The weather is getting warmer here, more like summer.  But there was a lot of commenting at breakfast at the almost record low this morning of 48 degrees. 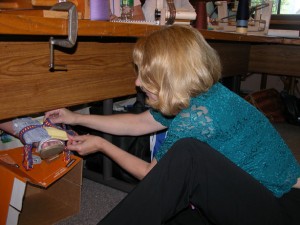 I got my classroom  set up for the all day Inkle Weaving class, and welcomed 17 students.  We dove right in, and by lunch time almost all were ready to weave.  One of my favorite New England Weavers, who is originally from England, 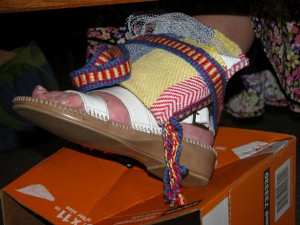 is Leslie who proudly informed me she was 18 months shy of 90!  She was happily working on her inkle loom when she said to me, “I wonder if there is a first aid station on campus?”  I sort of looked a bit panicked, and she very gently said, in her lovely British accent, “Well I sort of fell off the curb this morning, and I’m afraid my foot is swelling up.”  I looked down at the very badly swollen purple ankle, bulging out of her sandals, and we all jumped into action.  Someone had an ice pack in a cooler, I pushed it into one of my little handwoven bag samples, with the inkle trim handle, and wrapped it around her foot while someone called campus security.  Bless her, she wanted to stay and finish the class.  They whisked her off to the hospital, and three x-rays later, on a pair of crutches, Louise came back to class by 2pm with her badly sprained ankle all wrapped up, and continued the class.  We weavers all have our priorities…  We laughed about it tonight at the fashion show, she said her friends wanted to come pick her up and she said no, she still had to take another of my classes…

I had been told by friends that Smith College has an amazing Art Museum right on campus.  They weren’t kidding.  Imagine my shock when I walked around the walls and saw a Georgia o’Keefe, paintings by Edward Hopper, Max Ernst, Diego Rivera, Ben Shahn, Robert Motherwell, and Willem De Kooning.  And a wonderful sculpture by Louise Nevelson.  I had never seen any of these particular pieces before in an other exhibits so that was a real treat.  What a treasure.  And in the lower gallery, there was an installation by Brooklyn artist and Smith alumni Lesley Dill.  To say this artist’s work was powerful would be an understatement, her materials are largely found, and her voice huge.  Take a look at some of her images on the website of the George Adams Gallery.  And if you Google her name, there are lots of photos of images of her work available. 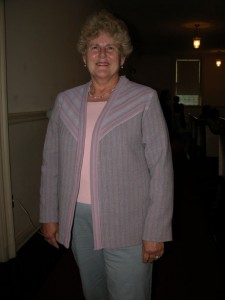 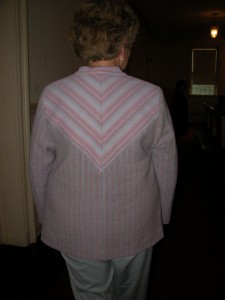 The informal fashion show was a treat, and one of the garments modeled was a great variation on the “Daryl Jacket”, the pattern I use for teaching my garment construction workshops.  Marjorie Wheeler modeled her jacket, she made the bias yoke in the front and back, the fabric is all handwoven, and she looked so happy in the jacket.

The final garment in the informal fashion show, was actually not a garment, but a guild exchange from the Mainely Weavers.  They paraded in a clothesline stretched from one end of the chapel to the other (odd place for a fashion show), and all the members displayed their miniature kimonos, made from what I understood to be three folded 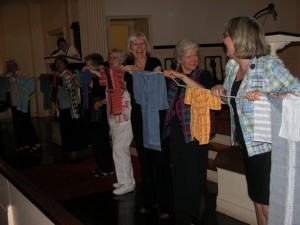 handwoven towels, based on an Erica de Ruiter article in Handwoven Magazine, which I believe they said was Nov/Dec 2007.  I did a search on Interweave Presses’ index, and I think this is the article, though I’d have to confirm it when I get home. What a great idea for a guild exchange!

The fashion show itself was wonderful, they always are, I don’t have photos, but as a judge, I can’t tell you how differently a garment looks when it is on the person who made it and coming down the runway, or in this case, the church aisle.  So many of my comments during the judging would have been different had I seen the garment on the real body it was designed for.  Looking at a garment on a table, or trying to try it on the body it doesn’t fit, doesn’t do justice to the garment or the maker.  I’m looking foward to judging the Michigan Conference fashion show because I will get to see the garments on the runway before I make my final selections.  Finally!

Oh, and the weaver/designer of that lovely plaid jacket I modeled in the previous post was done by Sharon Baker Kelley.  I didn’t know the piece was Sharon’s until tonight, and obviously I couldn’t say yesterday that we had given it the ‘judges’ choice’ award!  Congratulations Sharon!

I just got an alert, my dress, Frosted Florals is on the front page of the Threads Magazine website!  Thanks Tien!

The conference is going well, course I haven’t done anything all day but hang out, chat, and set up my class room.  It is beastly hot here.  I’d say 110 degrees in the shade.  And the poor vendors, are in an airless gym with no AC, and people are dropping like flies.  Still, it is a feast for the eyes, enjoy the photos, looms, yarn, shuttles, books, too much to look at! 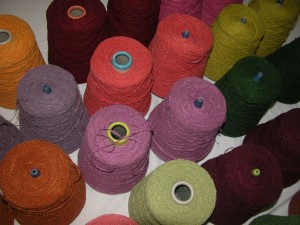 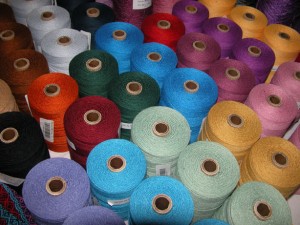 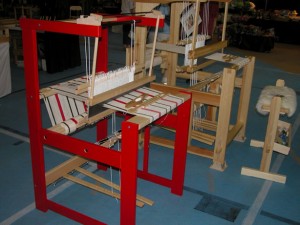 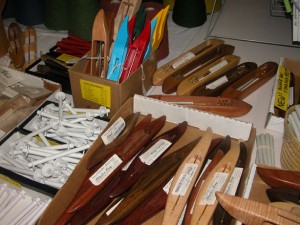 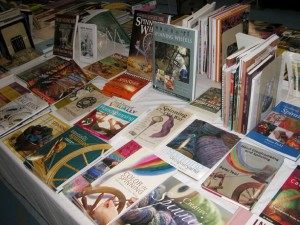 The cute looms are from Glimakra, I spent a lot of time in their booth, though I’m not in the market for a new loom, I can’t help but be impressed by their ability to keep up with new trends in looms, always thinking and redesigning, and they are always a joy to chat with.

I spent some time with Joanne Hall getting a real demo of their band loom.  I like this loom, and I think I’ll put it on my wish list, it is for making inkle bands, and has a warp and cloth beam so very long lengths of bands can be done without having to rewarp the inkle loom every couple of yards.  Hmmmm……. 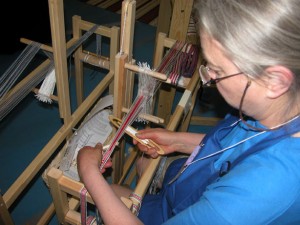 I was able to get back to the Faulconer gallery this afternoon to take a better look at the Small Expressions Exhibit, and grab a couple of gallery shots. 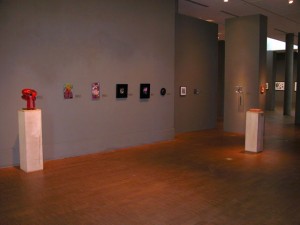 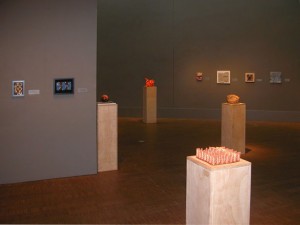 This is a beautiful space, and I enjoyed the intimacy they were able to achieve with all of these very small works, if you can believe, my tiny post card size works are in the first photo  all the way in the corner furthest away from the camera.  Sort of the last pieces on the wall on the left.  You can’t even see there are two pieces side by side.

So I don’t cause you any further eyestrain… 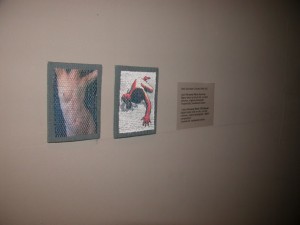 I got my classroom set up, and I have to say this, I have died and gone to faculty heaven.  I want to be buried in this classroom.  It is high tech, just popped my little pen drive into the system (and after much fiddling, etc.) my presentation came up on the huge wall, I played with the little wall switch for awhile, making the window shades go up and down electronically, the table space is huge, and there is a nice wall in the back to hang my garments for display. 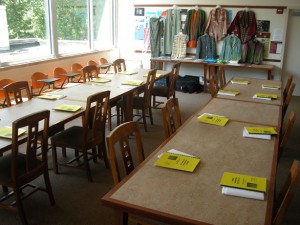 And as I walked across campus, I grabbed some shots of the gorgeous colors in the gardens, I think these would make beautiful palettes for fabric, especially the ones with the greys. 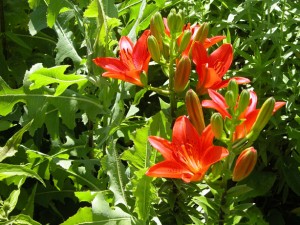 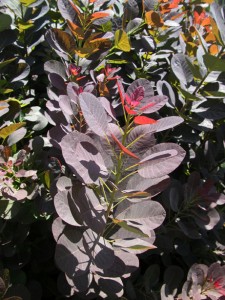 The keynote address is tonight, it is always a joy to listen to Madelyn van der Hoogt, editor of Handwoven Magazine from Interweave press.

I have to say, I adore mid-western weavers.  They are so great to work with, so helpful, and so kind.  Lots of smiles, and lots of hugs, though we are all doing virtual hugs because of the heat…   And there isn’t a lot of handwoven stuff being worn today, I can assure you.