This is a hard day for New Yorkers.  For the rest of the nation as well, but especially for New Yorkers.  We mustn’t forget, we can’t forget.  It is raining steadily here, from a nor’easter hitting the Atlantic coast, unlike this day eight years ago, where the day bloomed gloriously, blue sky, cool dry air, the most perfect day.  I had been offered the job as Features Editor for Handwoven Magazine that day, eight years ago, and as the days unfolded, my emails to Madelyn van der Hoogt, editor in chief of Handwoven Magazine from Interweave Press, netted this letter to the editor, written September 12, 2001.  It appeared in the following issue of Handwoven Magazine.

I live approximately 20 miles from ground zero. I put my children on their respective school buses and sat down with my morning coffee. My husband called to tell me to turn on the television and my life, and the lives of all my fellow countrymen were in that instant changed forever. I watched in horror as a second plane crashed into the symbol of the free world, a structure built to stand up to bombs, earthquakes, even a 747 direct hit. Within the hour, the World Trade Center towers were a twisted pile of ash and debris. All of us will remember this date for the rest of our lives, where we were at the exact moment we heard the news, the powerlessness, anger, and fear that gripped a nation who never thought it could happen here. I turned the television off, I couldn’t watch anymore. I went into my studio, my hair still in hot rollers; I had a class to teach at the university, in about four hours. I am a professor of fine arts in the fiber department at Montclair State University, an artist, and a handweaver. I sat down at my loom and began to weave. Although the structure I was weaving, an 8 shaft shadow weave, was complex, I blindly, numbly, and mechanically, treadled the sequence, threw the shuttle, and found my mind wandering back to the devastation occurring just over the river. How many friends, community members, parents of my children’s friends were in those buildings? I called my mother. We cried together, we watched as the horror of the day unfolded. Over the next few days I watched with grief, fear, anger, uncertainly, my whole world crumble like the dust of the mighty structures that stood like a beacon to the abilities of mankind.

I wandered aimlessly in my studio, unable to motivate myself to create, weave, sew, suddenly all of it seemed so pointless. I sat at the computer and began to write. Fiber is a slow medium for self expression. I am a fiber artist, my pieces take upwards of 6 months to complete. I was to teach a class that day to a new fresh group of university art students, mostly educators, and the first lesson was in two element plaiting. Basic under/over… We use newspaper strips. We make mats, vessels, enclosed forms. Over/under… I couldn’t face a class, I knew they couldn’t concentrate; most of the roads in this part of New Jersey were either closed or clogged anyway. The university cancelled the class. 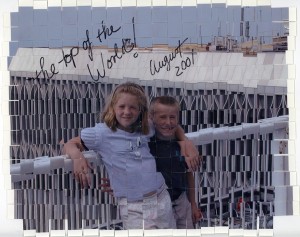 What is the role of the artist in a society that is grieving the loss of its countrymen and basic freedoms? I kept asking myself, since, it is the artists who record the events, question, criticize, and document the emotions of a nation. I am an artist and a weaver. It was a simple gesture, but for me a profoundly cathartic one when I went to the computer, printed two identical photographs of my children standing atop the South Tower of the World Trade Center less than three weeks ago. They had never been and I wanted to share New York with them. I sliced the two photographs into horizontal and vertical elements and wove, in a simple over/under pattern, the two photographs back together. Because of the process of the interlacement, the images have an eerie offset quality. I made sure my children’s faces were whole and readable, and the rest of the photo, the World Trade Center became shaky and unreadable. It was a small gesture. I shared the piece with my students on Friday. A different class, we had already met once. We cried, we shared, we talked about the role of the artist in our society, the role of the art educator helping students too young to write, who can’t express themselves any other way but through art. It was a very healing experience. As I thought about those elements passing over and under each other, the most simple of interlacements, the most basic tool of the weaver, I thought about how each of us must find a way to heal, to share, to communicate, and to move forward. I will go back to my loom; I will find comfort in the gentle rhythm of the shuttle. I will sit at the sewing machine again. Work will come from my hands again. I feel centered and strong and very, very grateful.

Earlier this year, I wove this image using the technique I’ve been playing with  for the last two years, an inlay technique, stripping treated silk fabric, printed with an image, and reweaving it back together again.  I believe I wrote about this piece in an earlier blog.  The piece is titled

“Remembering: On Top of the World” 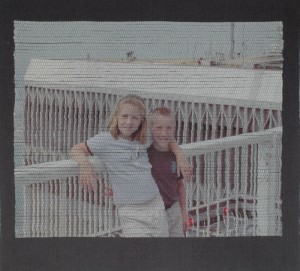 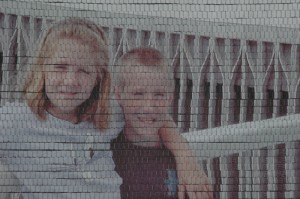