Most of the handweaving community by now is aware of the F & W Media debacle over the past few months, F & W Media owned just about every craft, art, farming, woodworking, and a slew of other publications in the country, with the exception of Taunton Press, still valiantly publishing up there in CT (They publish Threads Magazine).  F & W had been on an acquisition frenzy over the past few years, and had acquired Interweave Press, publisher of Handwoven Magazine, among other important fiber publications in knitting and spinning.  F & W declared bankruptcy early this past spring.  All of use who were owed royalties will never see them paid.  More importantly, the fear in the fiber community of our print institutions’ survival was a complete unknown.

In June, a “fire sale” as the legal rep I talked to handling the whole affair called it, (I was of course one of the people who will never get paid royalties due from last spring) was held, I think somewhere in Delaware.  I sat glued to my Google search engine for a week to find out what happened.  The F & W Craft Division, was successfully bid on by a company…

Macanta Investments, a private-investment partnership for Terence O’Toole and his family, put up $2.85 million for F+W’s crafts group that includes a network of 10 knitting, sewing and needlework magazines, along with nine quilting titles.

O’Toole is a managing partner of Tinicum Inc., an investment firm that bought a majority interest of F+W in 2014.

This mediapost article has a few more details, but F & W Craft Division including Interweave’s Handwoven Magazine will live on assuming the goal of this acquisition was to keep publishing.  The book division was sold just prior to the auction to Penquin Books, so hopefully it is in good hands.  A quick perusal of the Interweave Press website shows all the books gone, but digital content is still available for sale and is being heavily promoted.  These would include my five webinar series on Sewing with Handwovens.

There is a lot of buzz on social media that makes me sort of sad.  Full disclosure, I was the Features Editor for Handwoven Magazine from about 2002 to around 2007, writing in every issue for 35 issues straight.  Madelyn van der Hoogt was my editor and I enjoyed every minute I spent under her careful and watchful eye.  I’d like to say she was responsible for my career as a journalist, as I’ve now written more than 100 articles in various publications and have even branched into video.

But it all started at Handwoven Magazine.  The buzz on social media complains that the  magazine isn’t what it used to be, that the projects are mostly for rigid heddle weavers, that there isn’t a lot of content, that it is very thin, and a discussion ensues about cancelling subscriptions in protest, or stopping advertising, because, well no one reads the magazine anymore.  In fact I stopped writing for them because of the reduced rate of author compensation.  That said, Handwoven Magazine has been around for 40 years.  How do I know this?  An advance copy of the September/October issue is sitting on my desk because I have an article in it. 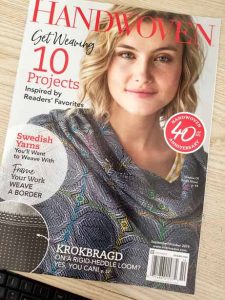 There has been no other weaving publication that has hung in for so long and provided so much content as Handwoven Magazine.  I have every issue on my shelf and it is an incredible wealth of knowledge.  Many of the issues are available digitally, so they don’t take up shelf space, but I’m a paper kind of gal.  My art and weaving library is huge, because I’m a writer and a researcher and a creative person and well, there is nothing like a spread of a half dozen reference materials across my floor or cutting table as I compare content for an article.  I did a quick perusal of this issue, their 40th anniversary, Issue XXXX number 4.  (Yeah I know that the Roman Numeral for 40 is XL which is also a size, and XXXX reads better!)

The issue is thin.  Publishing print isn’t what it use to be.  My favorite current weaving magazine is of course Heddlecraft, published by Robyn Spady, but that publication is digital only with no advertising.  It is theme specific, provides extensive drafts, and has some lovely features columns.  But I doggedly continue to subscribe to Handwoven because it still provides inspiration, articles, and advertising, so I’m on top of what’s new, who is selling what, who’s who and who is writing what, and I will often use one of their dishtowel drafts for my annual dishtowel warp.  This issue is about remembering.  It has a look back over the six editors of Handwoven Magazine, and comments from them.  It has projects that reference many of those editors.  It has a sweet article from Sherrie Miller, whom I adore, about the Weaving Hall of Fame, a look back over those who have contributed most to the craft.  I get a mention at the end, which I totally did not expect.  I have an article on Weaving a Memory.  It is a technique I’ve taught in the past, and have a full monograph available for more content. (The link is for the digital version, there is also a bound paper version available.) 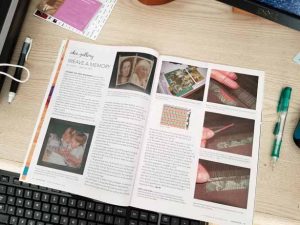 And there are projects, one rigid heddle, one for a pin loom, and plenty for four shaft looms and one for an eight shaft.  The ads are colorful and remind us of who is still out there selling supplies to handweavers.  There is a great look back over the 50 year career of Schacht Looms.  And a wonderful side bar about the decision to start offering projects at Handwoven Magazine, and why.  I never knew that part of the story. And Tom Knisely has a great article on weaving borders.  So here’s the thing.  There aren’t many print publications left.  Heddlecraft is digital only, and Weavers Craft will publish their last issue, #32 this year.  They also had no advertising.  You can still get back issues of Weavers Magazine (44 in total, have them all) and Prairie Wool Companion (16 in total, have many of them, still looking)  and the Weavers Journal (I’m still collecting them as well).  There is VAV magazine, a Swedish publication, really wonderful, which has been translated into English since 2006.  You can get back copies of that magazine from The Loom Room.  And so we have Handwoven Magazine.  It is important for the handweaving community to rally around and support what we have left, because even though you can find anything you want to know on youtube, there is something to still be revered and respected about holding the latest issue of anything.  I get very few magazines anymore.  I get this one. And of course, Threads.

And since I have every issue, I still use them for reference.  Especially my own articles.  Especially the Color Forecast.  I have almost all of the original content that was photographed for the magazine, the color chip cards and the yarn wraps.  I use them all the time for instant color and inspiration.  I just leafed through my binder and randomly picked the palette for Jan/Feb 2004 issue, called Retro, part of the Fall 2004-5 forecast. 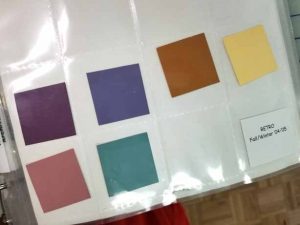 And I gathered all of the yarns I had on all of my shelves, leftover bits in bins, hand dyed skeins, and wound a scarf warp in four parts…  The last part was the supplemental ribbons. 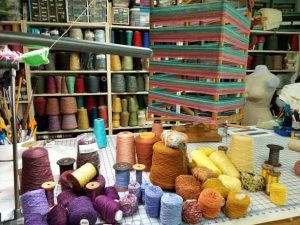 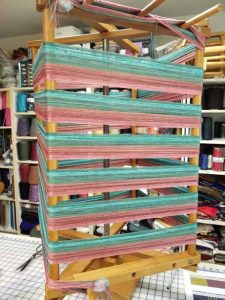 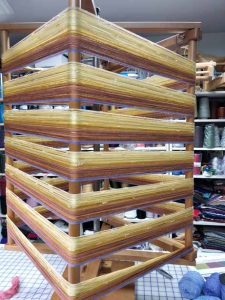 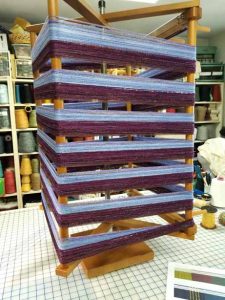 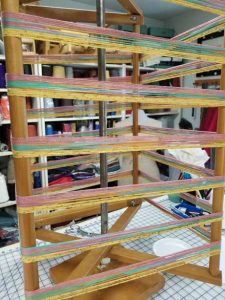 I spent yesterday threading this baby, and this afternoon I’m going to get it beamed, mostly because I don’t want 14 yards of warp chains lying around the floor to tempt my animals.  Hahahahah! 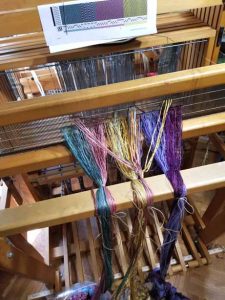 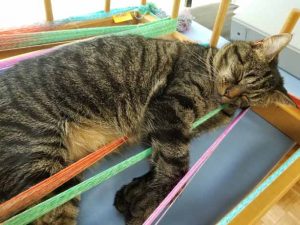 I often thought that it would be fun for Interweave Press to put together a digital collection of all of the forecasts I wrote, there are some pretty inspiring palettes.  I would know since I researched and wrote them!

I’m heading off to renew the Handwoven Subscription for our weaving guild.  I’m the treasurer so I get to write the checks.  Keep those issues coming…