Huge apologies right up front.  I have never posted two blog posts back to back in the same weekend.  Yesterday’s blog was a story of triumph, but there was lots more to tell on my week of extreme productivity. So indulge me this one…

I worked hard to get all of my floor looms filled with something interesting for the virtual HGA studio tour that we filmed back on October 8th.  That meant that every loom had something going on, and my daughter, who is madly prepping for this lecture next week, needed a floor loom or two to be empty, and I’ve got ideas of what I want to put on a loom that isn’t available.

So the only thing to do, is to just weave.  I had a couple cranky mishaps with a couple of looms, parts get old and worn, especially cords, and I’ll need to do a bit of repair work, or had to repair in the middle of a large piece of yardage, when the front crank broke in two in my hand… 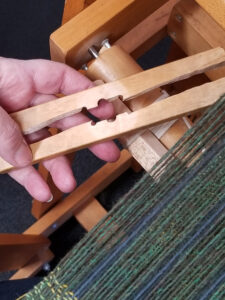 Despite roadblocks, I managed on Monday to clear one of the 4 shaft floor looms, of yardage that has been there for a couple of years.  It was a welcome site when the knots came over the back beam! 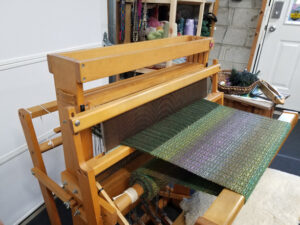 I pulled 7 yards off the loom, and popped that baby in the washer. 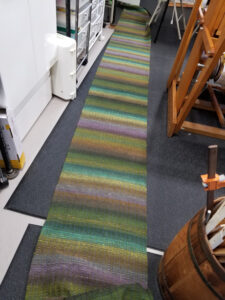 The end result is really pretty.  A flower garden.  I have ideas for the yardage, but nothing set in stone. 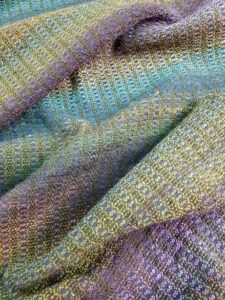 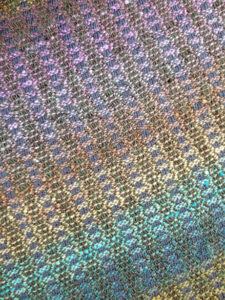 In case you want the details, I wrote up the yarns and the draft back in a post in January of 2019, scroll way down to find the information here…

So Tuesday I had to set up a complicated Zoom class, which I was to give that night, the night of the election here in the states, for a group in Toronto.  I spent the morning getting the camera and lighting right for the live demo on the loom.  The topic was “doup leno”, a structure I wrote about in a lengthy article for Heddlecraft Jan/Feb 2019 I believe. 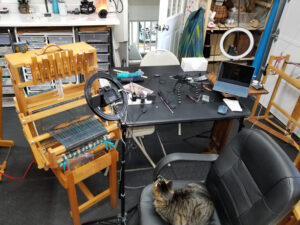 Once I was set up, I decided to kill a few hours until showtime, by weaving on another floor loom.  And pretty soon, the knots were up and over the back. 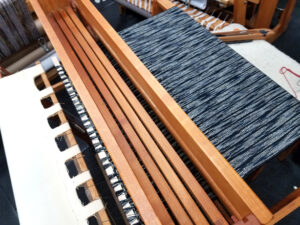 This yardage was one of the ones I put on the loom to play around with one of the new yarns from Silk City Fibers.  I combined the Nile cotton tape with their traditional Skinny Majesty Variegated, in a simple plain weave.  And after some extensive testing, which I talked about in an earlier post, I ended up using Silk City Fiber’s Deluxe Wool Crepe.  Which is Merino and rayon.  This is my new favorite weft.  Highly recommend.  I can’t wait to do something with this fabric.  It feels amazing and the wool crepe weft keeps the rayon in check. 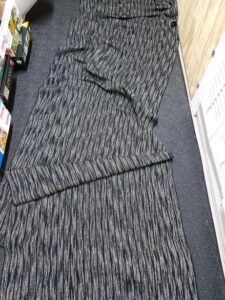 Anyway, because the yarns came from Silk City Fibers, I wrote up the specs and the draft for what I’m calling Antique Jewels and it is available in my eShop for free.  Click here. 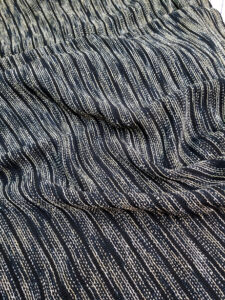 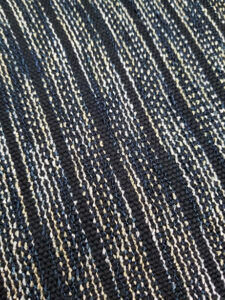 Wednesday was a tough day.  I had to teach again in the morning, after a very successful, at least I thought so, class Tuesday night.  Because no results were declared Tuesday night, and I didn’t expect them to be, I didn’t sleep all night, and I suspect neither did most people in the US.  So bleary eyed I logged onto my class Wednesday morning, and I believe all went well, and this time no landscape crew came by to blow my leaves like the class the week before.  Wednesday night was my guild meeting and we had a terrific program with an old weaving friend of mine, Sheila O’Hara.  I’m blown away by how easy it is to bring a guest speaker from 3000 miles away for an evening lecture.  She was fantastic.  We are only about a year apart in age, and studied the fiber arts in college about the same time in the 70’s, it is amazing how different our paths took as weavers.  She was one of the first to truly embrace Jacquard weaving.

So Thursday, prior to the debacle I covered in yesterday’s post , I managed to clear yet another loom.  This one was also the result of a challenge with yarns from Silk City Fibers.  An odd combination, but I took their new poofy Cotton Bambu, and combined it in a light/dark 8 shaft shadow weave with their old standby chenille, in a variegated color.  The two worked perfectly together, and I soon had the knots over the back beam as well. 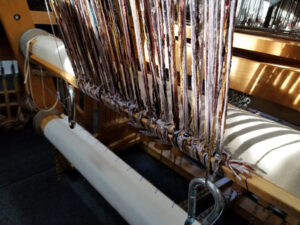 The fabric was a bit coarse when I pulled it off the loom, kind of what you would make a carpet bag from, but never the less, I went to the washing machine and tossed it all in. 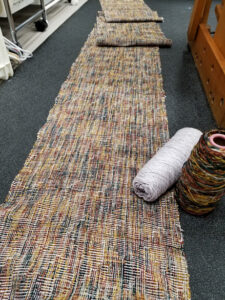 What came out is the most gorgeous, glorious fabric you’ve ever felt.  Cotton Bambu doesn’t have any body weight behind it, but in this context it became gorgeously flexible and mixed with the velvety feel of the chenille, I can’t wait to weave more in a larger piece of yardage.  I wrote up the specs for this fabric as well, which I call Shadow Tapestry, and again, the PDF download with the draft is free.  You can find it here. 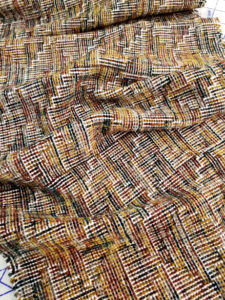 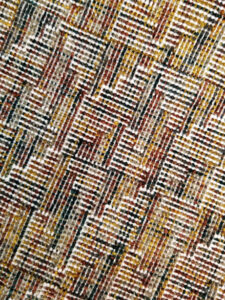 I’m off to the studio to weave another scarf on one of the other floor looms, and then do stupid stuff like clean my bedroom and bath, annoying Sunday chores, though I can’t wait to remake the bed with the new sheets I just got from LL Bean.  Portuguese organic cotton flannel.  Looking forward to a good night sleep tonight. I had a set from the last couple of years, but when I went to change my sheets with the change of season, from linen to cotton flannel, I discovered that my daughter had swiped them.  They were on her bed.  So shopping I went for another set!

Stay safe everyone, one of my closest friends was just diagnosed with Covid.  These are scary times…  Stay tuned…

First, a huge thank you to all of my sewing friends who have stopped their lives to make masks.  I feel hugely guilty I’m not participating, because, as I explained in the last post, I don’t have any materials, my daughter used them all a couple months ago for Australian Marsupial pouches for all of the injured critters in the fires.  I’d have to go out to the store to procure supplies and that would really defeat the point of hiding at home.  My daughter was able to find a small pack of elastic in the bottom of a craft bin, and used some scraps to make masks for us.  She has a fine metal’s bench and rolled floral wire for the nose piece. 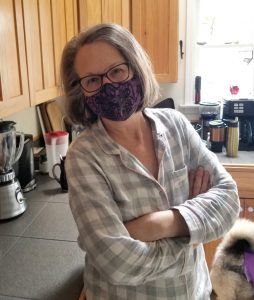 And so I’m working harder than I’ve ever worked, or so it seems.  The big news is I actually managed to, after running a test by a bunch of trusted sewing friends, launch a pattern today.  I started with the simplest one I have, to see how this all works.  I edited the directions and the intro to the pattern about 19 times.  To the point where I just didn’t care anymore, which is a dangerous place to be, I can assure you.  So for better or for worse, you can purchase the PDF download of my bias top.  More patterns to follow. 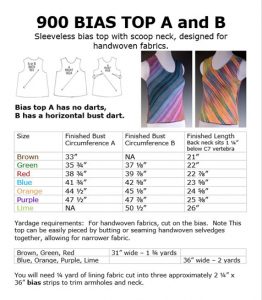 The pattern is available for purchase here, and the directions, which will continue to be free, are now on my website.  It is easier there to keep updated.  And while I was there, I redid my Extra’s page, because the amount of stuff on it was becoming untenable.  Found some fun stuff I had forgotten about, like this essay I did on making paperdolls as a kid.

I’m always open to opinions and edits.  Obviously the pattern will work for commercial fabrics, but I have always been a handweaver who works with the handwoven community, so yardage requirements are specifically for handweavers.  We are working on the 500 vest now, as I write,  that’s the one with the armhole band. We are into the fourth round of edits. 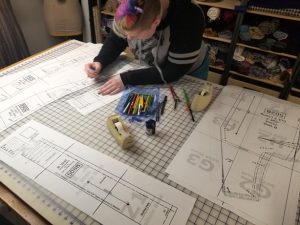 Meanwhile, we are fixing puzzles like crazy, I always have one up in the living room.  The latest one, a lovely gift from my sister, is really challenging, I’m sorry to say not my favorite.  It is all shades of grey. Dalmatian puppies.   Except for a couple little areas with pink feet.  I much prefer color.  Lots of it. 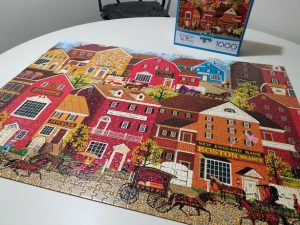 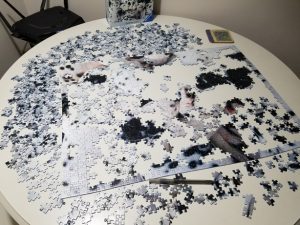 I finished my dress.  This was a challenge as well.  Just about everything in my life right now is a challenge, but we weavers are made of stern stuff, and we know how to pick up a shuttle and carry on…

I want to say it takes a village, and after my last blog post, and how I wasn’t sure how I felt about the leather, one of my long time friends, Sheila O’Hara, extraordinary weaver who wrote the book on weaving contemporary Jacquard, before digital Jacquard looms became available, casually commented, “Why don’t you embroider on the leather?”  Yeah, no.  Embroidering on leather would be really really challenging, because you can’t sew into leather easily, usually it involves pliers.  BUT…  I could couch yarns, like the kind I wove with…  This was a nail biter, I did samples and tests, but small ones, I didn’t want to waste the precious leather, and once I started in, there was no going back, you can’t rip stitches out of leather because the holes will show.  This was quite the nail biter… 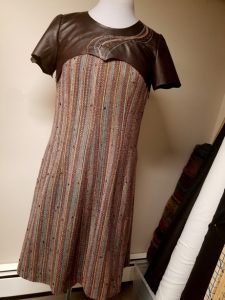 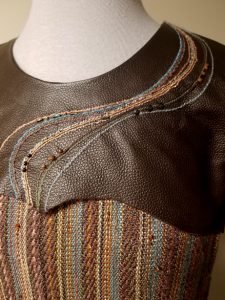 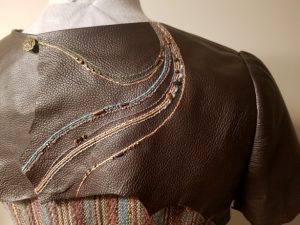 I’m so happy with how this turned out.  And the closure on the back worked out brilliantly.  One of the couched threads as it came off the back neck, I was able to crochet into a loop, and couch it back on to cross the upper back again and end up back at the neckline.  Oh, and the dress has pockets! 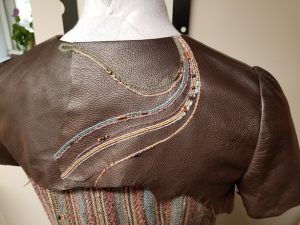 The dress fits like a glove.  It actually isn’t supposed to, but I’m packing on a little weight here, because all I’m doing is eating and sewing and sitting on my butt by the computer rewriting directions and intros and cover pages.  I really have to go back to online yoga, since my local yoga studio is shut down for the quarantine.  And stop eating cookies and drinking wine…

And so I was able to cut out the many pieces to make this motorcycle vest in the leftover fabric from the dress and the leftover leather. 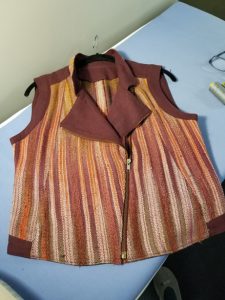 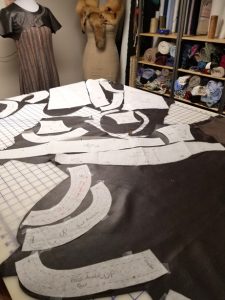 I still have almost a full skin and a half to do something fun with.

I’m having fun sitting and sewing, and the 16″ metal separating zipper arrived today from WAWAK.com. 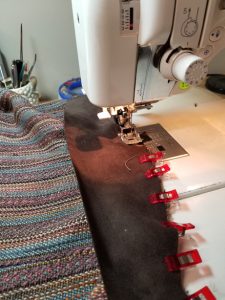 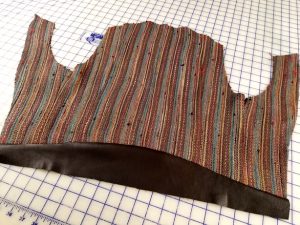 And so dear readers, I hope you stay safe, more than 2300 people have died in NJ, many of them first responders, EMT’s, hospital staff, store employees, police officers.  I hope where you live it all seems overblown.  I can assure you, it isn’t here.  We are a dense state, and are suffering for it.

Play with yarn, do whatever it takes to be as distracted and productive as you can.  I’ve actually started to pick salads from the garden.  There is something renewing about that.  Stay off never ending news, it is really really painful.  For those of you making masks, I bow down with respect.