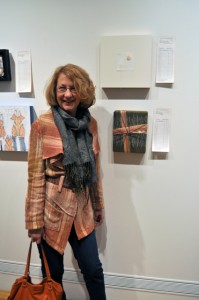 Almost every night, since my last post (was it really almost a week ago?) I’ve had a major event on the calendar.  Saturday had three events back to back!  Friday night, I attended the reception at the NJ Center for the Visual Arts in Summit, NJ, for the artists who donated work for the Blank Canvas Benefit.  You may remember my blog post last month while I worked on my piece.  Since the handwoven scraps used in the artwork were from one of my jackets, I thought it would be fun to wear the jacket to the reception.

It was great to see all of the other interpretations of the claybord we were given to work with, we could pick the size, and many of the artists chose to use the claybord as a flat box/container, as a standing shadow box, as a canvas, some two sided, and there was my piece, wrapped like a present, completely encased in fabric.  The food was delicious, and in any art venue, there are always interesting people to meet and chat with.

Saturday morning was the holiday party for my American Sewing Guild neighborhood group.  It was a pot luck luncheon, and a lot of fun. 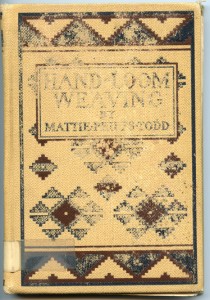 One of the members had been to a book sale, and she saw this little tome and because it said Hand-Loom Weaving on the front, she thought it was something I could use.  She herself isn’t a weaver.  It is little kindnesses like this that make the world a better place.  I was THRILLED!  I have never seen this little treasure, written by Mattie Phipps Todd, in 1902.  The book was revised in 1914, and that’s the version that you see here on the right.  It is a small little book, and it primarily focuses on teaching weaving in a classroom situation, using the new modern loom, which looks remarkably like one of the 25 small frame looms I have stacked up on a shelf for those occasions when I am demonstrating to a school group.  They have end rods that run through the frame to keep the weaving square, and adjustable end caps so the weaving can be sized.  The book, discarded from the New City Free Library, in New City, NY, (I’ll bet that’s a story in and of itself!), starts out with a fascinating chapter called “A Chat on Weaving”.  Small phrases in the side bars act like little highlighters, phrases like, “Community feeling continued”, and “Nature knows no hurry”.  Since this is a teaching manual, there are lots of phrases like “A child’s work should be suited to his capacity, without regard to grade”, and “If you would develop morality in a child, train him to work.”  This particular paragraph gave me  a huge smile:

“The child not only recognizes the value in honest labor, but his sympathy with all labor is aroused through his own efforts and through the stories told of weavers in all lands.  He realizes, also, although in a limited way, the interdependence of the whole world.  If the sun did not shine, and the rain fall, there would be no grass.  If there were no grass, what would the sheep do?…

Could it be this little treasure, discarded long ago from a library in an unknown city, holds the key to world peace?  🙂 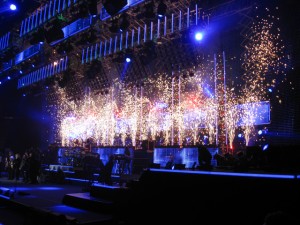 Saturday afternoon my husband and I drove to western NJ, where we attended an annual holiday gathering of friends, more interesting people to meet, share, and enjoy.  We raced back home, in time to meet my step-sister and her guy, have a quick bit to eat, and race over to the IZOD center to watch the holiday extravaganza of the Trans Siberian Orchestra.  Wow!  I actually had never heard of this very popular orchestra, a combination of rock, opera, classical remakes of the greats, Beethoven, Tchaikovsky, with an added twist of pyrotechnics, fireworks, laser lights, and some pretty mean guitar work. The newest member of the Orchestra was a keyboardist from Russia who began his number with a rapid fire run on the keyboard of the third movement of Beethoven’s Moonlight Sonata! 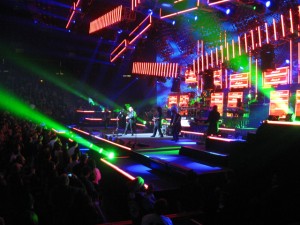 Our seats were amazing, and the moving banks of lights, parts of the stage rising up, and walls of video images, made for quite the show.  I enjoyed it a lot, and it really set the stage for the holiday spirit.  The whole first half of the three hour show, with no break, was a lovely Christmas story of an angel flying the world in search of world peace. 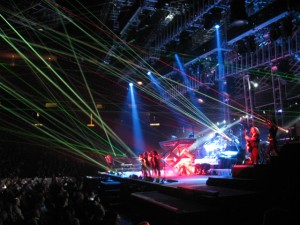 Sunday I set out for my recorder consort rehearsal, we have a performance Friday night, and was horrified to see the havoc the unexpected freezing rain was having on the roadways.  I almost turned around a half dozen times, but decided it was more dangerous to do that than just keep on going.  I’ve never seen so many accidents.  When SUV’s are creeping along at 20 miles an hour on a slick interstate, with their flashers blinking, you know something is up!  And once I made it to Morristown, the sidewalks were complete sheets of ice.  I teetered along, digging the four inch spike of my new killer boots into anything I could to stay upright.  I made it to rehearsal, late, but safe, and by the time I headed home, the road crews were out spreading copious amounts of road salt and the traffic began moving at a steady pace of 45 mph. 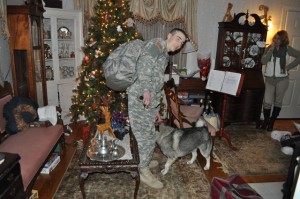 Sunday afternoon, my son returned from his weekend at the Army National Guard.  This is his last weekend there, before he ships out to Boot Camp on January 4th.  It is the first time I’ve seen him in uniform, and I will say, there was a little bit of pride and a misty eye, my son has grown up.  That’s me over there lurking by the front door.

Sunday night, I had the annual holiday gathering with my “mom’s group”.  This is a group of six powerful women who all raised their kids together, meeting monthly for lunches for about 15 years, and then, once jobs took over, and crazy school schedules took over, a quarterly dinner is about all we can manage.  Still, there is a bond there that goes back 20 years, and we celebrate each time one of us hits a birthday milestone.  We celebrated Patty’s 50th birthday as well as the holiday, and everyone loved my coiled hot mats I’ve been working on for the last couple of weeks.

This morning, I’m about to shower and head out to the Frances Irwin Handweavers annual holiday luncheon, I’m really looking forward to that, and I actually bought an additional luncheon ticket for my husband, he has never attended a guild function, and I know there will be other DH’s there, so I decided it might be fun to have him along and accompany me on the hour long drive to Pennsylvania.

Tomorrow night is the High School Holiday Concert, my daughter will be playing the trombone.  And Friday night is my recorder consort performance.  Saturday we have tickets for a performance of the Baltimore Consort at the Cloisters in NYC, you cannot imagine how spectacular an early music performance is in this particular venue, the vaulted stone ceilings of the 15th century cathedral like space, it is positively haunting.

And tomorrow is the one year anniversary of this blog.  I have completely enjoyed the year, writing about my creative adventures, as they parallel my life and all of its crazy meanderings.  And I find it a great resource for me when I can’t remember how I did something.  Makes for a great record keeper… Stay tuned…