For a day that started out poorly, it ended most spectacularly!  I didn’t sleep well last night.  I had too much partying, more alcohol than I usually consume (which is almost nothing, hence the problem) and rich food, and too much of it, and I laid awake most of the night, trying to sleep, but finally giving up and reading. (Joan Dideon’s Year of Magical Thinking).  Which meant I was a wreck in the morning.  And my daughter called from school to have me make a doctors appointment to have her checked for strep.  So by the time I finally got up, made the appointment, drove to the HS to get her, took her to the doctor (she did not have strep, only a virus, and the doctor sent her back to school) and drove back home, it was lunch time.  My plans of all I was going to accomplish were rapidly sifting through my fingers.  And on top of that, a miserable cold rain made everything soggy and frigid.  One of those bone chilling days where you just can’t get warm.

But I decided to try to make some headway on the new website.  I only had four pages to go, and one of them was pretty critical.  My schedule.  I hadn’t updated the old site in awhile, and a lot needed to be entered.  Once I decided on a format, I just had to look through all my files and emails to plug in as much information as I had, all the dates and contacts, and the topics I was teaching.  Then to simplify the site, I linked PDF files for the prospectuses instead of all the lengthy descriptions like I had on the old site.

So I plodded along, got my son to take my daughter back to the HS tonight for jazz band, and sent him out for a Chinese Food run.  And I continued to plod…

The upshot is, I FINISHED THE SITE!  I can’t believe it.  I’m done.  I’m so proud of what I’ve done.  And I put a temporary home page on the old site to direct to the new site, eventually when I’m sure everything is correct, and my husband returns from New Hampshire, I’ll wipe out the old site, and park it with the new one, so whether you go to www.weaversew.com or www.daryllancaster.com, you will end up in the same place.

Just as the last file uploaded, an email came in from Sandra Bowles, executive director of the Handweavers Guild of 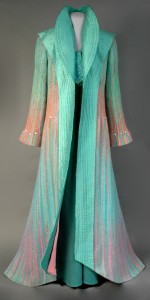 America, Inc. telling me that they have approved my presentation for the Challenge Project I did last year for them, and I’m OK to market the presentation on a CD, to any guild that would like to show it for a guild meeting or program. I have to say that Sandy went out of her way, doing way more than I asked, by carefully working through all 81 slides, and proofing, editing, and watching for copyright issues, in a very professional and thorough manner.  I am very grateful Sandy.  So, give me a few days and I’ll have the CD up on my eShop.  I think I’ll offer it as both a PowerPoint and a PDF file on the same disk.  If you are a member of a guild, weaving, sewing, whatever, or just plain curious, this CD presentation is intended to stand alone, without me, as an inexpensive hour and a half program, following the year long challenge presentation, where I was paired with a designer I had never met, given yarn I’d have never picked to work with, in colors that don’t appeal to me, and we had a year to come up with a runway ensemble to debut at the Convergence 2008 Tampa Bay Fashion Show.  The 81 slide presentation starts with the design process, which was completely done with emails, and then the step by step sampling for the woven fabric, the design and pattern making , the cutting out and construction of the coat and dress, and the final embellishments, hand felting and beading that kept my partner Lorretta Dian Phipps up too many nights in a row.  There are some great production photos, and I’m really proud of the finished ensemble and the presentation as well.

And I even got an hour off to watch the latest installment of the new HBO series, #1 Ladies Detective Agency, starring Jill Scott.  (I had recorded it from Sunday night since I was driving to the airport while it was airing). It is as delightful as the series by Alexander McCall Smith, and I have to almost say, I like it even more.  The gentle life in Botswana, the interesting cases that fall into the lap of Precious Ramotswe, the endearing characters, and the spectacular scenery all keep me captivated and yearning for more.

Dare I hope to get the lining done on the coat tomorrow?

Daryl, congratulations on finishing the web site! It’s beautiful, functional, informative, organized, all together pleasing. It must have been a really big job, but well worth the effort.
Congratulations on the CD project, too! I look forward to seeing it.

Congratulations on the CD project. I realize how much you wanted to have the ability to market this project that you put your heart and soul into. And, I’m sure the photos are up to your expectations!

Can’t wait to look at your website and to check with the San Diego guild regarding purchasing the CD for a future program or even a series of some sort.

Some well deserved time off, and the weather was absolutely gorgeous.The pantaloons are finished, and the placemat wars have begun.