I blogged a lot about the major studio changes last winter, HVAC was installed as I was walking out the door to teach in Oregon the beginning of March.  I returned from Oregon just as the world was beginning to shut down and so embarked on a five month effort to convert all my patterns to digital downloads.  So though I had this brandy spanking new shiny place for all my looms and fiber equipment, with the basement as the new sewing room, I never really got a chance to use it.  It kept calling me.  I felt really guilty.  I kept thinking about all those gorgeous magazine worthy studios in houses where I stayed, and their owners admitted that they didn’t actually do much in them.  I hoped that wasn’t the case with mine.  Most of my days since the quarantine began have been sitting right here at my computer in my office generating some kind of content.  Sigh…  Creative in a way, but not what I really want to do. 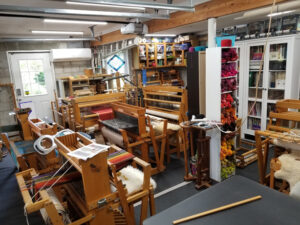 Enter an email from Silk City Fibers.  I’ve had a very long relationship with them, and I’ve blogged about recent encounters with them, but this time they wanted me to consider being a “weaving influencer”.  My discussions with the head of Lion Brand Yarn marketing turned into, send me yarn and I’ll see what I can do with it.  And blog about it, or write about it, or give them usable content, or whatever.

What a shot on the arm that was, and in one of my last posts I blogged about the fabric Summer Rain that I got on and off the loom in record time.  It was the first time I had set up a loom since I built the new studio.  I ran into a lot of, gee, where did I put that tool…  but ultimately the studio did its job and created a brightly lit, comfortable and easy place to do what I do best.  So as I wrote in my last post, the Summer Rain fabric is finished and sitting on the cutting table in the basement waiting to be cut and sewn into something fun.  The draft is available in my store, and any of the drafts/fabrics that result from the relationship with Silk City Yarns, especially if they are giving me the yarn, will be available for free.  Add it to your cart, and there won’t be any charge at checkout.  You’ll get a link in your inbox and you are ready to go!  Find the PDF notes and draft here. 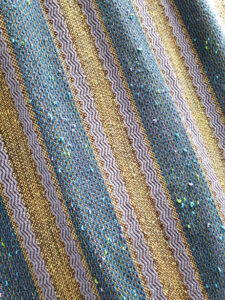 Meanwhile, having discovered the joy of my new studio, and having finished the scarves that were on the 8 shaft small floor loom, I decided to wind a new warp, this one called Autumn Harvest, based on a forecast from my Handwoven Column back in 2004.  It is on the loom, and it just glows!  The draft is available here. 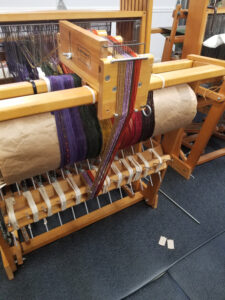 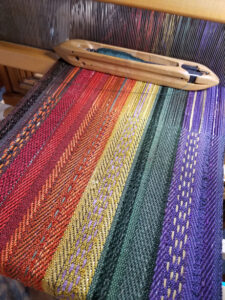 I got more yarn from Silk City Fibers.  A lot of it.  I think of nothing else…  I gave them a general idea of what I’d like to work with based on what they want to promote, mostly their newest yarns, and I gave suggestions of color combinations, but I get what I get.  Which is just wonderful fun.  I work best designing with what’s immediately in front of me.

Right out of the box I grabbed this orange Cotton Bambu, (one of their new yarns) which is a little heavier than I like to work with for garment yardage, but I successfully used it in the Summer Rain fabric in a 4 shaft mock supplemental, and I thought I’d like to expand on that for a full yardage.  So I added Saphira, a viscose and polyamide variegated with very cool slubs, and a gorgeous copper metallic called Radiance.  The weft is a beautiful cotton yarn called Nomad, which I actually prefer to Bambu 7, it has way more body and the same 2100 yds/lb yield.  Under the studio lights the fabric just glows, but it doesn’t really show in the photo.  Trust me it is head turning when you see it in real life.  It is a 4 shaft structure, and I’ll eventually post the details as a PDF download like above.  I’m calling it Confetti. 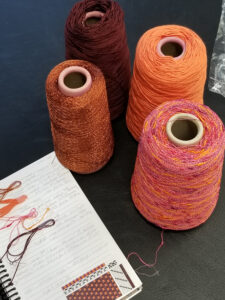 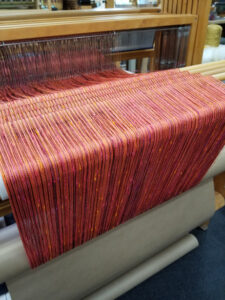 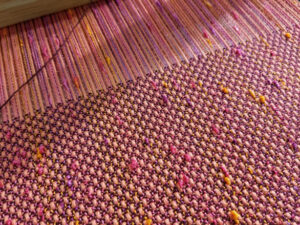 Meanwhile Silk City wanted to know if their SuperMerino yarn would work in a Rigid Heddle loom with an 8 dent reed.  I don’t do Rigid Heddle weaving, but I have a table loom with an 8 dent reed, and I can set up a two shaft plain weave.  There is enough for two scarves, the first one we doubled the yarn (Brianna did the grunt set up here).  She has a heavy hand with the beater, so I’ve taken over and using a double weft, the effect is quite lovely.  I believe their SuperMerino is superwash, but I’ll let you know once the scarves are off the loom. 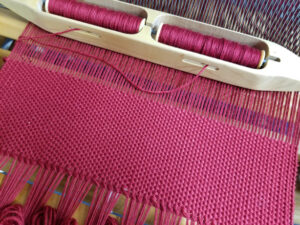 Meanwhile in the bag of yarn from Silk City were these two, Nile cotton tape in Onyx, and Skinny Majesty variegated in a color called Antique Jewelry.  I wound the 6 yard warp alternating one of each, and after it was wound, I changed my mind.  Nothing like redesigning after the warp is wound.  I used every inch of both cones, which is always fun, to have no leftovers!  And if you are wondering about the contraption on the back beam, I use the Harrisville tensioning device for perfectly tensioned warps every time.  (I’m a front to back warper).  Problem is, this is the new to me 32″ Tools of the Trade loom, one of his really old ones, and I have tensioning rods made for the 45″, the 36″ and the 25″ looms.  Not the 32″ loom.  So using the second back beam from the 36″ loom to support the set up of the tensioning device with the 36″ rods, and a number of C Clamps, we got the job done.  (I confess it was all Brianna’s idea). 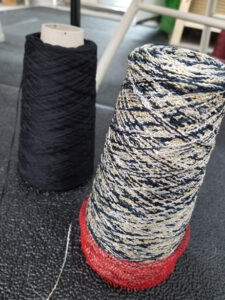 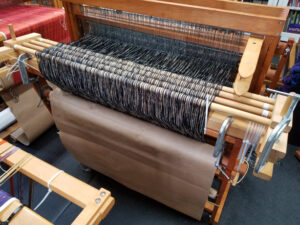 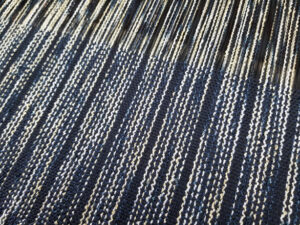 So I threaded the updated design, beamed and then began to test a number of wefts they offer that have a wool/protein content.  I’m a big fan of putting something in the weft that will give a modest amount of fulling to really keep slippery rayon fabrics under control.  I have used Zephyr merino/silk from Jaggerspun, and Webs Colrain Lace Merino/Tencel, but wanted to try out some of the Silk City Fiber offerings.  Left to right is Nature’s Way Merino doubled, Eco Cashwool, SupraMerino doubled (which I believe is a superwash), Baby Alpaca doubled, and Wool Crepe Deluxe (80% Wool and 20% Viscose Rayon). 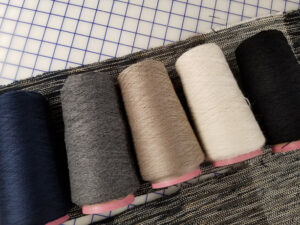 I kept the first sample right off the loom (top), the middle sample shows some hand washing in warm water, and the last sample was thrown in the washer and dryer with a load of towels.  I love knowing what a yarn can do.  I’m ultimately going to use the black Wool Crepe for this particular fabric, but the Nature’s Way Merino (far left in navy) is awesome.  The Baby Alpaca (the ivory one) didn’t shrink or full, but it is fluffier than an angora rabbit’s butt.  I’m not a fan of superwash, so I probably wouldn’t use the SupraMerino (the middle one) unless the goal was a washable baby blanket, it is really lovely for that kind of purpose.  And I liked the Eco Cashwool as well.  This was a test I’ve wanted to do for a long time, and I’m grateful for the opportunity. 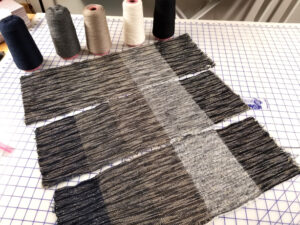 And of course, this loom still has fabric on it that I really should weave off, but there is something about full looms that make me smile.  My babies have been naked for far too long.  This is a wool warp with Noro Taiyo Lace weft.  January of 2019 to be specific. I’ve blogged about it here. 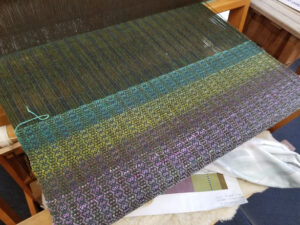 Assuming the internet gods are cooperating on Tuesday September 1st, I’ll be the featured guest on the Shi Show, which airs live at noon daily on the Lion Brand Yarn Facebook page.  I’ll post the link when it shows up on Youtube or you can tune in at noon EDT.  I say if the internet gods are cooperating because three times in the last week, there was an area outage, and though I still have some unresolved internet issues, Like I can’t get my printers to connect, the tech guy came yesterday morning and the whole system went down as he started to work, area wide I was told, and so he could accomplish nothing.  He is supposed to come back today.  He texted me that he is having issues at his house, different carrier, but his power and internet are failing.  And there are no storms, nothing that should cause these constant outages, but there are seriously weakened trees and limbs just randomly fall and take out the grid for whatever period of time you need it.  We were successful last weekend in running new lines in the walls, upgrading switches and network cards so all the important rooms and devices are hard wired for ethernet at 1GB of speed.  Brianna ran the last line herself much to her complete amazement and satisfaction.  She is her father.

And so, I’m looking in corners of the studio to see where I can pitch a sleeping bag.  This is my new escape, a place that the world stops spinning out of control, actually the only place in the whole world where I have some control, and nothing in there needs electronics or power to actually operate.  Maybe the bobbin winder, but I do have hand cranks for that…