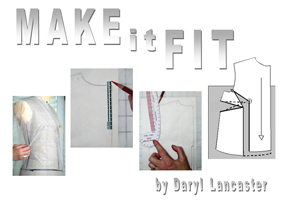 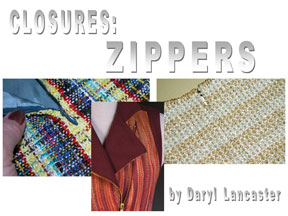 So another two days spent with my butt stuck in the chair, my hand paralyzed in the shape of a mouse, and more of the letters worn off my poor wireless keyboard.  But, I did get two important pages done in the new site.  The 1-1 1/2 hour lectures page, and the 2 – 2 1/2 hour lectures page are entered.  What a job.  The worst part was finding the original images I used for the prospectuses, there are just so many times you can save .jpg’s, and they lose a considerable amount of information.  So I always like to start with the original file.  But where among the thousands of images I have stored in about 5 different back up locations, could each of the images be hiding?

It’s like that in my studio, “I know it’s here somewhere…” “I remembered seeing it in 1994″… “Whatever happened to that…”  Then of course I become a woman possessed.  I won’t rest until I find the yarn, fabric, tool, image, whatever is lurking just out of site…

Besides spending the day searching through my vast archives for original files of some of my images, I also hunted around the studio for my supply of upholstery braiding.  I know it’s here somewhere.  I have to do an emergency costume for my son who plays the coachman in a performance of Cinderella.  Yes, the same son with the car in the previous blog.  I have to make a pair of pants to match a very old Lieutenant’s Doublet from Van Horn and Sons Theatrical Costumers.  The jacket is in tatters, I’ll do my best to repair, but they need me to construct a pair of pants that will look like they go with it.  So far, I haven’t found the braid.  Next check is the attic, and oh boy, there are amazing things stored up there…

Speaking of my son, he announced yesterday that he is planning to join the National Guard.  Well, I’ve been a bundle of mixed feelings all day, part of me knows that this would really be great for him, and part of me is scared to death.  So, I’ll just focus on the costume for today. 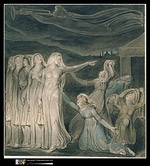 I am planning an excursion into NYC over my daughter’s spring break, there are a couple of fiber shows I want to catch, one at the Cooper Hewitt called Fashioning Felt, and the other, called Seduction at the Museum at FIT.  While checking out times and which days they are closed, I checked the MET to see if there was anything new of interest, and I found that they have an artwork of the day, which can be posted to your Google reader, or whatever you use for keeping track of such things.  So, today’s image came up

Somehow in all my years of Catholic School, and my years teaching Sunday School in the Reformed Church in town, I never came across this parable.  What’s with the 10 virgins?  So I did a quick search on Wikipedia, and got the scoop, it is a really odd analogy for being prepared for the second coming, but I loved the watercolor. And the whole idea of 5 wise and 5 foolish virgins waiting for a bridegroom who is having on-time issues, has got the creative juices really churning.  So now I have something else to look forward to, a new work of art every day, just go to the website for the Metropolitan Museum of Art, and subscribe to the artwork of the day feed.  This was number 3,000 something, out of 130,000 plus artworks.  I should live so long…

I went to the Jockey Hollow Weavers Guild meeting tonight, and the speaker was Barbara Elkins, the woman who started WEBS.  If you are a handweaver reading this blog, you know about WEBS, “America’s Yarn Store”, a 30,000 sq. ft. facility in Northhampton, MA.  When I do buy yarn, I probably buy from them, and it was really great to listen to Barbara talk about how she and a fellow weaver started by renting out looms in order to get more money to buy yarn.  That was 35 years ago, and in their garage.  It was a great story, and I love the store, I’ve been there, Pioneer Weavers meets in the store, and I taught a jacket class for them a couple of years ago.  Barbara was wearing the jacket she made in the class, tonight at the meeting. They are having their 35th anniversary sale, the email just came in my box.  Beware, their sales can be quite toxic to credit cards!  Seriously, they have a great website for ordering and terrific customer support, and I usually get whatever I order within two days. (That would be east coast).

So as I’m driving home from the meeting, in the cold dreary steady rain, visibility zero, I suddenly had a panic attack.  The placemat exchange is due at the June meeting, this was the April meeting.  That means my daughter and I have exactly 8 weeks to weave 14 more placemats.  You do the math…  So, out with the whip, and lets get cracking…

I’m here, I know I didn’t post over the weekend, but it sort of got away from me.  It was a busy weekend, lots of little appointments on the calendar, but was able to get into the garden on Saturday and start the process of cleaning up the place.  I started with one length of the vegetable garden, and got all that brush and debris cleared away, pulled the new weeds, and generally had fun getting really dirty.  The sun was warm, and it felt good to be outside.

I picked up my husband and son, late Saturday night from the airport.  They had an excellent adventure in Utah, and other than some wicked sunburns on their faces (resulting in raccoon eyes from the protective ski goggles) they were in decent shape.  My son of course regaled me with stories of his dangerous escapades, involving things like jumps and cliffs, way more information than I want to know…  And yes, he wears a helmet when he skis, they both do.  Not that it’s going to help when you fall off a cliff…

My husband’s birthday was Sunday.  My daughter had wrapped all his gifts from my shopping expedition on Friday, she used recycled newspaper, it is cheap and goes right back in the recycle bin when the gifts are unwrapped, so my husband got to open his gifts, and then I headed down to Morristown to my Baroque recorder consort rehearsal.  I’ve always wanted to play in an ensemble of sorts, never got to as a child.  I attended a parochial school and we didn’t have things like middle school concert band.  I took piano lessons, but that isn’t the same as being part of a group.  No one person stands out, it is about being a team.  There is a lot to learn from that experience, and I’m glad I’m finally getting my chance.  The music is beautiful, we are playing French love songs from the 1600’s.

Sunday afternoon, I sat for two hours on a bench outside the A&P in the town where my daughter attends HS.  I sat with an inkle loom in my lap, weaving away on the Key Fobs for the Frances Irwin Guild donation for the MAFA conference tote bags.  My daughter stood with a can, asking each customer as they exited the supermarket, if they would please support the music programs at Boonton High School.

Now, I know there are a lot of people out there who completely disapprove of this practice.  They say it teaches kids to beg for money.  I actually don’t completely agree.  I have spent many, many hours sitting outside of supermarkets and grocery stores, even Walmart, with my kids, (an adult always has to be present), during their years in scouts and school clubs and programs.  I’ve watched my kids develop into  confident, well spoken almost adults, who have learned to look someone in the eye, and ask for what they want, and be gracious when a donation is made, and even more gracious when the answer is ‘no’.  My daughter has a speech issue, and it is hard for her to stand there for two hours repeating a phrase with lots of “s” sounds, and keep her diction clean and understandable.  Yet she did it.  She didn’t complain, she did her job, and she represented the school well.  All these seemingly minor events in a kid’s life all add up to make them who they become as adults.  There are lots of people out there, exciting from a supermarket somewhere in America who have fond memories of their years in band or chorus and many of them will strike up a conversation with my daughter, asking about what instrument she plays and how the money is being spent.  She can hold a conversation well with a perfect stranger, (which is why there is a parent always lurking in the background) and I’m proud of her confidence and poise.

Anyway, back to me, sitting in the background on the bench weaving on an inkle loom.  Some of the supermarket workers, who didn’t speak English, and were obviously from a country where weaving is an important part of the culture, seemed thrilled to stand and watch me weave, it was probably the first time they saw a woman sitting outside a marketplace weaving, since they left their countries.  There was an unspoken bond there that was pretty recognizable. 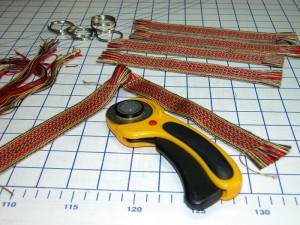 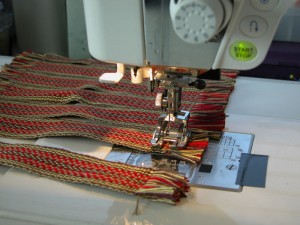 So I finished my Key Fobs, and this morning, I cut them off the loom stitched across the top and bottom of each band, and sewed them to the key rings.

The Mid-Atlantic Fiber Association is working hard updating their website to be useful to its members, and they now have a resource page, where you can find projects and techniques.  The directions for these key fobs will eventually make their way there, but you can find the directions for the conference project from two years ago, a tissue pack holder for your purse from handwoven fabric in the projects page. 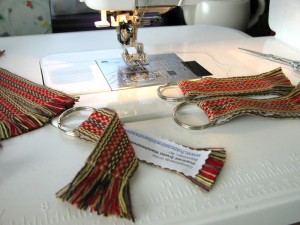 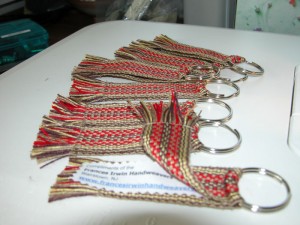 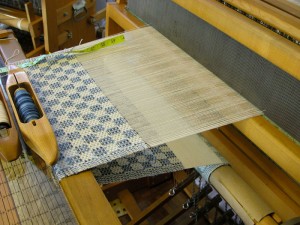 The rest of the weekend was spent trying to catch up on some things, and my daughter started weaving her first of eight placemats, she did a really good job for a new weaver, her edges were straight with no draw-in, but she did have a few difficulties with broken threads, the 10/2 warp is a bit finer than her first couple projects and she is a bit aggressive when throwing the shuttle.  She isn’t having any problem following an overshot sequence, as I suspected, and the great news is the friction brake seems to be holding and there is no slippage of the beam as she beats.

And my next big project to tackle, besides finally getting the lining and interfacing cut out for the Arctic Sky jacket, is redesigning my website.  I spent a lot of hours this weekend, working on a logo, and what I wanted the home page to look like.  I also decided I wanted a Spry drop-down menu under the header, and never having done one before, I spent a lot of nail biting, hair ripping moments trying to get it work.  And of course my lovely husband comes in so I could proudly display my accomplishment, getting this puppy to work properly, and formatted properly, and he takes one look at it and says, “You forgot a tab for the blog…”  So more hours were spent trying to figure out how to edit my now gorgeous drop-down menu to add a tab…   Dreamweaver for web design, is a powerful program and the learning curve is huge, and it isn’t very intuitive, but then again, I’m not hugely computer literate either…  Stay tuned.