I’ve talked to so many people who secretly admit to loving the simplicity of being at home and enjoying what little treasures life has to give.  It is no secret that though financially it is tough having all of my work cancelled, I’ve been able to make use of the time, creating new work, and developing digital product.  There are enough Zoom meetings a week, to keep me connected with knitting, weaving, and critique groups, and now a free artist lecture series at Peters Valley every Friday night, that I feel like I’m still part of a bigger whole.  I’ve had friends come and sit on the deck and play recorders, and we have enjoyed the gardens, the weather, and just the simplicity of being together.  I have not been out of the house except for a couple of runs to the post office, and the eye doctor and the dentist since March 15.  I’m not complaining…

I’ve always done my own photography, I sort of have a degree in it, I’m not a novice around a camera, and early on in my career, I invested in a set of used strobe lighting and decent equipment, which after all these years, I’m grateful is still going strong.  It has been on my “list” to do a photo shoot, long overdue, of all the work I’ve done recently, along with my daughter’s work, all of her knitted dragon shawls and cowls.  She has those photos, so I won’t include them here, but suffice it to say we worked from about 10 am until about midnight, and shot more than 600 photos between the two of us.  This is the first time using my office as the photo studio;  prior to that I always spent a couple hours cleaning out the front end of my weaving studio, and then a couple hours putting everything back.  You need a pretty sufficient amount of floor space to do an indoor photo shoot of garments using strobe lights. 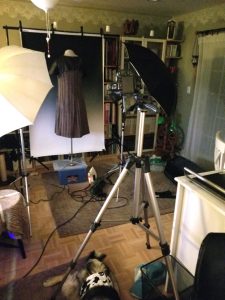 Of course the major issue we had was the four animals, three large dogs and a cat, who insisted they had to be exactly where we were working.  No matter how much we separated them, gave them marrow bones to chew, threw them outdoors, then kept coming back to be right under where we were working. (Yes, he is wearing a diaper.  I have two intact champion males who enjoy pissing contests in the house.  Belly bands made my life bearable again!) 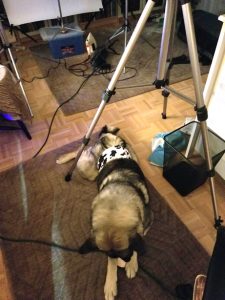 The shoot went really well.  I got everything photographed I had on the list, and so did my daughter.  It was a really long day.  But I felt really good about how well I used my time since I returned from Oregon in mid March and the entire world came crashing to a halt.  It was really great to document what I’ve done.  Of course at this point I’ve launched 7 patterns, and we are close to launching the swing coats.  If you are interested, my digital patterns are available here.

I did photograph the princess seam jacket and the swing dress, though they aren’t made from handwoven, formal photographs were needed for use in the pattern directions, and promotional materials.  Shooting stuff on me in the mirror isn’t the best advertisement for my patterns! 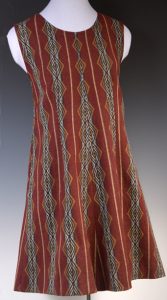 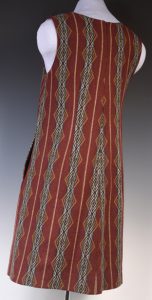 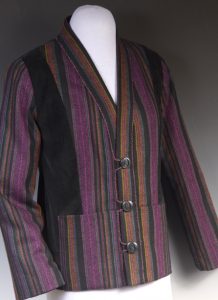 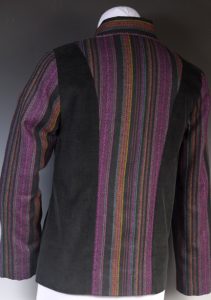 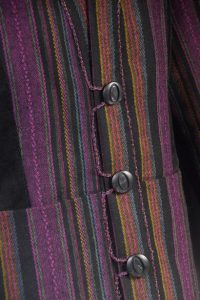 I also shot this vest, which I made last fall, for the guild sale.  It didn’t sell, and I made it in a much larger size than I am, and I love it so much in the photograph, that I’m tempted to take it apart and cut it down to fit.  The Pendleton Woolen Mill Worms are woven into a Theo Moorman inlay.  All of the details can be seen on my website, the link to the gallery is here. 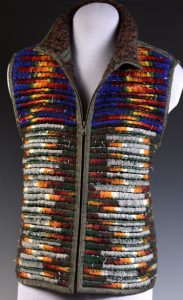 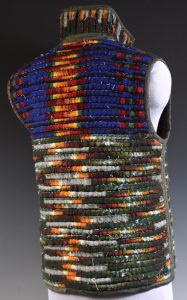 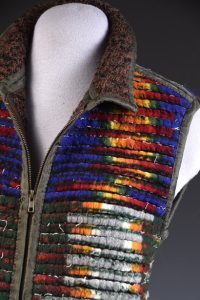 And so I was quite amazed at all the pieces I’ve done since I got back in March.  One of the first things I tackled was a remake of a vest I made a few years ago, from the fabric I made in a Dianne Totten Crimp Cloth Workshop.  I never liked the way it turned out, and it sat in the back of my closet for a couple of years.  I finally dug it out and re-draped it and cut a lot out of the sides…  Now I love it! 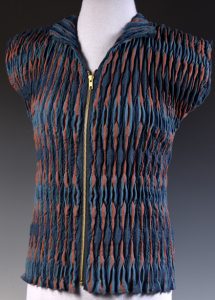 Then I worked on creating a swing skirt from my swing dress pattern.  The fabric was woven a year or so ago, called Vertical Barriers. 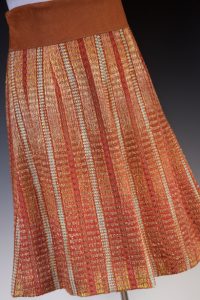 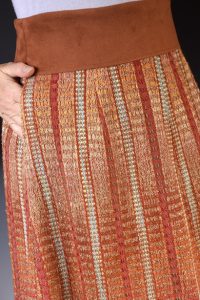 I followed that by working with the Driftwood fabric.  I created this dress with a semi attached leather yoke with sleeves.  And I couched an embroidered design on the yokes, both front and back, and added beads. 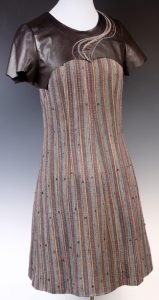 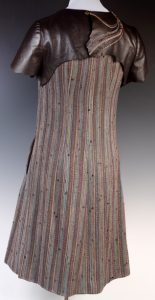 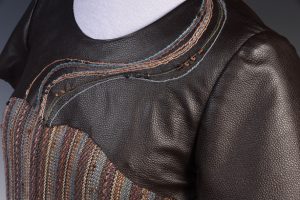 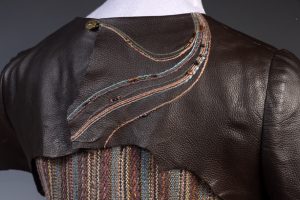 The leftover Driftwood fabric and leather, went into making this motorcycle vest.  Leather is pretty tough to photograph, there is no way around the glare of the lights.  Even using diffused lighting with umbrellas.  Leather shows everything.  But I’m pretty happy with the photos. 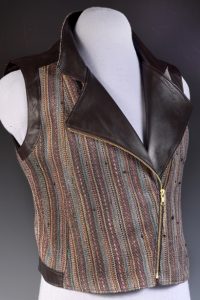 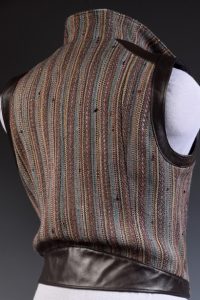 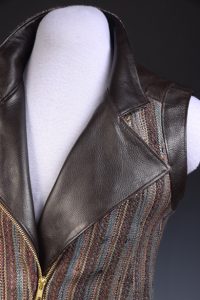 I went from there  to the swing coat from the handdyed wool/mohair yardage I wove at the end of last year.  This one was a challenge, it is a combination of my 400 swing coat, which should be released shortly, and the hood and in-seam buttonholes from my 700 – 1700 tunic.    One day I’ll write up a PDF of how I actually did this.  It is on the list.  The list is very long…  I need more quarantine time… 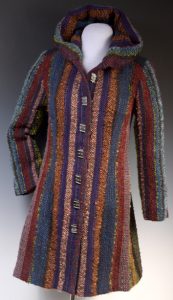 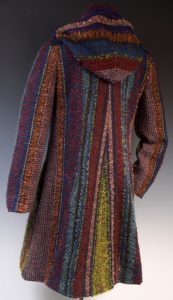 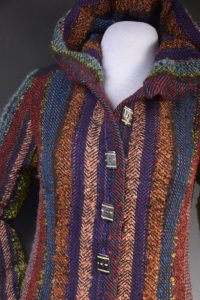 And then I dove into a loom that has been sitting idle for years.  It had about 30″ left of a Theo Moorman threading, poly sewing thread tie-down warps on a linen ground.  I played with novelty yarns and stripped recycled fur.  I had so much fun with this, I’m waiting to set up a loom specifically dedicated to this technique so I can play and create in a spontaneous way, which is so not what a weaver usually does…

The end result is this walking vest, it is a combination of my 600 walking vest pattern and the 800 zippered vest pattern with collar.  Both are on the table for creating digital downloads, but it may be another couple of months. 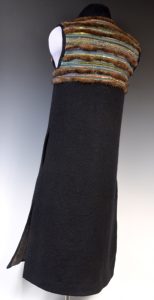 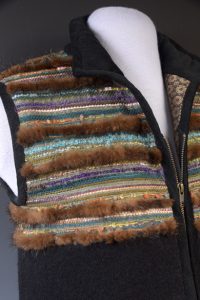 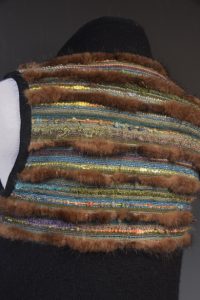 It is amazing to look back over how productive you’ve been when the world is falling apart.  I admit that it is sort of unusual to be so productive when everything looks so bleak.  My daughter just rolls her eyes at me.  I can assure you she is responding to all of this in a much different way.  I’ve always thrived when the chips are down, by losing myself in my work.  There is something about designing and executing something really difficult to take you away from current reality.  It has always worked for me, through my own bout with cancer, through my husband’s cancer and subsequent death, through the raising of two young adults, to my son’s military deployments in the middle east.  Keeping busy has always gotten me through.

And now come the tedious part, where I process the photos, update all of my social media, website, even the new patterns, because I have new images for the 1000 Swing Dress and the 200 Jacket with Princess Seam variation.

It is very satisfying to cross off a large project on the to-do list.  Now I can move onto the next major hurdle, but I know that the new photo space in the office is quick to set up so I won’t have to wait a couple years between shoots!