First, let me welcome all the ASG members who have just joined my blog,  following all of my creative escapades.  There has been a flurry of subscriptions for email notices for when I post a new blog, and many of them have signed on after my blog was mentioned in an ASG (American Sewing Guild) posting.  Thanks Marcia Russell from northern California for the mention.  Marcia has written for the ASG publication “Notions”.  For all of you out there who are new to my blog, you may be interested in a podcast I did for Weavecast, about a year and a half ago, though Weavecast is a podcast for handweavers, it crosses over into so many other fiber communities it is worth noting.  I was episode 26, “Sew Your Weaving“, and I approached the podcast, not as a weaver, but more as someone who has sewn for most of her life, and has a lot to share about the body and the spirit and the sewing machine.

After much angst, and frustration, we are finally finished!  A bit of background, for those who are new to my blog.  Exchanges are a fun part of weaving guilds, and they come in many different forms.  Last year, one of my weaving guilds, Jockey Hollow Weavers, which meets the first Wednesday night of the month in Mendham, NJ (Morris County) does an “Exchange” each year, starting it in September, and finishing up in June.  Last year, we did a crackle exchange, crackle is a weave structure, everyone did samples of a specific design in a Crackle structure, and at the end, participants had a notebook of all different designs.

My then 15 year old daughter had just joined the guild, and was anxious to participate.  No matter that she hadn’t really ever woven before, actually correct that, she hadn’t ever set up her own loom before.  There is a difference.  So, being 15, and not knowing how to plan ahead, leaving everything to the last minute, she learned how to wind a warp and set up an 8 shaft crackle the weekend before the exchange was due.  That was last June.  In all fairness, she pulled it off, wove the samples beautifully, and delivered them finished and mounted, and stood before the group explaining her draft and how this was her first warp all on her own.  Everyone, including her mother, was very proud.

Fast forward to September.  My 15 year old enthusiastically raised her hand when a poll was taken to find out who was interested in a  Placemat Exchange for the 2008-2009 guild year.  The theme was “Overshot”, all mats had to be woven in an overshot pattern.  Each participant gave the other participants 2 ounces of 5/2 perle cotton in their pattern color, and all of us chipped in and bought large quantities of 10/2 perle cotton in white for the background.  As it worked out, there were more than eight participants, but not enough for 16 (two groups of eight), so we invited a few members of an adjacent guild, and ended up with two groups of 8 each.  My daughter joined one of the groups, and I joined the other.  So my daughter, Brianna, started the set up, gently prodded by me, during her Winter break last December, and has muddled along, weaving when she could, hampered by school activities, broken warp beams, broken threads, and a major threading error, which she painstakingly took out and re-threaded because in weaving, there is nothing else to do but take it out and re-do it.

Bri and I selected the pattern “Dog Tracks” which was from an 18th century weave structure class I took with Barbara Miller in 2000 at Convergence Cincinnati.  I liked the name since Bri works on Saturdays at a local kennel and her clothing looks a lot like muddy dog tracks when she comes home at night.

So those that have been following my blog since 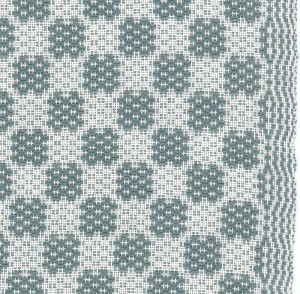 January, know I’ve posted a running score, and for the most part, we were steadily neck and neck, I’d weave a mat, and Bri would weave a mat, until Bri got so busy with a major school competitive event (that involved a lot of glitter) that she fell behind.  She was about 10″ from the end of the last placemat, and the warp beam broke again.  I was able to fix it, and Bri finally finished the last mat on Saturday morning, but discovered a mistake about 5 inches back and had to get to the High School for the final production of this all consuming event, so like the kind mother that I am, and wanting to get this bloody thing finished so I could weave all the samples that went along with the drafts for the placemats, I unwove the 5 inches, corrected the mistake,  and finished the mat.  I spent the day today, weaving about fifteen 5″ x 5″ samples, and printing all the drafts for the samples, which will go along with the mat.  The point of an exchange is to have lots of different patterns, having just the finished mats would never satisfy your average weaver, we have to know how it was done.  So there will be a notebook of all the patterns along with all the finished mats.  Each participant will have, if all goes well, 8 different overshot design placemats, all in their pattern color.  Bri chose purple, and I chose a lovely soft celadon green. 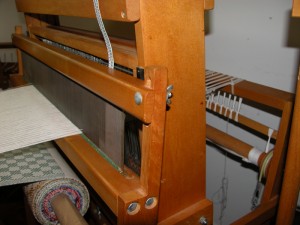 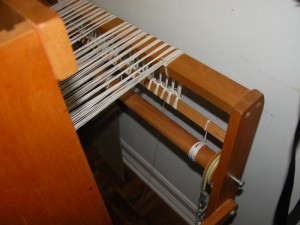 Every weaver loves to see the knots coming up over the back of the warp beam, this means you’re almost there.  After 12 yards of fine cotton warp, and almost six months of time and gentle prodding of a now 16 year old, this was a welcome sight.  There are two photographs here, the next swing of the beater after I shot the image on the left, the apron rod which holds the knots at the end of the warp, broke clean off the cords holding it to the loom.  The problems I’ve had with this poor loom….  So I turned the loom around, sat down on the floor, my favorite position with this loom, and changed the apron cords to Texsolv, which I’m really hoping will hold for awhile.  Most weavers know about Texsolv, and it is available on rolls through most weaving suppliers.  Not cheap, but it does the job from treadle tie cords to apron cords and heddles better than anything else on the market. 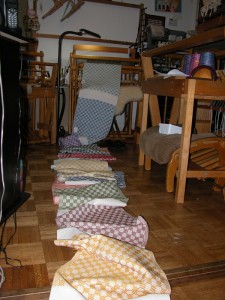 This is such a cool shot!  I am so excited.  Winding off six months of work to really step back and look at it gives me such satisfaction for a job well done.

I spent the next couple hours, stitching carefully between the mats and cutting 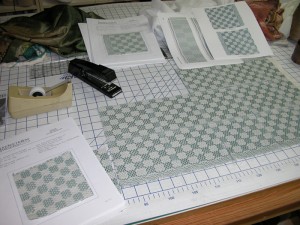 them apart, and doing all the paperwork and samples for the drafts (Photo right).   So now we have a huge stack of placemats ready to take to the meeting on Wednesday night.  The next two days will be a whirlwind of getting things done before my mini vacation.  Yep, I’m heading out west!

Continental has a promotion allowing me to fly for double Elite qualifying miles, a great bonus when you are trying to maintain Elite status.  So I decided to hop on a plane on Thursday and head to the other side of the country, specifically Seattle, just for a weekend, to hang with my special fiber buddy Robyn Spady.  We are planning a weekend of fiber adventures, wine, and friendship.  And I get bonus miles too!  Such a deal…