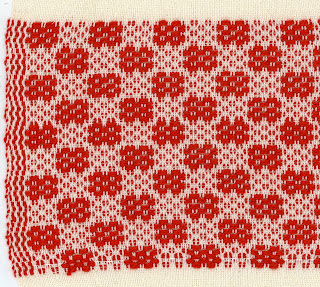 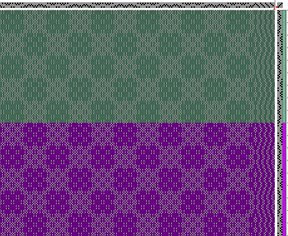 It is the last day of 2008. A quick note as I fly out the door to yet another holiday celebration. The fruit salad is made, the house tidy, the wood stove warm and inviting, the blustery wind howls and swirls the new six inches of snow, and for today, all is right with the world. At least here in my corner of NJ.
I spent the afternoon setting up the draft for an overshot placemat exchange that my daughter and I are doing with the Jockey Hollow Guild. 10/2 natural Perle Cotton warp, and a 5/2 Perle weft, my daughter and I are both participating, each one part of a group of eight. So we will be weaving a total of 16 placemats, I want to get her winding the 12 yard warp we need, so she can get the threading started while still on vacation. She is a new weaver, at 16, and as a member of Jockey Hollow, she participated in her first sample exchange last June. She did an 8 shaft huck sample, nothing like starting out with eight shafts for your first project! She did a great job, and at one point, looked up from behind the loom and said, “Mom, I’m really enjoying threading these heddle things, I’ve figured out the pattern and this is like a logic game.”

The placemats are overshot, I picked a simple overshot pattern, called Dog Tracks, I had done in a class of 18th Century structures I took at the Cincinnati Convergence in 2000. (see above sample in red). I liked it because it was simple, and because my daughter works on Saturdays at a dog kennel.

This was going to be her adventure, but as luck would have it, the placemat exchange had more volunteers than it needed and not enough for two groups of eight. So I agreed to be part of a second team, and thought I’d streamline the process by piggybacking onto my daughter’s warp. This is probably a huge mistake, but I didn’t want to tie-up two looms all spring.

So my daughter picked purple for her weft, and instructed me to pick something that would work with her purple, as she was confident that when I died, she would get my set of mats and then have 16 total. I love the way teenagers think… So I picked a celadon green, it sort of goes with my dishes, but I know my daughter will want to put them away for her future.
Oddly enough, I’ve never woven a dish towel. I do yardage, I’ve always done yardage, and I’m not so much into functional textiles. At least ones that I weave. She is on her way, and I have a suspicion that she will weave her first dish towel long before I do…

[…] ago with Barbara Miller on 18th Century Structures.  It is a four shaft overshot pattern called Dog Tracks.  My daughter and I are both participating in this exchange, each of the 16 participants picks a […]

[…] old enthusiastically raised her hand when a poll was taken to find out who was interested in a  Placemat Exchange for the 2008-2009 guild year.  The theme was “Overshot”, all mats had to be woven in […]

Tuesday, December 30, 2008 The end of the year holiday season is a mixture of endless social opportunities, fabulous food,...