I could not get focused today.  Maybe it was because I got up at 3am to drive my husband and son to the airport.  They are taking advantage of some frequent flyer miles, my son’s spring break, and some new snow in Utah, and off they flew to Salt Lake City for the week to enjoy some guy time on the mountain.  🙂

I did go back to bed once I returned from the airport, and I did manage another four hours of sleep, but the day felt very disjointed.  So I puttered.  I did a little of this, a little of that.  After all, it is Sunday, and most normal people get off a day or two a week.  That would be a foreign word for me.  I did some grocery shopping, cleaned my bathroom, started cleaning the kitchen, the dirt doesn’t stop coming just because I left for a week for a conference.  I tackled a pile of files, deciding that my son’s progress reports and school files from elementary and middle school, now that he is in college, didn’t need to be taking up space in my file cabinet any longer.  They’ve been on my floor for awhile.  So that pile is gone. 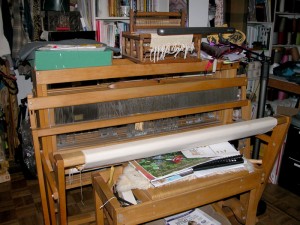 This is what happens when a loom is left unused for a period of time.  Piles start to cover it.  It looks lost amid the debris.  I had a major guilt attack today over my poor naked looms.  I’m in the middle of too many other projects to even think about getting a warp on this puppy, my beloved first loom, a 45″ 8 shaft double sectional back beam Tools of the Trade, I bought in 1978, right out of college.  I love this loom, I will never part with it.  I have woven thousands of yards of fabric on it.  But at the moment, it is looking like a neglected child. 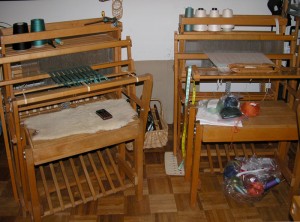 This pair of looms sits beside the big loom.  I never named my looms, not sure why. It was hard enough to name my kids.  So this pair, both from Tools of the Trade as well, bought in the 1980’s at different times, helps me out when my big loom is busy.  The one on the right, 25″ wide, is four shaft, and it is warped with 10/2 cotton for my daughter’s and my placemat exchange we are doing with the Jockey Hollow Guild.  More about that later.

The one on the left, is pretty well equipped, for a 25″ wide loom, it has eight shafts, double sectional back beams, and is a little work horse.  I wove the Arctic Sky fabric on that loom.  It currently has the remaining yard or so of tencel warp from a Bonnie Inouye class I took last October (oh how embarrassing).  It had my only 25″ 12 dent reed in it, which I needed for the placemat exchange loom on the right, so I stole it.  Just pulled the warp out of the reed and moved it over.  So I couldn’t have woven the rest of the warp if I had wanted to. 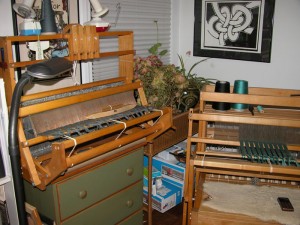 To the left of that loom, I have a 25″ Tools of the Trade table loom, also four shaft, that I keep warped with a Theo Moorman 10/2 cotton structure, for my art pieces.  I just finished the Big Sister piece, and I had originally needed the 12 dent reed for that one, but settled on a 6 dent reed, though I wasn’t completely happy with the reed marks it left.

So I was pretty embarrassed that nothing was happening on any of my four looms, one without a reed, one with the wrong reed, one with a warp and nothing started, and one with no warp at all.

So I looked through my vast stash of reeds, and found an extra 12 dent reed I had purchased used many years ago, for my 45″ loom, and I had my daughter hacksaw the thing into two pieces.  I decided that I needed to spend the day paying some attention to my poor neglected looms, and I resleyed the tencel warp into the replacement reed, and I switched out the reed on the table loom, tied both warps on the front beams, and they are ready to weave. 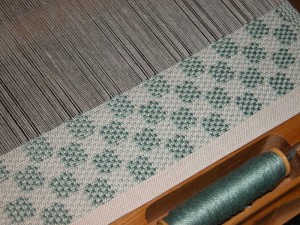 I turned my attention to the placemat exchange, and spent some time getting the structure to work right.  I took it from a workshop I took many years ago with Barbara Miller on 18th Century Structures.  It is a four shaft overshot pattern called Dog Tracks.  My daughter and I are both participating in this exchange, each of the 16 participants picks a 5/2 cotton weft color, and winds off a couple ounces and passes a ball off to each of the other 7 participants in their group.  My daughter and I are in two different groups.  So we will each have eight different overshot placemats at the end, all in our selected color.  I chose a grayed green, and I started the whole thing with mine.  Once I reworked the treadling, to give me the placement of the blocks I wanted, it started to weave quite well. 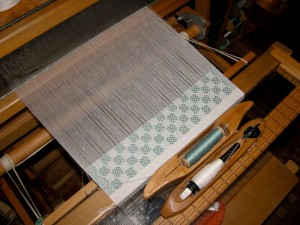 I detest two shuttle weaves.  I know, I know…  But I am use to weaving yardage, lots of yardage, I like my shuttles to fly, and two shuttle weaves just don’t produce the speed of a one shuttle structure.  Part of the problem here is the size of the loom.  There isn’t room for the two shuttles to fit on the web, when I beat, they bounce right off the loom into my lap and onto the floor.  I solved this problem on another warp I did, by taking the unused second back beam from the eight shaft (remember two warp beams require a second back beam), and clipping it onto the front of the loom, with a heavy plastic ruler clipped to the surface so I have an extra ledge to support the shuttles while I’m weaving.

I did manage to get to Morristown today, to practice with my recorder group.  I probably didn’t mention that I play Baroque recorder, I play alto with this group, and we got all new music today, something new to practice, a whole play list of French love songs from the 1600’s.    And I did manage to get down to my neighbor’s house for our Sunday night ritual, a gathering of the women to watch Desperate Housewives.  We hoot and howl all the way through it, and will be really sorry when the season ends, it is a long way until September….

It turned out to be a productive day after all, and the looms (all except my big one) look so much more happy.  I think tomorrow I will clean off the big loom so it doesn’t feel so burdened with my junk…

[…] for my blog entries, I believe there were two missed entries,  A More Focused Monday and Cast of Characters were published earlier this […]

Hi Daryl, I am sure you would have no reason to remember me I was in other work shops when you taught your vest workshop at Bucknell U in Lewisburg PA. I enjoyed talking to you at lunches and always think I’d like to take a work shop with you because you are full of info and are an up beat friendly gal. I found you while I was searching for info on a Tools of the trade looms because a student of mine purchased one. It was well cared for and was a good buy. I was glad she… Read more »

Was wondering if you know where I could find instruction manual for a 4 harness, 54″, Tool of the Trade floor loom.

A great diversion inspired by the program at today's American Sewing Guild neighborhood meeting. Watch me turn my favorite sweatshirt...