I am making progress, or else I’m completely delusional…  It is hard to stay focused, but maybe that’s not a bad thing.  Having severe ADD can come in handy when you are trying to take care of 20 tasks at once.  They eventually all get completed, and sometimes all at the same time, and that’s cause for celebration. 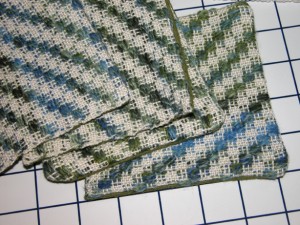 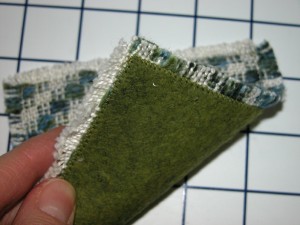 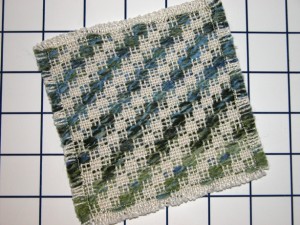 I took a little detour, because I had these little things sitting on my sewing machine, and they were just calling to me saying, “Fix me, fix me…”  So of course, I got knocked off course temporarily.  I blogged about my guild mug mat exchange last December (you have to scroll way down to find that part of the blog to see my mug mats).  I never showed the mats that I got.  Let me say that I love the fabric, and the colors, and the pattern of the mug mats I received at the exchange.  And I love the gorgeous wool backing my guild mate used to make the mats.  What I didn’t like, I’ll be honest, was the way they were constructed.  It was a sewing thing.  And I’m a sewer.  And I own a pair of shears and I’m not afraid to take something apart when I don’t like how it is constructed…  🙂

So I spent about an hour, I had already taken the six mats apart, and trimmed them and fringed them, and added a piece of interfacing to the back.  I re-pinned the wool, and did a fine zig zag around the perimeter of each mat.  Now they lay flat, and don’t have the lumpy uneven corners that could cause a wine glass to tip…  🙂

I’ve been working steadily on updating all the of the presentations/lectures/workshops I’m going to be giving on my southwest tour in February.  Since I’ve started the blog, I’ve spent hours documenting all of my projects, step by step photos, working out new techniques, and generally having a good time of it all, but I realized looking back over some of my lectures/workshops/monographs, that they could use a bit of updating, with some of the newer techniques/photos/projects.  The Leftovers Monograph needed a major overhaul, with all the new totes I did earlier on in the year.  I have much better step by step photos now, many of the ones I originally used were scanned from slides from storyboard techniques I used for demo purposes.  I finished reworking all the lecture/workshops for the trip, just proofing them now, but while I was working on updating the step by step PowerPoint slides, I had one of those slap yourself upside the head and yell, “Duh…” moments.  I had made a couple of placemats from leftover scraps, and developed a half day workshop out of it, I’ll be giving it this summer at the American Sewing Guild Conference in Atlanta in August, but I never resolved the edge binding.  I tried binding them a couple of different ways, and both attempts were too time consuming and clumsy for a four hour class.  Speed and ease in a class like this is so critical.  Just because I can do it, doesn’t mean a class of 25 students, sharing machines, in four hours, of mixed skill levels can do it. 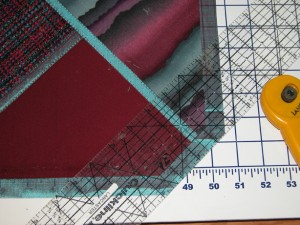 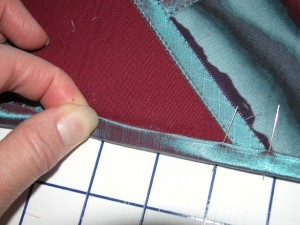 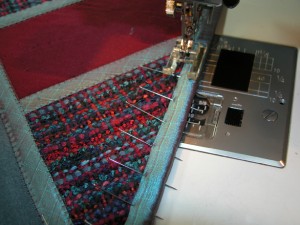 Well, suddenly it hit me.  So simple.  No need for a separate bias binding here.  Just cut the lining for the mat bigger, and fold around the front and stitch.  It worked.  So easy.  I undid all the binding on both of the mats, and tried out this method, I was so excited, and loved the finish.  I gave the mats a final pressing and…

This would not be a good time to mention that I failed to follow the most basic of all sewing rules.  That would be preshrinking the fabric.  I of course would never take such a short cut as to not preshrink the lining used as the backing for my lovely mats.  So I don’t need to mention here what happens when you iron something that hasn’t been pre-shrunk.  Lets just say I wanted to kill another couple of hours and remove all the stitching again so I could prove how important it is to pre-shrink fabrics before you make stuff.  🙂 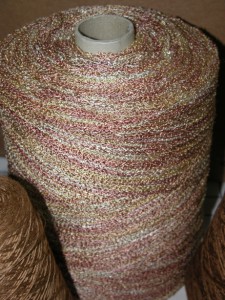 In the middle of that escapade, I got one of Webs emails, you know the one with all the cool knitting yarns on sale.  Since I don’t as a rule buy knitting yarns, I’m not so inclined to check it out, but I lie…  If you search, there is always something in the weaving yarn mill end clearance that just has to come live with me, and I always groan audibly whenever the Webs sale ad comes into my inbox.  I can’t not check…  And of course Webs is too quick to ship… 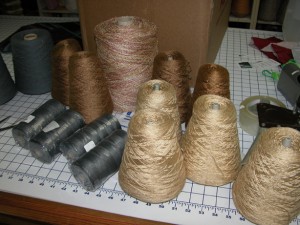 So I got a little additional diversion, a back order I forgot I had from Halcyon, and my cheap yarn from Webs both arrived the same day, I unpacked everything and was sort of surprised at this huge cone of rayon bouclé in a lovely soft variegated color.  I thought I had ordered something else, but this is pretty cool, and I think the whole two pound plus cone was something like $15.  Works for me…

And finally, I finished a piece I’ve had on the loom since last fall.  This is one of my Personal Post Series artworks, small woven images in a Theo Moorman inlay technique, I’ve blogged about this technique numerous times, just do a search for “Big Sister” and there are all kinds of how to’s out there in my archives.  I was doing a pair of images, that I wanted to somehow use to create a diptych, images that play off of each other, bound in a way to make them book like, which I have done, but I don’t want to show the final images just yet.  I am hoping to enter this piece in the Small Expressions exhibit for HGA, but there is a query going around the blog-o-sphere about the definition of “published work”.

HGA (that would be the Handweavers Guild of America), who sponsors Convergence which will be in Albuquerque this July, is sponsoring four exhibits, one of which is the yardage exhibit I just applied to with work from my last blog.  The requirements are that the work cannot have been published.  Two years ago when I asked for more specific information about this subject, I was told that website content didn’t count, that they were mostly concerned with magazine publishing, or books/catalogs with the work, that would have a national 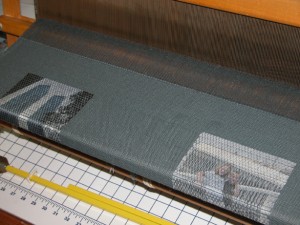 exposure before being exhibited at a Convergence.  I understand that policy, and respect it.  The piece I had done for the fashion show, earlier in the year, I stupidly let Threads publish, and now I can’t enter it in Convergence, because of this policy.  No matter, I have other work to enter.  But the question has come up, do blogs count as publishing?  I hadn’t given that much thought, because website content was safe and I think of my blog as an extension of my website.  But blogs are a form of publishing.  So I have a query out to HGA, and hopefully will get a response in a timely fashion because the next three deadlines are lurking around the corner…  Meanwhile, here is the piece just before I cut it off the loom.

Eventually I’ll show the finished piece and the story behind it.  I think it is a pretty powerful piece, because it is about something important to me.  And that is what art is.  A form of communication.  Whether it gets accepted to the exhibition is a whole separate issue, and that will be what it is.  But for now, I am proud of this piece, and will eventually show it to you when I find out if blogging is actually publishing.

Yes, Daryl, I do believe that blogs are publishing, and I am so grateful for all that you publish in your blog! It enables me to see, appreciate, and learn a lot from you. I would never be able to make it to Albuquerque to see the Convergence exhibition… and maybe that is the reason why HGA doesn’t want things which have previously been published — perhaps their drawing card is to be able to offer things that people can’t see somewhere else. But really, I’m of the opinion that those times are past. Information via internet about projects as… Read more »

I specifically asked HGA whether blogs counted (because I’m blogging my wedding-dress project), and they said “no”. So I wouldn’t worry about it.

So, maybe a thorough response to an ADD offering can’t be complete! But your re-working the rug mats is a DELIGHTful sewing teaching piece to me, and thanks for all the other parts too – ALL useful, even if out of my response time for today.THANKS!

The sacrifices you make for us! Thanks for the preshrink reminder. I’m remembering a piece that looked like Shrek because I didn’t.

Just a roll of the Dice…