Even in Camelot they had to pay the bills.  I have all my bills due around the same time of the month, so I only have to deal with paperwork for the most part, once a month.  I have a large “inbox”, on my desk, and any mail I have to deal with goes in there, and the last day of the month, or thereabouts, I sit down, and go through the stack, tossing junk, filing what needs to be filed, sticking things in a folder that need to be dealt with, but not today, (and here is where I put the deadline on my to do list, so I don’t forget about them), and sort out the bills by which account pays for them.  Though I work every day, I haven’t had a paying job since the late fall, so my pile of stuff to pay for the business was small.  I didn’t spend anything.  But the Christmas bills were all there, and I had to clear the 2008 files out of the file drawer and make way for the 2009 files, so it was a morning where I was, tea mug in hand, spa music playing in the background, in the zen zone of paperwork.

I have most of the accounts online, where I can do my bookkeeping once a month for my business, and I noticed that my business charge had some odd things happening, so I called my charge company and experienced the frustration of first, not being able to get a live person, and endless loop of automotive technology, and no way out, stuck on a ride with no end, pushing “0” on the keypad, only to be told by an electronic voice that that entry was invalid.  Finally in frustration, I screamed into the phone, “HELP”, and do you know, I was immediately transferred to a person.  Go figure.  No matter that the person was in India.  After giving him all my particulars, I was put on hold for 15 minutes and then got an English speaking person in some other continent, I traveled the world and didn’t leave my desk.  Turns out, they decided that my card might have been compromised and without telling me, they transferred all my purchases in the last week to a new number, but I don’t know the number.  (It was probably the sari’s my husband purchased in India that did it…)  So I’ll have to wait until my new cards come in the mail, and then call all the people who have the card on file.  I got a lot of eye exercises in for all those crow’s feet I’m developing, with all the eye rolling I was doing.

So that was my day.  Not creative, but a necessary part of running a business and a household.  I paid all the bills, and cleaned off my desk, took care of a number of conference emails, and then left to take my daughter to Volleyball practice.

First let me say that I have two nearly grown children.  I took them when they were in pre-school to all the town sports, soccer, t-ball, and I was NOT a good sports mom.  I didn’t have the right chair, scream out the right encouragements, I always winced when my kids were up for their turn.  I didn’t have star athletes, I didn’t even have average athletes.  My daughter lasted one season of soccer, she largely sat and played in the sand when the ball wasn’t near her.  My son wasn’t very coordinated back then, part of his ADD, he has made up for it now, he is a fantastic freestyle skier and snowboarder, but I didn’t know that back then, and I would largely hide in the back of the stands, bringing my inkle loom, or kumihimo on a plate (I actually brought a floor marudai once and sat cross legged on the side of the field.  I didn’t do that again.)  The other mom’s sort of tolerated me, and would be kind enough to tell me when I should look up because my kid was about to do something that I might want to observe.

Fortunately my kids took to music and the arts with much more skill and creativity, I never missed a concert or show, unless I was traveling, and would cheer them on with the best of them.  My son plays a fabulous jazz flute, Ian Anderson is his Idol, and my daughter plays the trombone.  So it is rather ironic that my daughter has developed a passion for Volleyball.  It is a sport that I understand, starts when a child is older, and I found a local club in a nearby town for her to play a couple times a week.  There is no Volleyball offered in her High School, so this is her only opportunity.  She is a pretty powerful hitter, and is beginning to develop control over her body and mind, working them in sync. So here I sit, two nights a week, three this week with the snow make up practice, for a couple hours, the club is too far away for me to drop her off, go home, and then try to head west again to pick her up in rush hour traffic. 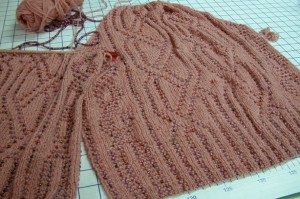 About four years ago, my son took an interest in Fencing.  I found a local adult school that allowed teens that had a fencing class, and he did this for a couple years.  Watching your kid fence isn’t as bad as watching them play T-ball, and for the most part, you only had to look up when they were actually in a bout.  So I picked up some knitting, a pattern I found in Piecework Magazine, the Jan/Feb 2005 issue, for a tank top with beaded Trompe L’oeil Cables.  It was very cool in the photo, designed by Lily Chin, from her book, Knit and Crochet with Beads, published by Interweave Press in 2004.  I dug around my studio for some yarn, found a shrimp colored acrylic/wool, and found a whole pile of beads that would work, though I didn’t have enough of any one color, so I just tossed them all together and began to pre-string them onto each skein.  This took quite a few fencing classes, and then I could start knitting.  I actually finished the back of the tank top.  Then my son quit fencing.  So the tank top sat in the tote bag, as a UFO for four years.

Back to Volleyball.  I dug the UFO out when my daughter started this season of Volleyball, and I’m determined to finish it so I can wear it this spring.  I’m half way up the front now, and my gauge is a little off from four years ago, but no matter, I am determined to move forward.  The beads are pretty, and I like following the grid for their placement.  And I look up every once in awhile to see what my daughter is doing, and then quickly get back to work.  I am a very bad sports mom, but at least I am there, and I am encouraging, and I am determined to get a sweater out of this.

WOW! Again. Never even knew you were knitting again. I’m also toying with the idea of
starting a sweater. You saw the packaged one when you were here for lunch in Dec.
Onward and upward! Did start a new quilt. Very southwestern in colors. Think you saw the one I’ve finally completed. Ready for mailing to the Quilters.
Love you, Mom

[…] rehearsal, and get her to her snow make up volleyball practice, (where I’ll continue on my knitting), and then on to trombone […]

And Even More Photos!

This coat/dress ensemble was made in 2007, and exhibited in the Tampa Convergence Fashion Show.   It is a colorful piece,...