A good weaving buddy of mine recently contributed to a series of interesting comments on my  Facebook page after I wrote on my Wall the following query:

Daryl: Do two days off equal a vacation?

Ginnie: Does it feel like it? What’s a vacation?

Daryl: I don’t know exactly, but I see some people talking about them on Facebook.

Ginnie: Maybe you and I need to research this!

Daryl: Sounds like a plan, I’ll add “research the definition of a vacation” to my to-do list.

Daryl again: Actually, I just heard that when you have off on a Saturday and Sunday, that some people call that a “Weekend”. I’ve never experienced something like that, so I can’t verify.

Ginnie: Ah, I have heard of “weekends”, said to be invented by labor and teacher unions…. There’s a banner in our town to that effect!

Daryl: I don’t think there is any such thing as a labor union for the self employed artist. That’s probably why I am not familiar with the term “weekend” or “vacation”. Might be something else to research, it was great to have two days NOT in my studio.

Truth is, I had two glorious days last Saturday and Sunday, where no one expected anything from me, and there was nothing on the calendar for me to worry about or deal with, or get in a car or on a plane for, and I sort of didn’t quite know what to do with myself.  A gift.  There is nothing more to be said.

So I spent the last three days, gearing back up for the next event, a conference in Northern California, CNCH 2010, I leave April 8th.  I cranked up the trusty HP printer, and printed no less than 4000 pages of handouts and monographs, bound everything, packed two large Priority Flat Rate Boxes, and shipped them off to California this afternoon.  Huge exhale, that job is complete.  I paid all my bills, and now have to tackle a pile of documents due tomorrow.

On a completely different note, in a recent string of emails, about the tie up on a Tools of the Trade Loom, of which I own four, see blog post from last year, I ended up solving the problem and then deciding to purchase the loom from the person who posted the original email.  This is a sister loom to my TOTT floor looms, I own two 25″ and one 45″ floor loom and regret never having purchased the 36″ version.  I have found that, although I don’t have space for another loom there have been times where I wished I had a second bigger loom.  It would of course have to have 8 shafts, and big bonus, it has two back beams.  I wish one was a sectional, but I can deal with that.  So I will head to Maryland in April, to pick up my newest addition, and then figure out where the hell heck I’m going to put this puppy.

A Tale of Two dish towels…

I don’t weave dish towels.  I have been weaving since 1974 and I have never actually woven a dishtowel.  Is that some sort of record?  I did weave place mats, runners, scarves, throws, all kinds of products on my loom when I was in production in the 1980’s, selling my little heart out on the weekends in craft fairs, I may have mentioned that, but I never wove much less sold a dishtowel.  I don’t know exactly why that is.  It isn’t like I don’t use dishtowels.  I go through them like water, use them until they fall apart, and buy new ones at the grocery store and use them until they fall apart.  I can’t say I’m one of those who go by the motto, “It’s too good to actually use”, for goodness sake, I chop up my handwoven fabric, and make garments and wear them until I’m tired of them, they wear out, or they go out of style and then I cut them into something else.

For some odd reason, I’ve never made a dish towel.  But in the last couple of months, I’ve actually acquired two.  The first one came from Laura Fry (hey, if you are going to have someone else’s handwoven dishtowel in your house, you might as well have one from the best!).  Laura was offering an incentive on her blog, after the disastrous earthquake in Haiti, a dishtowel, to anyone donating to Doctors Without Borders.  I had planned on doing that anyway, I donate on a monthly basis now, just like I do for public radio, but I took her up on her offer and she sent me a lovely aqua cotton dish towel.  I didn’t use it, just looked at it.  OK, to be fair, we have a dog.  And this has been the rainiest March in the history of the state of NJ (and for those whose US history is a bit cloudy, we were one of the original 13 colonies.  George Washington slept in almost every town in the state in the late 1700’s or so they say…) Which means that our lovely back yard is a swamp.  Swamp + dog = muddy paws.  Dog comes in, nearest textile gets grabbed, and by the back door off the kitchen, it is usually the dishtowel.  So I haven’t actually wanted to put my lovely Laura Fry dishtowel out because it would be covered in mud within about 10 minutes. 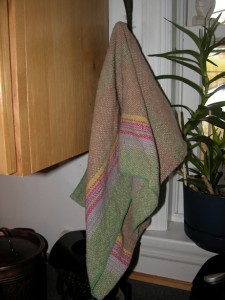 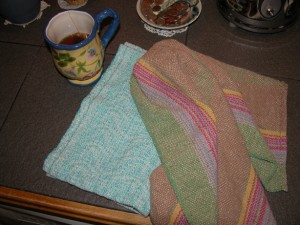 On the drive back to the airport after my recent trip to Columbia, MO, Debbie Schluckebier, my lovely workshop coordinator and airport chauffeur, presented me with a thank you gift from the Columbia Weavers and Spinners, one of her beautiful handwoven dishtowels.  The universe was trying to tell me something.  That and the three hour trip to the Kansas City airport allowed Debbie to convince me that it was silly to have handwoven dishtowels and not love them and use them.  So I’m using them.  Both of them.  No one has died, and none have been covered with mud yet, and they are really pretty and I feel good when I use them.  I am getting dangerously close to actually wanting to warp up one of my numerous looms, all of which are naked at the moment I’m embarrassed to say, with some cotton warp, and weave some actual dishtowels.  They don’t have to be prize winning, and they don’t have to color matched to my kitchen.  And I don’t have to turn them into clothing.  I can just use them in the kitchen, and be happy, and if they get used on muddy dog paws, there is always the washing machine…  I hear they won’t disintegrate in the washer and dryer…