Wow, what an amazing weekend, on many counts.  First, let me just explain my family dynamics.  In a nut shell, I am the eldest of three sisters.  We are from youngest to eldest only 5 years apart.  My mom is still living, and owns a house at the Jersey shore.  She remarried a couple of years ago, to her high school sweetheart, after meeting up at a 60th High School reunion!  She lives in Maryland now with her new husband, a delightful man, who calls himself our “bonus dad”.

To celebrate my middle sister’s 50th birthday a couple years ago, the three of us took a trip to San Francisco together where we had the most wonderful 5 days.  We vowed to do it again, and after trying unsuccessfully to get to Charleston, SC this spring (work schedules, surgeries, dramas, families), we settled on meeting up at our mother’s home at the Jersey Shore.

Coincidentally, my mom has decided to sell the shore house, I gotta agree that maintaining two three bedroom ranch homes when you are pushing 80 is really tough.  So the day before we all arrived, that would be last Thursday, my mom signed the contract listing the house.  So it was with a bittersweet acknowledgement that this was the end of another era in our lives, that we arrived at the house on Friday.  My mom and bonus dad were there to greet us, and we all settled in for a lovely visit. 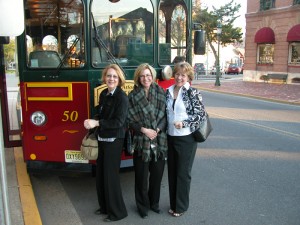 My sisters and I spent some time in Cape May (exit zero for those who only know the geography of NJ by the parkway exit number), touring gardens, architecture, and even an evening ghost trolley tour (apparently there are a number of sites in Cape May which are quite haunted!), not unlike our trip to San Francisco where there are numerous old Victorian Mansions remaining, with amazing architecture and gorgeous gardens.  (My middle sister you may remember is an architect with a fantastic knowledge of historic preservation, and my youngest sister is the CEO of a southern NJ rehabilitation hospital by day, and an award winning  floral designer and exquisite gardener during the weekends.) So traveling around with these two is just too much fun!  And both have opinions they aren’t afraid to share.  I of course handle all the textiles we come across, and the fashion.  As you can imagine, we laugh a lot! ( My youngest sister is in the middle and will be mortified to know I used the picture with her draped in my Pendleton Wool blanket she stole from my car because we were seriously underdressed, it was sooooooo cold!)

So, while we were having quality sister time, my mom was starting to de-acquisition her belongings, though I swore I wasn’t bringing anything home to my already too cluttered home, I was unprepared for the amount of my VERY early work she had in storage in this home.  This isn’t the home I grew up in, and not even the only shore home they owned.  She’s only been in this house about 10 years, so I didn’t think there was that much accumulated.  Silly me… 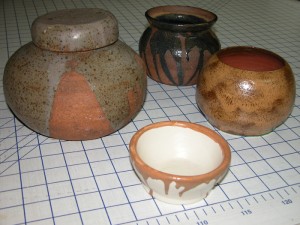 First there were the pots.  OK, I know these look like pots from  ceramics class 101.  Especially the little white one in front.  In fact, the little white one in front was one I threw in 1970, at 15, in a high school craft class.  I can NOT believe she still had it on the shelf!  The other three I did in college.  The one in the back, with the black glaze dripping from it had a lid which had broken, but she still kept the rest of it.  God bless my mother…   So now I have to figure out what to do with this motley collection of bad pots…. 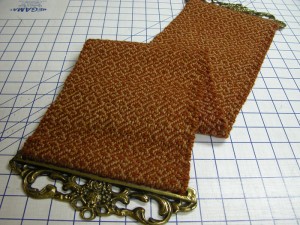 Then there was the bell-pull.  I’m thinking I did this little “hanging” sometime around 1979.  It was before I started craft fairs, but after I bought my “Tools of the Trade” Loom, it is made out of the most awful rug wool, because that’s what I had access to, the edges are very odd, I’m sure I never heard of a floating selvedge, but there it was, on the wall, and now it is in my collection of archived work.  I’ll bring it to my next guild meeting for a good laugh.  Honestly, it is great to see really early work like this, for it lets me know how far I’ve come.  I remember being quite proud of it when I had finished it and presented it to my mom… 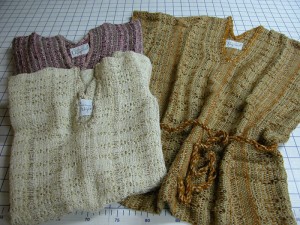 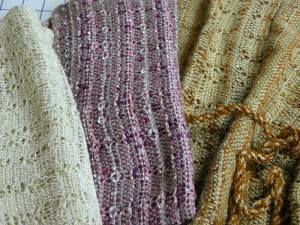 Then there was the collection of doup leno tops.  These represented the first “clothing” I sold when I started doing craft fairs around 1980.  They had evolved from a shawl I had made from curtain panels I had done, and someone suggested I cut a hole in the center and make a garment out of it.

So that began my career of selling handwoven clothing for 10 years, in craft fairs all over the north east.  What I didn’t remember, is how many my mom bought in those early years.  The weave structure was quite complex for my relative inexperience on the loom.  This was a six or seven shaft, doup leno, where false heddles are placed on the second harness and passed through the eyes of the heddles on the first harness.  If I have a chance, I’ll do a blog someday on this technique, but those of you who have a good weaving library or are members of a guild with a good library, look for the Shuttle Craft Guild Monograph #32.  It is on Doup Leno.  It was published in 1980, so when I started 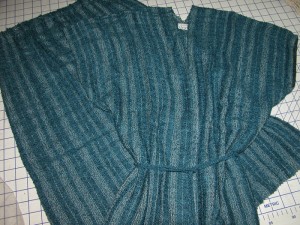 doing this technique around 1981-2, it was the latest thing!  I used that technique a lot in the beginning years of my craft fair life.  My mom also had this set on the left, which I think I made custom for her, I don’t remember ever selling this piece in my booth.  I did scarves like this, and I have a vague recollection of her asking me to make a whole outfit like it.  The warp was a spaced 20/2 rayon, 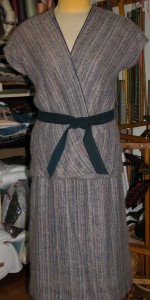 and the weft a very rick-racky rayon decorative yarn which I have a vague recollection of being from Scott’s Woolen Mill.  I found the scarf that matches it in my mother in laws belongings after she died.  My old work is finding its way back home.

Also uncovered in my mom’s stash of my early work, was this mohair bias vest and skirt.  The warp was something like 24 different yarns from my stash, and the weft was a beige mohair, which I brushed on the loom.  This little vest is all trimmed in Ultrasuede.  I know I sold a few tops and vests like this in my booth, but had no idea my mom had bought one, and kept it all these years. 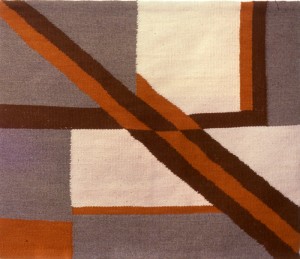 The best find though, was a tapestry I had done for my dad when I graduated from art school in 1977.  My dad was the credit manager for Scott Paper Company in Philadelphia, and his office was done in the popular decorating scheme at the time, orange and grey.  He asked me to do a tapestry for his office wall.  I remember being really scared at the time, this was my first real commission (he wasn’t of course going to pay me, he just finished paying me for my bachelor’s degree) but never-the-less, I was feeling a bit over my head.  But I did it, and I think my dad liked it, and it hung in his office until he retired many years later, and then it moved to the various homes they owned after they sold the house I grew up in.  The tapestry is around four feet across, and it isn’t bad technically. I wince a little now, but I was young, and inexperienced, and destined to make a career in clothing, not in tapestries.   Thank goodness!