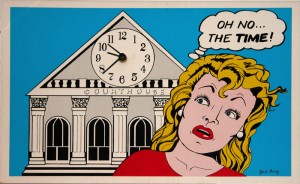 You know that feeling, the one where your wheels are spinning and you aren’t moving forward? My wheels have been spinning so fast for the last few weeks, and I feel like I am not getting anywhere, I’m making mistakes, I’m struggling to keep my head above water, and I look at the clock and declare, “Oh no, the time”!

We are busy here, wrapping up the summer, getting the kids back to school, but there is so much else going on I’ll be blogging around the clock for a week! 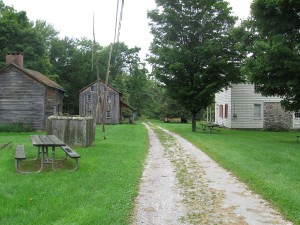 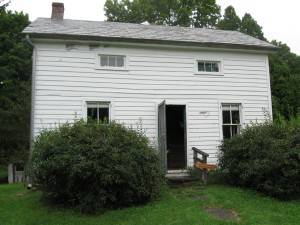 Last weekend, my daughter Brianna (16) and I did our yearly volunteer stint at Millbrook Village, near the Delaware River in Western NJ.  It is an 1850’s farming village, that has been kept alive by the National Park service, and has a wonderful weaving and spinning house, Hill House, kept alive by an industrious group of volunteers supported by the Frances Irwin Handweavers and the Jockey Hollow Handweavers,  organized by Sally Orgren.

We dressed up in costume and showed off the myriad looms and spinning equipment in the house.  My daughter elected not to wear the dress she wore last year, one because she hates dresses, and two because she decided that she needed a cap to cover her blue hair (yes, I know it was fuchsia, but now it is blue, happened some time while I was away this summer). 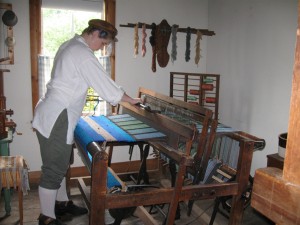 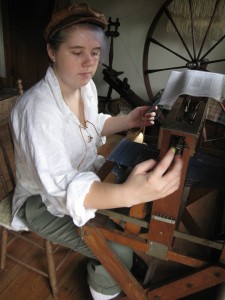 Here Brianna is demonstrating on an 1850’s Weaver’s Friend rug loom, which totally fascinates her.  She figured it out pretty quickly a couple of years ago when we first started demo-ing, it is a two shaft loom with a mechanism like the top of a carousel, where the horses ride up and down on a revolving cog, when one is up, the other is down.  When she beats the rag weft into place, a cog mechanism rotates the two shafts so the opposite one jumps into place.  It makes an incredible racket, and she loves to warn the little kids to put their fingers in their ears before she uses the beater.

In the second photo, Brianna is figuring out the overshot pattern on a nearby table loom.  She loves patterns and figuring them out. 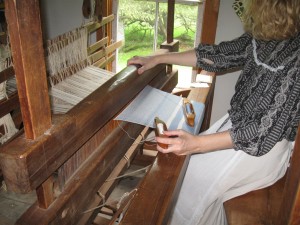 I’m growing fond of the big barn frame loom, that sits next to the rug loom in this very cramped tiny building.  The beater is worn so smooth, it is like glass, and members of the guild re-threaded the loom at the beginning of last season, so we would have something to weave since a few critters found that the linen warp made a nice warm winter bedding making it tough to weave with so many broken threads.

So I demonstrate this old 1700’s barn frame loom, which is clunky and graceful at the same time.  I often think, if only this loom could talk.  Where has it lived, who has woven on it, what children have played around it, and how many beautiful functional items for the home have been woven on it?

While we were at Millbrook, we stopped next door and chatted with the coopers, two woodworkers who were demonstrating making barrels, very technical work, and they are both trying to perfect the technique.

Sidebar:  Last summer, I taught a class at Peters Valley.  This particular class, which was designed to give an overview of basic fiber techniques to anyone interested in teaching fiber in a classroom, or using fiber techniques in their work, is one of my favorites.  Every three hours we move on to a new technique, it is a whirlwind of activity and creativity, and I bring a carload of equipment and supplies for it.  One of the techniques is of course, spinning on a drop spindle, made from a couple of CD’s, and when they have a sufficient amount of yarn, they wind it off onto a Niddy Noddy, an old measuring device used to skein yarn.

When I was first dating my husband, in the early 1970’s, his mother, an avid lacemaker and spinner, would suggest gifts for me for Christmas or my birthday.  One year, he bought me a beautiful Danish lace pillow.  Another year, Kevin bought me the most gorgeous hand carved Niddy Noddy, which I have cherished over the years.  I have no idea who made it, but it was purchased at a weaving store on Croton on the Hudson, somewhere in NY State.  The store is no longer there, I’m sure. 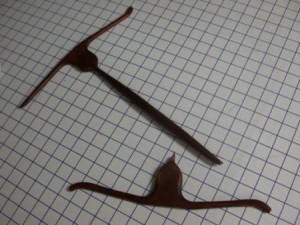 Last summer, one of the students in my Peters Valley class, wound off their yarn onto the Niddy Noddy, and failed to hear the part where I explained how to remove the yarn from the Niddy Noddy, over the smooth spoke, not the curved spokes.  To my horror, and I’m sure her’s as well, the Niddy Noddy snapped off at the neck, and I nearly cried.  Later, after the workshop was over, I wrote to a woodworker I had met the year before when I was demonstrating at another historic festival, who had remarked on the uniqueness of the design and loved copying old textile equipment.  He had made a lovely lucet and had given it to my daughter who proceeded to become quite the expert on the lucet and will give a program on it for the November meeting at the Jockey Hollow Guild.  But I digress. 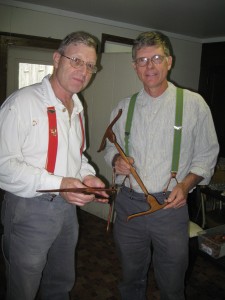 Wayne Grove, and Steve Wenzel, two very enthusiastic woodworkers, told me to send the niddy noddy to them, and they spent a few months trying to find the best way to repair a very splintered neck, too thin to be doweled for strength.  They ended up epoxying the neck back together, and repairing the finish, so the break is nearly invisible, but they used the opportunity to really copy the design and create a few new ones, with a slightly thicker and doweled neck that won’t be so fragile.

Wayne and Steve were the coopers demonstrating barrel making on the porch of the building next door to where Brianna and I were working in Hill House.  Wayne had brought my now flawlessly repaired Niddy Noddy, and the improved copy, and presented them to me, I can’t tell you how 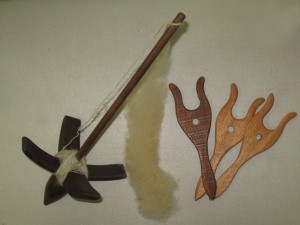 thrilled I am to have my cherished Niddy Noddy back, and a new one I can actually use without fear.

I bought a dozen lucets from Wayne, for the November class, and I also bought a Turkish drop spindle, which is a fascinating tool, it comes apart, into three pieces, leaving a wound ball of yarn.

Bri and I were exhausted by the end of the weekend, but had a great time, and I was thrilled with my new and repaired spinning equipment!

If anyone is interested in having one of the Niddy Noddy’s that Wayne and Steve made from my original, they cost about $150. and you can contact Wayne Grove at swgro78@embarqmail.com.  Wayne not only makes beautiful textile tools, he is better known for his Windsor Chairs.

Tomorrow: My adventures with Liz Clay