Actually, I’ve been home for a couple of days, but I got in really late Tuesday night, and I hit the ground running Wednesday morning, with very little sleep.  Could it have been the caffeine I consumed to keep me awake for the four hour drive Tuesday night?  Duh…

Anyway, I spent Wednesday morning with my 16 year old daughter at the local county college, where she was taking advantage of a HS challenge program and signing up for a class in Japanese.  Her five text books cost $125.  She was very excited to think of herself as a college student.  Of course she still has two more years of HS…  But it is a great opportunity and she will get college credit for the course.

I spent the rest of Wednesday unpacking, doing the laundry, actually working in the yard for an hour, which felt wonderful.  I haven’t spent any time, either working on or enjoying my lovely gardens this summer, and playing in the dirt after such a grueling six weeks of conferences was healing.  My husband, bless him, has done an amazing job keeping up the gardens which I assure you is NOT a one person job.  There is a ton of weeding that needs to be done, to be sure, but he has kept the worst of the weeds at bay, and installed a ton of downlights around the ponds, which glow like fairy pools in the late evening.  I’m looking forward to the fall, which is usually glorious in NJ.

Last night, my husband and I bought tickets, right before I left, for Noises Off, at the NJ Shakespeare Theatre which is housed in a gorgeous building at Drew University in Madison, NJ.  We bought the tickets based on the Newspaper review, which was stellar, and we laughed through the entire performance.  I adore British farces, lots of door slamming, flawless timing, as only a Shakespeare Company can do, and we enjoyed the show so much, we bought additional tickets for Twelfth Night, and The Grapes of Wrath, which close out the 2009 season.  In addition, we just received the season tickets for the Papermill Playhouse.  So much live theatre to see!

So today, I looked at my poor neglected house, and decided that I needed to spend the day, really cleaning it, which meant all sorts of detours, including cleaning out the snake cage.  Don’t ask.  I worked straight through the day, and only managed to clean one floor.  That’s what happens when you leave for a few weeks, the house gets dirty without you.  I’ll continue it tomorrow, but tomorrow, being the end of the month, is paperwork day.  I have a huge stack, all the accounts and bills have to be addressed, and that will be my priority tomorrow.

Since Project Runway starts in half an hour, I thought I’d post the photos of the jackets from my class at the Felter’s Fling.  They were amazing.  I had five students, and they were working like crazy right up to the end, there are still a lot of pins in the jackets, along with tailor’s tacks, and errant threads.  But everyone was really thrilled, they learned so much, and I heard from more than one student that, “they enjoyed this so much they might even start sewing!” 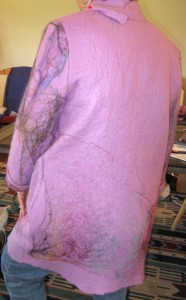 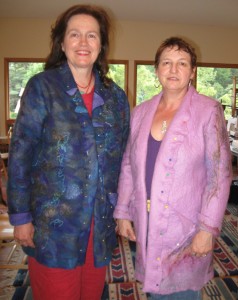 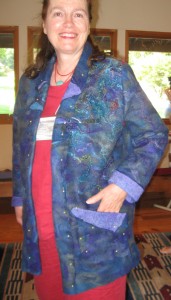 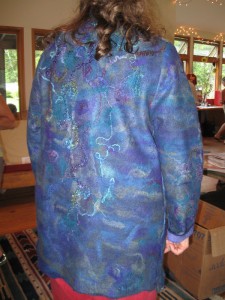 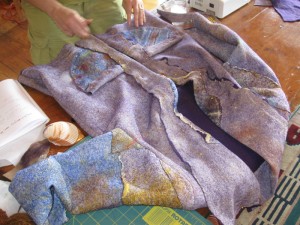 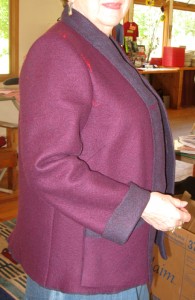 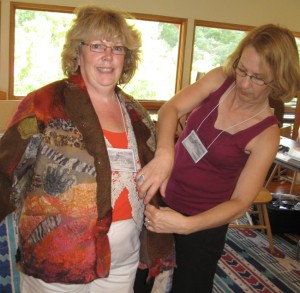 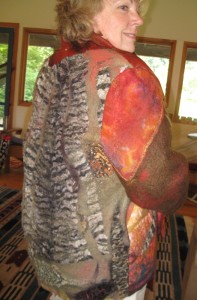