In all of my joyous exuberance of having space and time to actually start making stuff in my studio, I dove in head first and started a whole bunch of projects all at the same time.  Which might in certain cases be a recipe for disaster if one were to be distracted by said multiple projects but I of course am a professional.  I’ve been doing this for 40+ years.  I am not doing anything I haven’t done before, a million times.  Really.  Hahahahah!

So each thing I tried to do, well you can imagine…

At least the dye pots produced some new and fun colors.  Though I was going for a nice yellow.  Don’t ask.  I know what yellow is, I have yellow dye, but using Dharma’s Deep Yellow, a new color for me, I ended up with the orange.  At least it is a pretty orange. 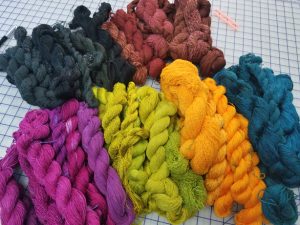 I wound my warp with the Harrisville Singles and ancient Maypole Nehalem worsted from my stash.  I counted perfectly.  I knew exactly how many ends I had to work with.  So you can imagine my shock when I was completely sleyed, yes I warp front to back, and had two inches left over of the Harrisville Singles.  Two inches.  Not two ends.  Two whole inches.  What an idiot.  I love though, that mistakes in fiber are for the most part fixable, since it is just fiber.  You can always rip it out.  Or toss it aside in this case. 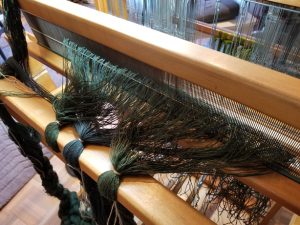 I threaded the warp pretty quickly, though I was smart and precounted the heddles and yes, there was a bit of moving around.  (Apologies to the readers who are not weavers, this will make no sense, just trust me that my errors were stupid basic beginner errors and enjoy that even the most experienced of us can screw up.) 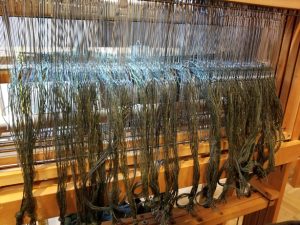 I beamed onto the back and tied onto the front and then carefully wound all my pirns, numbered in order of one skein of Noro for the weft.  This is important because Noro has a color repeat throughout the skein and the pirns have to be wound in order and then used in reverse order. 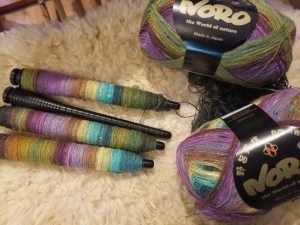 I tied up my treadles, using the little treadle tie up diagram in my Davison, the green book.  You know the one.  From the 30’s.  The one that is designed for sinking shed looms.  And of course I have a rising shed jack loom.  Yeah, that one.  I’ve known for 40 years that Davison is a sinking shed book of drafts.  No problem, just reverse the tie up.  Everyone knows that.  I’m guessing you, dear reader can already see where I’m going with this.

I start weaving and it just isn’t looking right.  I’m looking at it from the left, and from the right and about three inches in I realize, head smack, duh, I tied the treadles as instructed which means I’m weaving upside down.  I could have left it but I wanted to see the right side.  I’m like that.  No problem to reverse the tie up, I was only three inches in.  I continue weaving and am now about 6 inches in and am satisfied at how it will look, and pack up everything for the night.  Which meant gathering the remaining pirns and putting them decoratively by the loom.  I glance at the numbered ends and see number five in my hand.  Number five in my hand.  Not in the shuttle.  Number five was the last one I wound.  It should have been the first one I started to weave with.  I looked in the shuttle and sure enough, there was number one.  What an incredibly stupid mistake.  It will now throw off the entire color gradation of the ball.

It was after 10, and my intent was to go to bed.  But I knew this was messed up and I didn’t want to face coming back to it later the next day.  When I was a kid, learning to sew, I remember that when I made some critical error, I refused to stop until I had corrected it.  I’m like that.  So I carefully unpicked more than six inches of weft, singles weft, in sticky singles warp.  What a bi**h…

At 12:30 am I had unwoven everything, the weft shredded badly toward the end, but I don’t think I lost too much.  I had to figure out how to carefully wind it back onto the pirn so it would fit, which took another 15 minutes.

Saturday morning I rewove the six inches, emptied pirn number five, and started in on pirn number four.  And I used the inverted treadling sequence.  And I like what I have. 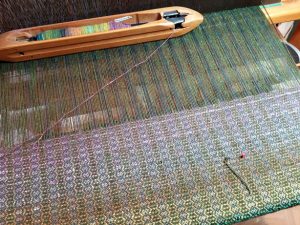 Meanwhile, I laid out a new scarf run, based on an old color forecast I wrote for Handwoven Magazine, something called Feminine and Serene.  It was a pretty combo, and I began pulling the colors for it.  I love this part, I find stuff I didn’t remember I’d had, use odd bits I’ve saved in bins, combine colors and textures I wouldn’t have thought of, but first all the skeins have to be balled. 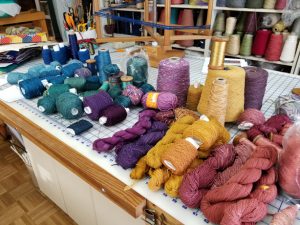 My trusty studio assistant Cynthia came up Saturday morning to finish winding all the balls while I started winding the warp. I had half the twelve yard warp finished by lunch. 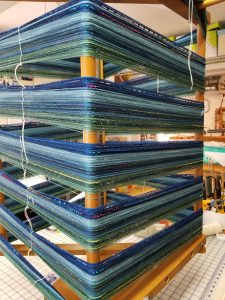 I wound the second half by late afternoon. 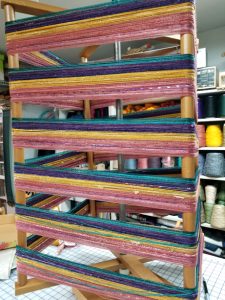 Sunday morning I thought I’d get started tying in to the previous warp.  When I finish a scarf run, I re-sley the warp ends, three per dent in a divided reed, so all the ends beam individually even though there are three or more threads per dent.  Of course I’m a pro at this, and trust that I don’t make mistakes.

I started tying in the new warp, and something just wasn’t right.  The numbers weren’t working out.  And know that this warp is not random, it is carefully calibrated Fibonacci numbered stripes of twill and plain weave with supplemental warps.  I sell the draft in my eShop, it is called Gradient Scarves. 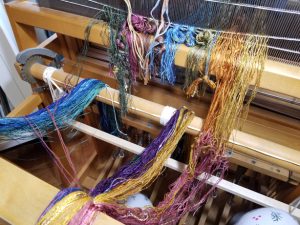 It took me almost a quarter of the tie in to figure out that I wound the warp backwards.  Talk about a head smack.  How the heck did I do that, I must have wound a hundred of these warps over the years.  What a stupid mistake.  So I carefully clipped each thread I’d tied on and reversed the warp and reconnected to the other side.  I had fixed that and was well on my way when I noticed that again, the numbers weren’t working out.  After more head scratching and gnashing of teeth, I realized that back when I originally sleyed the warp, after finishing the last run, I had somehow dropped two ends, which were apparently never there to begin with.  I double up and eventually added the two threads back in and then fixed the reed after it was beamed.

And finally, I started to weave.  So I have two looms filled with long warps and they will be waiting for me when I return from California.  I have a third warp possibility sitting on my cutting table. 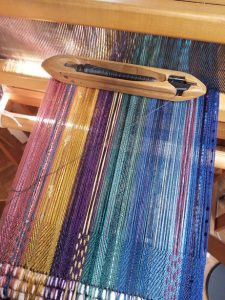 The real issue is why I’m making such stupid basic mistakes.  Yes, I’m distracted by a number of things involving people I love that I can do nothing about but still haunt me.  Yes, I’m trying to do too many things at once.  Yes, I haven’t put a warp on the loom in a very long time and I don’t count the half dozen warps I just put on for the 16 page Doup Leno Article I just wrote for Heddlecraft.

The really important thing here, is that in fiber, almost everything can be corrected.  Mistakes are just silly and can be ripped out for the most part and reworked.  I tell my students, about to cut into their handwoven fabric, that pretty much nothing they do in my class will cause anyone to die.  It is just fiber.  And so, in all my distractedness, I stayed with all the mistakes and saw them through to the end and it gave me just a little bit of hope.  Because really, most of life we cannot change and I am always so very grateful when it is something I have control over, like unweaving six inches of pattern out of wool singles, this I can do.  Painfully, but I can do this.  I can’t fix the issues with my children, or my town or my country, or the world, or the stupid weather, but I can fix my errors on the loom.  It is the little things…

Yes, indeed! Sometimes we just need to have a little ‘control’ over our lives via our fibre practice. Sometimes it’s the only ‘control’ we actually have…

And such a great feeling knowing that you, you-yourself, figured out all the problems and figured out how to correct them. A pat on the back, another cup of tea, and a break. The weaving won’t be half the challenge now. Thanks for sharing what we know will sometimes happen.

What with all of your recent head smacking, I hope you are lined up for a good massage! It’s not like you to have so many little things go wrong — but, as you said, in weaving, it all can be corrected. Your warp looks pretty and wil make some nice scarves. Happy weaving! Hugs, Nancy

At least it wasn’t mohair. Miss you!

Dear Daryl,
You have no idea how much better you’ve made me feel about all of my mistakes!!

I do love you, Daryl. You are the most “perfect”, inspiring person in my fiber world and you too make dumb mistakes! And it doesn’t throw you! See you in FL in March.

Thank you for a wonderful post! Hang in there!

We had a Guild board meeting today at my house and one of our newer weavers was commenting on mistakes she had made. She was gobsmakked that experienced weavers do stupid stuff still: I was warping a guitar strap. Knew I had some tricky repeats in the weft and completely forgot to warp the simple 2x repeats. No wonder my carefully designed, short float, twill didn’t work. At least it was only 2.5 inches, but rethread and resley I did! I do double warps on my warping board and 3 of the last 5 warps, I have had extra ends.… Read more »

I enjoy all your posts but this one was especially meaningful. I think it was the last paragraph about knowing what we can and cannot do. For me working with fiber helps to offset the ‘crazy’ around me. I like how you put it. Thank you for all your words. 🙂

Dear Daryl, this made my heart say “yes”. I so fully appreciate the opportunity to solve all that is wrong at the loom, to take my mind off the myriad of ills that I can’t affect. Holding you and you family in my heart. Weave on, Sister, weave on.

Well in my case it was mistakes that weren’t caught until I cut the scarf off. The benefit of weaving for non-weavers is that they don’t seem to care. What matters is really what matters: someone took the time and put in the effort thinking of them.

When it rains it snows…

Just once I'd like to go to bed at night and think, "What a boring uneventful day.  Nothing happened, no...