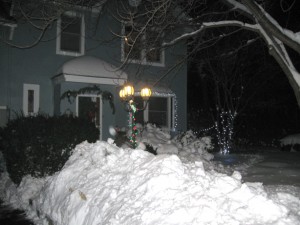 It continued through dragging 75 pounds of stuff across campus to my first class at the community college, (which I will say was a blast!).  It continued Wednesday as the serious snow began, and into Thursday when we got a mere foot of snow, we were lucky, NYC got 19 inches.  It continued as the water dripped from the 18″ icicles hanging from the roof, creating piles of ice four inches thick.  It continued as I drove over treacherous roads to pick up my basket of organic produce (definitely worth it, gorgeous fresh organic goodies…) It continued as we tried to clear away the snow, the piles are getting so high there is no place to put it.

It continued as I plodded along all week writing proposals for Convergence 2012, not knowing where it was going to be, just that it was in the US and probably I couldn’t drive there.  As I wrote the last proposal, the note came into my inbox that the 2012 location would be Long Beach, California.  Great location, should be a lot of fun.  Nothing beats Southern California for a fresh approach to fiber!

It continued as I tried to help my 18 year old daughter study for her AP English midterm exam, spending hours reading passages and answering multiple choice questions regarding contextual analysis of said passages, and remembering why I went to art school instead of becoming an English major…

And it continued into today, reluctant as I was about going into NYC in all that muck and slush, I rallied myself, in my Zen state, and hopped a bus into Manhattan, to meet up with my weaving buddy Jody from Rhode Island, and her two felting friends from Prince Edward Island.  What an amazing day! 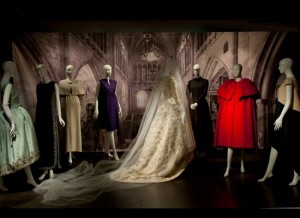 We started out at the Queen Sofia Spanish Institute on Park Ave @ 68th street.  I wanted to see the Cristobal Balenciaga retrospective, mentioned it to Jody, and everyone decided it would be a great way to start the day.  I highly recommend if you can get yourself into the city, to catch this exhibit before it leaves February 19th.  What I loved most about it, besides the spectacular clothing, was the way Hamish Bowles curated the exhibit linking Balenciaga’s influences from his native Spain, religious garb, bullfighters, native dress, the flamenco dancer, art work from the Spanish masters to the actual pieces.  It was a fabulously installed exhibit. 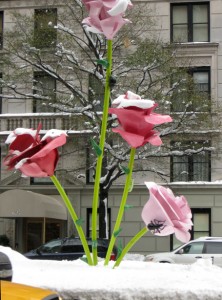 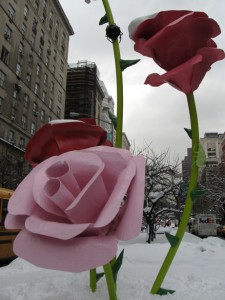 We headed over to Madison Ave to see Julie Artisans’ Gallery, and as we crossed Park Ave. we came upon these amazing stainless steel and fiberglass sculptures, “planted” down the median, called “The Roses” by Will Ryman.  They were especially fun full of snow and dripping icicles. 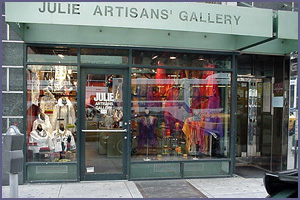 is always a must see stop when I’m uptown in the 60’s.  There is always something new and fresh.  And the staff there is so friendly and generous of spirit.  The have the greatest display of vintage Bakelite bracelets and oddities I’ve ever seen.  This photo is from her website, currently there are some fantastic nuno felted coats in the window.  Did I take a photo?  No…

Julie gave us some wonderful recommendations for places to eat, so we continued back over to Lexington, and stopped at Le Pain Quotidien. I never got past the blackboard specials, the arugula salad with artichokes and Edamame and crisp prosciutto.  There was a Masala Chai Latte, and the bread pudding with blood orange marmalade was a to die for. 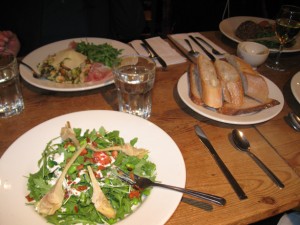 We all enjoyed lunch, and then headed downtown a couple more blocks to Tender Buttons.  I am amazed at how long I’ve lived just over the river from NYC and I never managed to find this place. 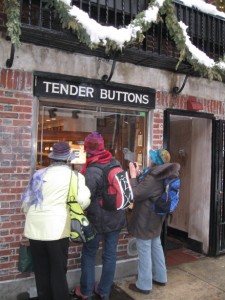 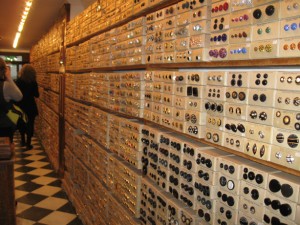 Walls of buttons.  The most amazing experience.  Some of the coolest vintage sets.  I figured I’d be completely overwhelmed, but almost immediately I zeroed in on these couple of buttons, and the more I looked, the more I came back to them.  I decided that I had to bring them home with me.  Yes they were pricey at least by my standards, but they were so gorgeous.  They are abalone shell, but the texture and color of the surface was exquisite.  This is what $100. worth of buttons looks like.

Totally worth it.  I carried my treasure in the tiny little bag, and hugged my friends and headed down to the Lexington Subway stop to pick up the train that would carry me to Grand Central Station where I would pick up the shuttle that would take me to Times Square where I would walk along the tunnel under Manhattan to Port Authority where I would pick up the bus to the NJ Transit Center and gather my car for the short trip home.  I caught every connection perfectly, and knit the ribbing on a new pair of socks on the bus ride home.  I’m exhausted but still in my very Zen state.  And I found online yoga classes, for a modest monthly fee, fantastic classes, Yogaglo.com, so tomorrow morning I’ll do my second class this week, and hope my Zen state lasts for another week…

(edit…  I resorted to alcohol when I just discovered that the heating system in the house is down.  It is too late to call anybody, so I’m trying to figure out how to dig through the piles of snow in the dark to the reserve woodpiles in the back of the property to fire up the woodstove…)

not a good way to end a perfect day. Where is the next convergence going to be?

Would LOVE to go to the button store. Sounds like you had a fun day, almost to the end.

What can be more unnerving then a furnace failure when snow is piled up to your whatever? Are you-all keeping warm? I believe I was in that button store some years back! Nothing like NYC for a sewer.
Long Beach; attended a great wedding there in Sept.

Oh, Daryl. Here’s hoping you found some dry wood. We almost never – as in once in 15 yrs – use our electric central heat, relying on our wood stove. The wood heat is so comforting.
Alcohol is good, too. Combine them, zone off into dreamland & worry about things, tomorrow.

I am so jealous, (in a good, smiley way, of course,) button stores?! Whole stores of buttons? & roses in the midway! Maybe, someday, I’ll make it East & see the wonder that is New York.

I too am jealous of not having NYC at my fingertips anymore. Florida has its bonuses, but no great button or fabric stores. I miss the garment district and stores filled to the rafters with goodies, where it would take hours to come out of. Glad you have heat again. Miss the smell of the woodstove too. no such thing here. 🙁

I ran away for the weekend…

Apparently I hadn't told too many people I was going away for the weekend, my husband claims I didn't tell...