On Friday afternoon, my middle sister emailed me to make sure I had sent an Easter Basket to my son at Fort Sill in Oklahoma.  Ooooops…  I felt like I was just awarded the bad mommy of the year award, in fact not only had my sister sent a care package, so had my mom.  As a matter of fact, I had forgotten all about Easter baskets, my children are 17 and 20.  When does this stuff stop?  I asked my 17 year old daughter if she needed an Easter Basket this year, and her response was sort of vague…

Mom’s response: “Does that work for you again this year?  What game do you want?”

Her response was vague, sort of an, “I’ll get back to you on that…” and I went about my day.

Yesterday morning, while she was at work, she texted me the following:

“what i want for easter is a coloring book…or two…and mabey sticker sheets” (OK, she is a math genius but can’t spell, just like her father…)

COLORING BOOK?  At 17 years old?  I asked if she wanted Crayons too, and she replied:

“i have colored pencils that i got from CVS at 9:55 one night cause i had the irresistable urge to color and i didnt have any” (Apparently she got in the car and drove herself over to CVS one night for a late night craving of something to color with.)

Here I replied something about being quite sure there were coloring pages available online for those late night cravings.

“i know but they dont print right and half of them are no fun. and it doesnt matter what the coloring book’s subject is…as long as it has lots of stuff to color” (Here she explained later that having a black outline of a squirrel from the internet isn’t much fun to color, she wanted the whole setting, the squirrel in the tree, with birds, and nuts, etc.)

I remember coloring books.  I grew up with them.  When a relative came to visit, it wasn’t unusual for them to bring a new coloring book for my sisters and me.  I actually loved to color.  And I was absolutely the best at staying in the lines.  Sort of says something about my personality.  I prided myself on my perfect careful coloring.  And trees were green and the sky was blue.

Of course all the coloring books we had around the house were tossed probably around the time my daughter turned ten.  So there weren’t any to satisfy those midnight urges, who knew?  It was an odd Easter Basket request, and I wasn’t even sure who sold coloring books in town.  We use to have a Cost Cutters, good for stuff like that, but they went out of business when Drug Fair went bankrupt.  So I went to CVS, and it took awhile to find the right aisle. It was back behind the cosmetics.

Can I say here that coloring books aren’t what they use to be?  Mostly the books I saw were combination activity books, designed to teach numbers, letters, reading, and general preschool life skills.  Not really appropriate here, my daughter is top of her class in Honors Calculus and Physics.  There were lots of Sticker sheets, and those were fun to look through, finding ones that my daughter might like, ones with puppies, Japanese animé, etc.  But as I searched for the perfect coloring book, I was suddenly taken back to my childhood, and how much simpler life was in terms of play.  I had recollections of books that had mazes, and “find seven hidden objects”, and puzzles like that, but the skill of just coloring, without trying to learn to read at age four seems to be outdated.  I remember paper dolls.  I loved paper dolls.  Carefully cutting on the lines was an amazing centering skill that took patience and practice.  I played with paper dolls until I was well into my teens.  I had younger sisters and at some point, we began to design our own. (See essay I wrote on designing my own paper dolls) 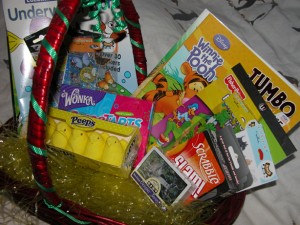 I found a couple of books that could work, one had stickers in the middle, but it wasn’t until I hit Walgreen’s that I found a plain old coloring book with scenes from Winnie the Pooh.  Even the texture of the paper brought me back to my childhood.  I picked out a couple of card games, my daughter and I love to play cards, Quiddler, Five Crowns, and Bananagrams.  They had a deck of Scrabble Slam, so I added that on a neighbor’s recommendation.  I picked up some Sweet Tarts Bunnie Gummies, and of course, no Easter Basket is complete without Peeps.  We don’t really like or eat Peeps, but it is a sort of tradition, especially after viewing the winners of the 2010 Washington Post Peeps Show.  If you haven’t seen or don’t know about this event, it is fabulous, entries come in all over the world with themed dioramas involving marshmallow Peeps.   My daughter and I collectively cheered when we viewed one of the five finalists this year, a perfect recreation of “Good Night Moon”.

I don’t know how long the Easter Basket thing will continue in our house.  But I learned something this weekend.  You are never too old for coloring books, and marshmallow Peeps, and Easter Baskets.

Last year our 30 year old married son asked where his Easter basket was and I told him he was too old. He was disappointed! So this year I put together a basket with Peeps, a chocolate rabbit and some chocolate eggs!

My kids are 36 and 33 and still love all the stuff you are writing about. Diet goes to the wind when the chocolate Robin’s Eggs show up in the store each year! And we all three watched Where the Wile Things Are Yesterday before Easter dinner. Never too old……

Who knew? I just had a similar experience with my daughter, 20, a sophomore in college, who informed me that her friends at school all got such packages in the mail and one set of parents even delivered personally. And here I am, trying hard not to be a ‘helicopter parent’ and respect her obvious wish to gain her own independence (expressed in a deliberate manner for me to know as little as possible about her activities). I’ll be hitting the leftover Easter stuff on sale today to make up for what has been perceived as neglect by my bright,… Read more »

I give my kids (22, 21,& 20) a chocolate Easter Bunny every year, my husband always teases me that I think they’re still babies, but to me they’re my babies… That’s a really cute story amazing what they really want sometimes?

Do you really not know about Dover coloring books? We get a catalog but I’m sure they are on the internet too. Coloring books of every subject, historical, natural, non-objective–she would love them. I always have a bunch on hand for last minute gifts for any age! Including ones I do myself–or just look at, or hoard.

But I can really relate to the “they’ve outgrown that” predicament! You are a VERY good mommy. 🙂 Nanette

Oh Duh… I probably have some Dover books on the shelf. Completely forgot about them. Thanks for the reminder! She was happily coloring Winnie the Pooh and Tiger walking through the woods, last night after finishing up studying for the Advance Placement History Exam.

Michael’s also has a great selection of coloring books. These are for all ages. The adult day care center where Mom used to go to, got their coloring books there. All types, especially large flowers and birds, Mom’s specialty. They had all the residents color them and then the pages were taped to the walls. I guess I am also a “bad mommy” as I did not send my 24 yr old anything for Easter, just a card. So far, he has not complained. We shall see….. By the way, you are a terrific Mom, always have been!!

Michael’s! Now there’s another great tip. And of course Michael’s has coupons! Thanks everyone for all your support. Maybe I’m not such a bad mommy after all…

I love Peeps! Just bought my yearly pack of four or five of them and ate two….the rest will probably harden into rocks and I will find them in the Fall…back of the cupboard where they ended up. I too was a big paper doll cut out person. Guess I still do that, just full size now! I found my first paper doll cut out book the other day. Barbie and Ken, the first cut out book. Bought it in 1971, for 50 cents. NEVER cut into it. NEVER touched it at all. Perfect condition. Figure it will be worth… Read more »

Loved the “peep” show. Thanks for posting the link. They were very creative.

Sometimes it’s nice to take a day off from being grown up. Our kids need that. Glad your daughter enjoyed her Easter basket.

A Tale of Two Dish Towels, 4000 pages later, and other random stuff…

A good weaving buddy of mine recently contributed to a series of interesting comments on my  Facebook page after I...