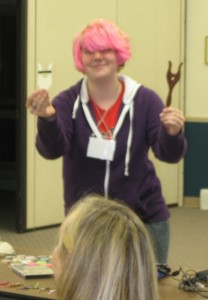 Starting with last Wednesday, my lovely talented daughter with the pink hair, gave a presentation to the Jockey Hollow Guild on braiding with the lucet.  I couldn’t get her to hold still long enough for any decent photos, and then I got too into helping people with their braids to take a group shot, but here is a slightly blurry photo of Brianna holding two different types of Lucets.  The Y and the Lyre.  Everyone seemed to have a lot of fun, and we sold a number of the Lucets we had purchased last summer from woodworker Wayne Grove.

Side bar: Bri turns 17 tomorrow.  She is focused on her driving test, which is also tomorrow.  We all hope she passes her test, no one wants to be around a 17 year old who just failed their driving test, so we are all crossing our fingers she’ll do just fine.  She is a good driver, and I’m looking forward to her being a little more independent.  Meanwhile, she is working on so many different things, it makes me look like a slug! 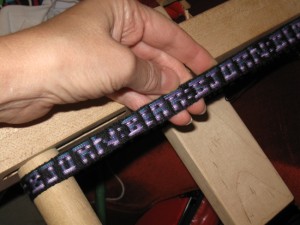 She showed her latest Inkle Loom band, a collar and leash for her new dog named Bjorn (Norwegian for Bear), at the guild show and tell.  She heard you could do an alphabet on the inkle loom, I directed her to an article in Handwoven Magazine,  May/June 1999, about weaving an alphabet.  So she looked up the article in my vast archives, and figured it out.  I love the way she just dives in.

She also has been watching one of our guild members crochet.  She sits next to Cathie at the meetings, Cathie is as creative as Brianna is, and the two of them always have their heads together.  Cathie crochets, and Bri has been dying to learn, and I haven’t had five minutes to teach her.

So Bri got tired of waiting for me, and last night, after taking a Vivarin to keep her awake to finish her psych paper, which she finished, but the Vivarin hadn’t worn off (Vivarin is straight caffeine), she tried to figure out how to crochet based on what she remembered 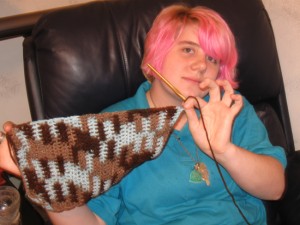 from watching Cathie.  But she couldn’t figure out how to start.  This is where I’m so jealous of this generation of kids, who have never known a life where you couldn’t get an instant answer on the internet.  So she Googled how to crochet a scarf, and got a photographic tutorial, and when she came down in the morning, she had already crocheted about 4 inches of single crochet from yarn we picked up the other day at Michael’s Craft Shop (like I don’t have enough in the studio…)

I did however, teach her how to do a double crochet, which goes a lot faster and will make a scarf more pliable.  She immedi 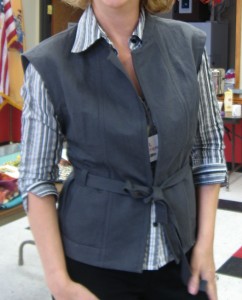 ately ripped out what she had done and started over in double crochet.  Bri loves fat variegated acrylic  knitting yarn for finger weaving, another of her skills, so that’s what’s in her stash.  It is fun to have separate mother and daughter stashes…

I promised a photo of one of the vests I picked up in Atlantic City last month, or was it last week?  Here is the Kenneth Cole vest, I loved the styling and the details. 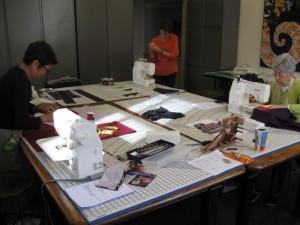 On Friday morning, I headed into Newark to the museum, to teach a two day class on making a vest.  I was thrilled when I got there to find out I already knew everyone in the class, they all had taken classes with me before, or I knew them from my guild, and we had a lot of fun together.  One of the students had a family commitment the second day of the class, so I only have photos of three.

The vests need finishing, and  a lot of handwork, but they are really pretty and so individual. 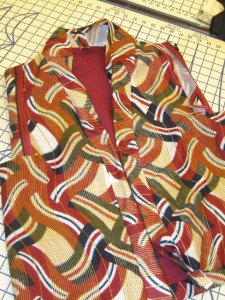 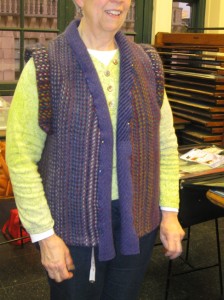 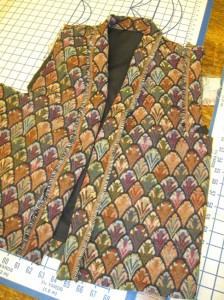 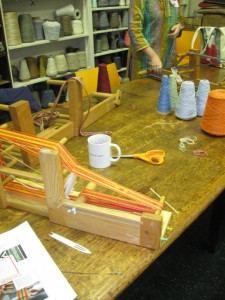 On Sunday, I returned to the museum, to teach a one day class in Inkle Loom Weaving.  I had four students, an easy class, and I already knew two of them.  They made some really pretty bands, and we had a lot of fun. 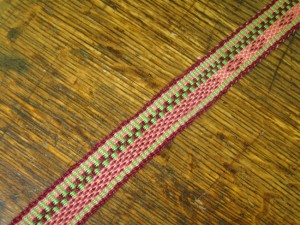 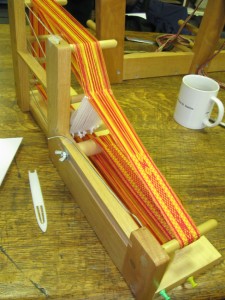 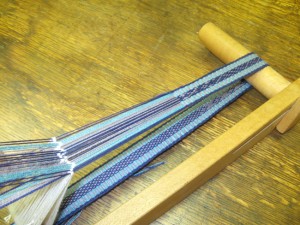 I’m missing a photo of the fourth band, a really pretty one, and I’ve emailed Dolly to see if she can get me a photo.  Dolly is a felter, I met her at the Felter’s Fling a couple of years ago.  It is great to see the cross over of fiber disciplines, felters can use Inkle Woven bands as handles for felted bags, and all sorts of trims.  I 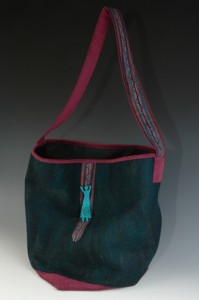 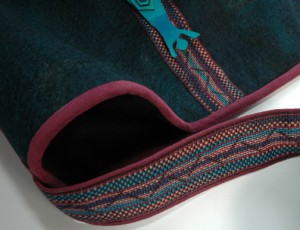 felted this bag after attending the Fling, and combined Ultrasuede with an inkle woven band for the handles.  I love the dancing woman pin I purchased from one of my favorite craftswomen, Cheryl Olney, who goes by the name of Louise’s Daughter.  I called the bag, “Celebration Bag”.

Thursday through Saturday night, we raced over to County College of Morris,  after I finished teaching each day, to attend the evening performances of their fall musical, “Once on this Island”.  I’ll post about that tomorrow, since I worked on some of the costumes for the show, as soon as I can get the photos from my husband, who took about 500 images during two of the performances.  And then there was the guild meeting today where we all learned how to twine a mat.  Stay tuned…

Just touching base, lots happening, and I'm heading off to the Newark Museum.