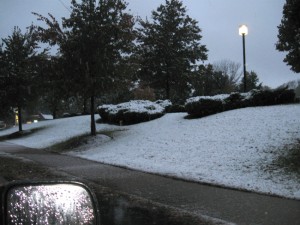 What an odd week.  Thursday night I drove my daughter to the community college, which was west from where I live about 20 miles.  We were as I’m sure you’ve heard, having an early in the season nor’ easter.  It was windy, rainy, cold, and just plain miserable, but the further west I drove, the colder the temperatures got, and when I got near the college, I couldn’t believe my eyes, it was snowing!  Hard!  The snow was coming down in thick wet flakes, and sticking all over the greenery, and the oddest thing, the leaves are still turning and so they are all still on the trees, so the picture of huge clumps of wet snow piled on the leaves still on the tree was something out of the twilight zone.  Even made the front page of the papers.  It was hard to get a good shot, the car was moving and it was dusk.

Then, an even odder paranormal experience happened yesterday.  My 19 year old son was so desperate for money, he agreed to help me clean the house.  That’s right, he and one of his friends, joined me for a housecleaning party.  This was probably one of the most unusual occurrences, I’m teaching them how to clean windows without streaking, scrub toilets, clean stove burners, dust, vacuum, etc.  It was actually fun and they did a pretty good job.  My toilet has never been so shiny.

So off my son went, with $25. in his pocket, promising to come back and do the upstairs with me, which of course he didn’t, but paranormal things don’t happen on a repeating basis, so I

can only have this one memory of the day my son actually housecleaned.

I’ve been working on the vest I started last week, from the old alpaca and wool throw I made in the 1980’s.  And I’m working on my next article for SS&D, but I haven’t been at the loom or sewing machine in awhile and I was starting to hear the call.  More like a megaphone shout, but I heeded the 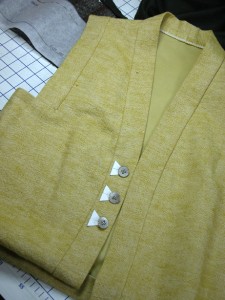 call and decided to start on the vest.  I wanted to do some extreme details, partly to use it as a teaching piece, and partly because I wanted this vest for me.  I had three smallish buttons that I thought would look good with the fabric, and tried them on an existing muslin sample of the same vest style, so I could get a sense of placement and proportion.  I also thought I’d like the vest shorter than my original pattern called for.

Then I made a template for the triangular bound buttonholes.   The band on the front of this vest, which is the same as the one for the jacket pattern I use in classes, is pretty narrow.  I’ve wanted to try to see if I could do this type of buttonhole in this tight of a space, and I’m still not completely sure how this will all work, but I decided to plow ahead anyway, because not knowing how I’m going to do something has never stopped me before. 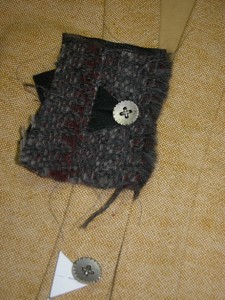 Then I made a test buttonhole from the actual fabric.  The buttonhole came out too big, so I scaled it down some more, and then stitched the grid on the band piece and jumped in head first. 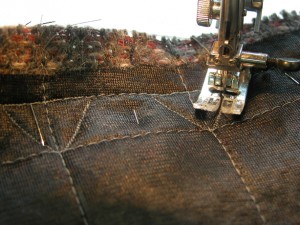 It was difficult to work so small and cramped, and more than once I had to take out the tiniest of little stitches.  And I spent all morning working on these three little buttonholes and their window backs.  But I’m happy with the results and can’t wait to see them on the finished garment. 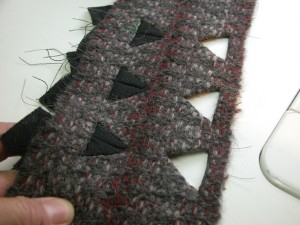 Meanwhile, I needed to piece the armbands, since I had to use tiny scraps to create them. 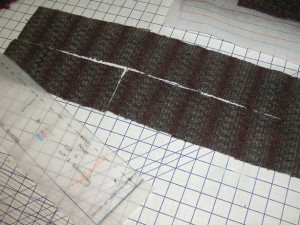 My original intent was to make bias tubes to cover the butted joints, like I do on my other pieced things, but I didn’t want the contrasting line to compete with the gorgeous 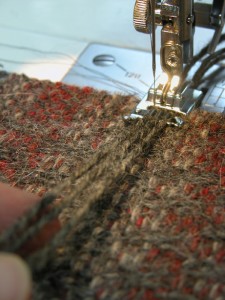 buttonholes.  So I played around, with my seriously tiny bits of scrap, and came up with this solution, I had a good size wool yarn that matched the fabric well, threaded three ends through my 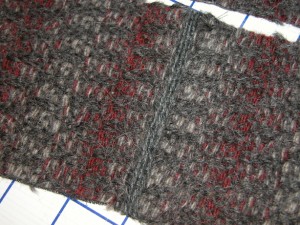 cording foot on my Janome 6600, and did a triple step zig-zag to couch the three ends over the butted joints.  I should mention I fused all the little pieces together onto a fusible knit backing first.  This worked well to make a flat invisible join on a lofty fabric. I duplicated the couching on the other band, even though it was cut from one straight piece of fabric, just to be consistent.

I love the buttonholes. Did you use synthetic suede for the triangles?

No, not on this vest. I used the left over scrap from another project, of a dark rayon/poly fabric. It was crisp, but flexible. Because the lips of the buttonhole are stuffed with the seam allowances, the fabric shouldn’t be too heavy, especially in this small of a buttonhole.