What an odd day.  I had some very sad news this morning, after my celebration yesterday of my 7th anniversary of my cancer diagnosis, one of my very best friend’s was diagnosed with breast cancer.  I’m so sad for her, this is such an epidemic, that I almost feel like it isn’t a matter of if, but when…  The good news is that it is in a pretty early stage and with careful treatment it should all be fine.  But that doesn’t help right now, you still have to go through the misery and fear of a diagnosis, not everyone responds to your news in the best most supportive way, and the road will be a thorny and uncomfortable one.  But like I told her this morning, what ever side of the spiritual fence you sit on, I firmly believe that the universe sends angels, lots of them, to guide you through this maze, and they are always there in disguise, you just have to know they are there and look for them.  The fiber community really rallied around me when I was diagnosed, I got some lovely cards, handwoven scarves, cookies in the mail from Connecticut, love and support through phone calls and emails.  Oddly enough my favorite emails came from Duchess, a lovely black Labrador who had also just had a mastectomy and we corresponded through her owner for a couple of years.  Oh, and I loved the email from some wonderful angel who said to me, “You can’t die, because I haven’t taken a workshop with you yet.”  That might sound like an odd thing to say, but it gave me a good laugh and kept me going through another couple of chemo treatments, it lifted my spirits in a way that said, I was so much more than this disease and I wasn’t done here yet.

I also had a phone call which thrilled me, the rumor from a very reliable source, is that Pellon will eventually be printing the red dot plates onto a pattern medium they already had in the archives with seems to be identical to the base fabric of the original red dot tracer from HTCW, which has sadly been discontinued.  If you haven’t followed this thread of the blog, I’ve been in hot pursuit of a suitable pattern tracing medium to replace the discontinued Red Dot Tracer, and it seems I only have to wait a bit longer.  🙂

I had to switch gears today, I wanted to send a piece to the members exhibit at the Surface Design Conference in Kansas City.  The deadline is March 1st.  I was under the assumption that they wanted an image by March 1st, but when I reread the prospectus, it calls for the actual piece, 18″ square to be sent to them by that date.  I had been planning to use the photo of the 16″ version, and if accepted would weave the 18″ version.  But alas, they need an actual piece. 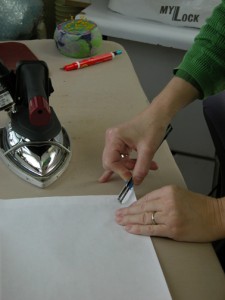 So I brought my table loom over to the cutting table , which is really convenient because I can stand and cut the strips as I weave them in.  The second or third blog I wrote back in December described the process and gave the draft, using a Theo Moorman threading. I weave about a quarter inch of ground fabric, then lay in on top a thin strip of silk, and hold it down with poly sewing thread which is warped in with the cotton ground. The strip is part of a childhood photograph I printed on 10mm silk Habotai, which comes on an 8.5″ x 10′ roll, pretreated for ink jet ink, and mounted on paper for easy transport through the printer. I got this from Dharma Trading. By running two  lengths of this silk, 8.5″ x 16″ long, I could print a much larger image, since I’m stripping it anyway, it doesn’t matter if it is in two  pieces. 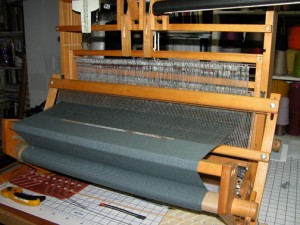 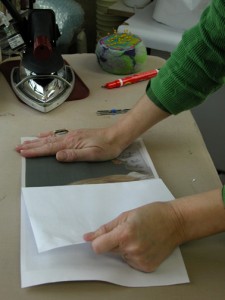 cutting the strips of silk, I cut them about 3/16″.  You can see there are two big sections that make up the image.  The last photo is of the table loom, you can see I have two strips woven in already.  I’ll describe more about the weaving process later.  I figured out a way to do a pick up of the tie down threads so only the ones I need are actually held out, the rest on the side get woven into the ground.

This will be a slightly larger version of one I sold, called Big Sister. The photo is from around 1957, of my younger sister and me, caught in an intimate moment. The photo  is the smaller version.  In the December blog, I was weaving the same piece, but 24″ wide.  My sister saw it on my blog and tearfully requested one for her, she even offered to pay me, but since she is the other child in the 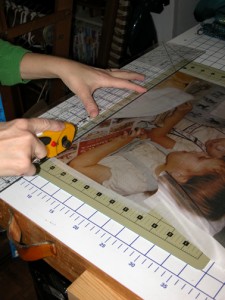 photograph, it is only fair she gets this one once I have exhibited it.

A special anniversary as I celebrate 7 years from the day I was diagnosed with breast cancer.