I am seriously sick of winding white warps.  I’ve solicited the help of everyone in my family and they’ve all given up.  But, I have made exceptional progress, I dare say I am probably about finished winding a huge amount of 10 yard white warps in anticipation of spending a week or two dyeing/painting, and generally turning all that white into some kind of organized color.  Or disorganized, either would work.

I follow a couple of blogs religiously, and one of them is of course, Stephanie McPhee, the Yarn Harlot.  She is hilarious, and one of the best writers, and of course a fiber junkie.  She is a knitter, and I’m really not, but it doesn’t matter, there is always something about one of her posts I find I can identify with, and come away smiling.  Except the one today.  I came away smiling, but I also came away shaking my head.  Stephanie talks about her stash being like an archeological dig, which I can identify with, but then she goes on to talk about “a ritual tossing of the stash spring and fall.  It’s the time of greatest activity for insects and rodents.”  Huh?  She also mentions she finds stuff she didn’t know she had, like the yarn from all the way back to 2005?  Huh?

Let’s be clear here.  This is not a serious stash Stephanie discusses.  A serious stash goes back to stuff from your mother, maybe even grandmother.  From retired or deceased guild members, stuff they got from the original founding guild members.  I’ve got yarns from the 1970’s, and cloth from when I learned to sew in the 60’s.  Not too much of that, but still.  I’ve got a ton of stuff I’ve inherited, and lots of cast off’s from other weavers who were de-stashing… Weavers don’t buy a couple of skeins to whip up into a pair of socks.  We buy by the cone, or by the pound.  So unless we make a couple of scarves here and there, a ball or two of yarn is merely for sampling.  I’ve been known to buy 5 pound cones of something if the price is right and there is a spitting chance I’ll use it before I die.  Even then, some lucky recipient will inherit that 5 pound behemoth if I don’t and it will live on in someone else’s stash.  Weavers are notorious for holding onto stuff indefinitely.  Since I don’t buy a lot of wool, though there is plenty in the older stash, I don’t have insect problems, at least not that I’ve discovered.  And my studio is on the second floor, so rodents aren’t usually a problem. 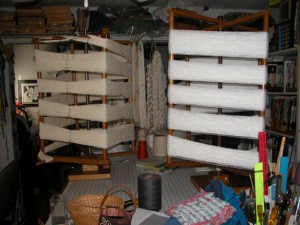 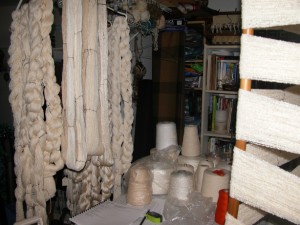 Anyway, my recent decision to go through the natural’s stash, and wind copious amounts of 10 yard warps in various sizes, with the intent of dyeing, made me really look at what I’ve got.  And I made a dent, at least a little one.  And the rumor is from one of my guild members, that my stash is pretty modest.

So I wound, listening on my iTouch, to Barbara Kingsolver’s Animal Vegetable Miracle, her year long experiment buying only local food for her family.  I now know everything I ever needed to know about asparagus, including the fact that I’m most likely never going to start an asparagus patch.

I wound, and wound, and stopped to shop online for Christmas presents, Amazon is a wonderful thing.  My husband has already opened the new Nikon 12 megapixel Digital SLR camera, just to make sure it all works…  🙂 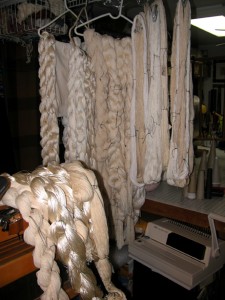 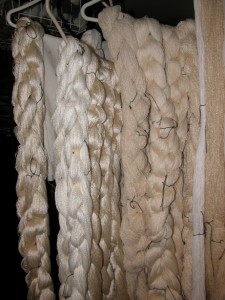 I wound and wound, and stopped to make my family food.  I wound and wound and stopped to change over the laundry.  My arms ache from so much winding.  But I have warps wound and ready for color.  And the best part, the upper cabinets, where I keep much of the naturals stash, is clean and dusted, and repacked and organized, and I think I must have reduced the naturals stash by half?  This should keep me busy for the next year. 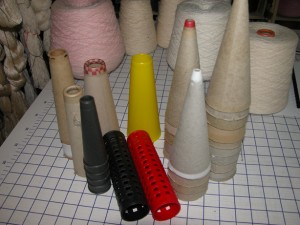 There is something very satisfying about tossing (recycling) all the empty cones.

And if there was too small an amount on a cone to really make a warp that would have enough ends to seriously contribute to a 10 yard length of yardage, I wound it into approx 2 yard skeins with my AVL warping mill.

After about the 10th skein I wound, I thought I should check that indeed the circumference of the mill was 2 yards.  I was sort of shocked to find that the circumference was actually only 70″.  I’m not sure why that is, but using the revolution counter made for some tricky math calculations, # of revolutions x 70″ divided by 36″.  Then I’d know how much was on each skein. 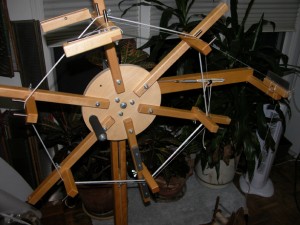 Of course the first 10 skeins I wound are all incorrect.

I did keep a notebook of all the yarns I wound both for skeins and for warps.  I did a yield calculation with the McMorran Yarn Balance, to determine how many yards/lb. and then noted now many ends I wound for the warps, at 10 yards long, and assigned it a letter which I copied onto a hang tag with a Sharpie Marker, so later I’d know what the heck was actually in that warp/skein.

Anyway, I’m tired.  And I’m cross-eyed.  And I’m really really grateful I don’t do the whole Thanksgiving cooking thing.  I’ll get together with my bonus sister tomorrow (she came with the package when my mom remarried a couple of years ago), she only lives a half hour away, and we will share dinner duties, I get the easy no cook stuff, store bought pies and salad fixins, and we will have fun for a couple of hours.  I could use a break from all this white…

So, enjoy your day of gratitude, what ever makes you happy.  Sometimes it is the little things, like a stash dig.  Sometimes it is getting together with people you care about.  Sometimes it is just knowing that for today, the body parts are working and there is a pile of fiber just waiting for the swan dive into…