Well, my boxes have arrived safely in California, and I shipped my Big Sister piece to Kansas City.  I always feel when my work is out traveling, that it is sort of like sending your children out into the world, they get to go places and see things without you.  I have two pieces in Mississippi, one on the way to Missouri, and some inkle looms and lots of samples sitting in someone’s house in Southern California.  Little bits of my self scattered like dandelion seeds… 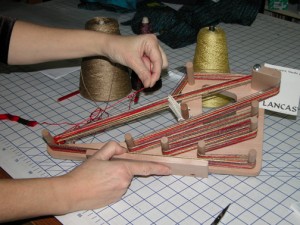 I kept one of my baby Inklettes (by Ashford) behind, (which you can get from any dealer who sells Ashford Looms), because the warp on it was used up, and I needed to re-warp for the conference.  I decided to kill two birds with one stone, (actually that is a terrible analogy, why would I want to kill any birds?) and put on the warp to make key fobs for my guild.

Sidebar: It is very common for a guild to get together and make small tokens of their talent, advertising the guild, for the “goody” bags you receive at the conferences.  My guild chose this year, to send off to the MAFA conference (which I won’t be attending because I’ll be at the conference in Durango) small pieces woven on an inkle loom and made into keyrings.  I volunteered to make 7, which is how many including fringe, you can make on one fully loaded baby Inklette.  I adore this loom.  It’s profile is so small it can fit in the bottom of that same conference tote, or even on the little fold down table on the plane.  (I haven’t actually tried this, since I am too overloaded with computer and projector and all my clothes for a week, when I travel to teach, but my weaving buddy Sally, who travels all the time for work, usually has a bag full of little bands whenever she returns from a trip).  I had given a workshop to my guild, Frances Irwin Handweavers, in inkle loom weaving, and everyone had such a blast, they are all now prolific ‘Inklers’, and always have a new pattern or some interesting pick-up design to share at every show and tell. 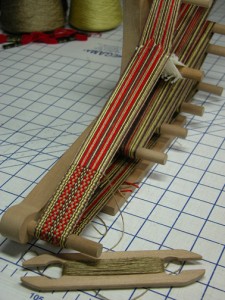 So here I am all warped up.  I had some diversions today, like my Thursday Philosophy Club lunch, there were six of us in attendance, and lots of catching up to do.  I also ran around buying more stuff for props, and of course a trip to my favorite shipper to package my piece for Kansas City.

Tonight I had a real treat.  In preparation for the HS Musical, which is the first weekend in March, while I’m in California of course, the Boonton High School drama club held an open mike talent night.  OMG!  Who knew a bunch of high school kids could have so much talent, so much poise on the stage, and so much presence?  I’m trying to remember back when I was in HS, the most talented kids in the school couldn’t compare to what I saw tonight on the stage.  Even the teachers performed, there were dance numbers, a martial arts presetation, rap, rock, soul, Broadway tunes, and because the school is so culturally diverse, there were some beautiful songs in other languages, duets, and even a classically trained pianist.  I was blown away.  For a small town HS, this was one class A production.

If you want to learn about inkle weaving, it is a simple loom to learn to use, without much fuss.  I sell a monograph on Inkle Weaving, but if you want a little free tutorial, go to Weavezine, the fall 2008 issue, and read the article my daughter wrote on weaving shoelaces on the inkle loom.