Today was a detour day. By that I mean, all that I had planned to do in the studio got pushed aside for other more important things that life has a way of

throwing you. I started the morning by having a colonoscopy. What, you may ask has this to do with weaving? As a breast cancer survivor, diagnosed at age 46, and having just buried a close friend in her 50’s with colon cancer, I am a firm believer that everything in your studio will wait while you do the important screenings that can make the difference between another day in the studio and, well, lets just say for now, I will have more days in the studio. Last month the oncologist gave me a clean bill of health, and my colon is perfect and good for another 5 years. So if you are putting off getting a routine exam, as annoying and cumbersome as they can be, think of all the things you might never get to in the studio… Make it your New Year’s Resolution.

All was not lost, I did manage to do a prototype for a couple of Christmas gifts I have to make for some good friends. I’ve done this technique with scraps of handwoven fabric. There are a number of books out, many by Linda Johansen, on making fabric vases, bowls, boxes, etc. They were the technique du jour in the quilting circles a few years ago.

Last spring, I had done a series of papers, folded and dip dyed, so they came out sort of shibori looking. I wanted to do something special with them. So I dug out my Flexi Firm non fusible thick stiff interfacing, and some Wonder Under, and traced a pattern for a ginger jar from one of Linda Johansen’s books. I fused the paper to the Flexi Firm, with Wonder Under, and then started stitching around all the pieces with a zig-zag, catching in a satin cord on the edges. Once they were all stitched, I assembled them into a star sort of shape, and then hand sewed them into the form of the jar. I’m not completely happy with the top edge, I may try to add beads or something, I’ll see what I have in my stash.


Project number three is also yardage, this one I’ve been sitting on for awhile. There is sort of a story behind it. I have a few favorites of all my palettes I created during the years I wrote the forecast column for Handwoven Magazine. One was the Leaves and Berries palette, from Jan/Feb 2005. It was challenging to dye the warps since I am an inexperienced dyer, sort of by the seat of my pants, and I had to mix four different greens from what I had on hand. I used MX Fiber Reactive dyes from Pro-Chem.
I am not a planner. I just happily see where something takes me, and this yardage is a prime example. I dyed three different white warps, unmercerized cotton, cotton tape (which I had to really scour first to get the dye to penetrate), and rayon. They were all different sizes of yarns, and I had no plan, so I just wound 8 yard warps with as many ends as I could fit on the mill, or until the yarn ran out. Painting the warps independently of each other, meant that the colors were all the same, but the placement was random and different on all three warps.
I liked the imagery of berries oozing on the vine, brambles, so lengthwise stripes with twill vine like columns fit what I was trying to accomplish. Once the loom was warped, I started sampling with all kinds of different wefts. I cut the fabric off the loom after about 12″ and cut the piece into three different widths. The first I kept in my notebook, the second I gently swished in the bathroom sink with some shampoo. The third I finished securely around the edges and threw into the washer and dryer. So I had an idea of finishing and what each weft would do.
I liked the wool singles I tried, from Harrisville, and I liked one of the black wefts, so I went to the Harrisville site and was sad to learn that the cone I’d been sitting on for 15 years wasn’t made anymore. Imagine that. I looked through all my sample books, and found a Mainline two-ply by JaggerSpun, wool, in black, that looked a lot like the Harrisville singles in size. So I ordered it. Weaving this fabric wasn’t the easiest, the different size warps, and different structures had different take up, even though I used a second beam for the supplemental warp, I still had to rig up a third beam that was variable, so I could maintain even tension throughout the weaving. Two by Fours can be a wonderful thing!
When the fabric was off the loom, I threw it into the washer and then the dryer to simulate the same finishing as the sample. When the dryer was done, imagine my surprise when the fabric came out looking like the sample on top, and only a bit over 4 yards long. Shock wasn’t the half of it. But it is important to not look at something the way you expected it to look and if it doesn’t, then you failed, but rather to look at it with new eyes and see what you can do with this new version. The more I looked at it, the more I loved it.
So, now I need to make it into a smashing coat. I have a 31″ width, so I’m hoping to squeeze a good size coat from this yardage. Stay tuned.


Project number two also involves yardage that was exhibited in Tampa at Convergence 2008 as part of the Ebb Tide Yardage Exhibit. This yardage is called Sandstone Layers, and like the previous yardage both are dyed to coordinate with palettes from my former Forecast Column from Handwoven Magazine. Both palettes were featured in the Jan/Feb 2007 issue.

I only have a bit over three yards left of this yardage, but it is 36″ wide. I used the rest of it for a window shade, which also hung in the functional exhibit at Convergence. If necessary, I am quite willing to cut it up for additional fabric to help the cause!

This fabric is handwoven rayon and cotton, from painted warps using MX Fiber Reactive Dyes. Woven on 8 shafts, this fabric is a combination of plain weave, twill, basket weave, and has a supplemental warp. I can see this in a short sweatery kind of jacket. Probably unlined. Stay tuned. 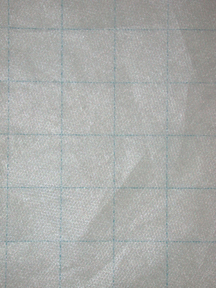 For those of you who have taken garment constructions workshops with me, you know I have always recommended HTCW’s Red Dot Tracer as a pattern medium. Sadly it is no longer available, but the good news is, Pellon has re-engineered their Tru-Grid pattern tracing medium, and it is now stable in all directions. I have tried it with a number of patterns and so far been very happy with its performance. I have changed my webshop http://www.weaversew.com/shop to make this product available instead of Red Dot Tracer. Thank you Pellon!


I received my latest issue of Handwoven Magazine in the mail yesterday, and found Syne Mitchell’s column Weaving the Web, the title this issue is Blog Your Weaving. Syne gave a number of reasons for creating a Blog, and the idea stuck in my head, so much I didn’t sleep the entire night. I was so tempted to get up and work at 4am, but I held off, and now, with the blog created, I decided this would be a good opportunity to cronical my creative journey with 6 new garments, portions of which have already been started, I’ll outline what I have so far in later blogs, and hopefully inspire someone else to just jump in head first and create with what’s at hand.
The first project is what to do with yardage I wove for the Tampa Convergence, where it hung in the yardage exhibit. I have 4 1/2 yards of 25″ width, very drapey rayon and silk, called Frosted Florals, woven with handpainted warps, using MX Fiber Reactive dyes, in twill and plain weave simultaneously using 8 shafts. There were three different rayon and silk yarns used in this yardage, giving it a dimensional surface.
The drape makes me think gown/dress, and I’ve been playing with a couple Burda patterns from my World of Burda magazine that comes in every month. I’m making the garments up first in a commercial fabric to fine tune the patterns and the fit. I’ll add photos as I get some one to take them on me.