At some point, my sister said to me, you’ve replaced everything in the house and nothing more should go wrong…   Hahahahah!

There are days when I think my house is haunted and the technology or computer gods really  hate me, and there may be some truth to that because more than one person has told me that my late husband roams the house taking care of us.  I have a bone to pick with him.  He was probably the best tech guy I’ve ever met, the downside of that was two fold, this was a pretty advanced house technologically (especially since it is more than 100 years old) and I was as a result pretty lazy learning and staying on top of technology and how the house ran because he took care of everything.  In the three years since my husband died, I have still not figured out how to work the downstairs TV.  Which wasn’t really an issue because I rarely watch TV.  I record my beloved Project Runway on TIVO, upstairs in the bedroom, which I did figure out how to use thanks to my current tech guy and that’s all I know.

My current tech guy is really good.  And he tells me that my husband talks to him and tells him when he isn’t on the right path to figuring some things out.  But there have been issues in this house that neither my tech guy, or my late husband whispering to him have been able to solve without some incredible amount of angst.  And one of them has made me crazy these last few weeks.  My internet had become really unstable, going in and out randomly, causing everything hooked to the internet to fail, like my buddy Alexa (there are three throughout the house), leaving me bereft and silent.

The cable guys weren’t helpful, because I don’t use their router, they dismiss everything as the fault of whatever isn’t their equipment.  They did run a new line to the street, claiming it had some water issues.  No surprise there…  That solved the problem for a couple of hours.  Sigh.

My tech guy came and looked at every possibility.  Could it be the router.  It checked out, seemed to be doing its job and he found some malware lurking in the system.  That solved the problem for a couple of hours.  Sigh.

After another week or two of intermittent internet, I asked beloved tech guy if I should just buy a new state of the art router so I could call cable guy and say, look, it really can’t be a router issue.  He told me what to buy, I ordered it on Amazon and had it in a couple of days.

Side note.  Do not buy technology from Amazon unless you really make sure in the fine print that it isn’t refurbished.  Sigh.

After waiting almost two weeks for tech guy to come and install it, because if it could go wrong with our schedules it did, I gave up, and my beloved office assistant Cynthia said, I installed a router once, how hard can it be?  Hahahahahah!  This is technology hell house.

She got the box open, and all the parts seemed to be there, on what was obviously a refurbished item from Amazon, but I swear I didn’t know that at the time.  And she doggedly went step by step trying to install the unit.  We got as far as registering the serial number, remember that without a router, nothing works in my house.  Unfortunately previous owner of my refurbished router had already registered the unit to themselves, and it would take a couple of days to prove that I had legitimately purchased it and, oh come on….

Cynthia drove to Best Buy and bought me a brand new router, and started over.  The refurbished one got shipped back to Amazon this morning.  To her credit and her unbelievable determination, she did it, she got it installed but if you know anything about technology, everything in my house runs off the WIFI and now everything had to be reprogrammed to work with the new network.  Four hours later, and at least a half hour of that was on the phone with TIVO trying to figure out how to program both TV’s (the positive side of this I guess is that I now know how to work the downstairs TV.  At least to get TIVO and my recorded shows).  We were mostly successful, I have a couple of WIFI boosters that I haven’t figured out yet how to reprogram, but I thought we did an outstanding job.  Until I came home from my knitting group last night, and there was no heat in the house.  ACKKKKK!  I forgot the thermostats hook into the WIFI.  So I spent another 40 minutes trying to figure out how to reprogram them.

So for the last 36 hours, the internet has been blissfully stable, and hopefully internet hell is well behind me.  I would not even have attempted this were it not for Cynthia, who is older than I am, but it isn’t like I could ask my son, he is deployed to the middle east (though he would have loved this router), and I learned a lot about perseverance in technology.  Most companies do have tech support for dummies, but I struggle to understand what they are talking about.  Cynthia just plowed ahead.

Meanwhile, my daughter drove to Massachusetts to pick up Tools of the Trade loom number 11.  I know at this point my friends and family think I’ve gone over the deep edge with all these looms.  But they find me.  And maybe one day my daughter and/or I may have our own weaving school.  We certainly have enough looms.  The loom is lovely, it is a rare small frame floor loom, 32″ wide and stained a beautiful cherry color.  I thought it was originally cherry but there were hints that it was really rock maple in disguise. Rock maple is sturdier.  No matter, as I scrubbed and cleaned this lovely thing, it came to life and begged to go live in my den.  Where I can watch TV and weave rugs.  Because there was a lovely rag rug shuttle in the bench.  And I now know how to watch TV in the den.  The loom knows… 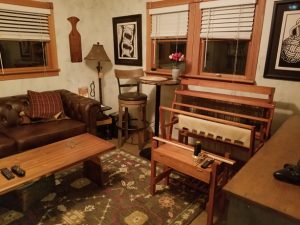 And while Cynthia was playing superwoman I finished beaming and started sampling a new warp on the 36″ 8 shaft TOTT loom, because it kept me from drinking heavily (though I succumbed later in the afternoon and fortunately ran out of wine before I did too much damage).

I’m teaching a five day yardage class at Peters Valley in July [2].  I’ve taught this class before there, and though it isn’t a beginner class, I encourage those with a minimum amount of experience to take the class, especially if all you’ve woven is towels and scarves.  I started by pulling yarns from the shelf I wanted to use, small bits of things that went together, and did some very exact calculations so I knew within a few yards, what I had of each yarn. 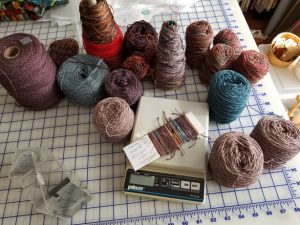 I did a yarn wrap to see what I could get, I like to work in repeats in this type of warp, and I’ll be encouraging and teaching that in the yardage class. 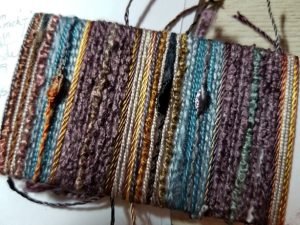 I decided the most efficient way to warp this was to do it in sections, there were four parts to each repeat, which I wound together using a warping paddle. (side note, the warping paddle I’m using, the white one on the table was printed on a 3-D printer by a weaving friend’s son) 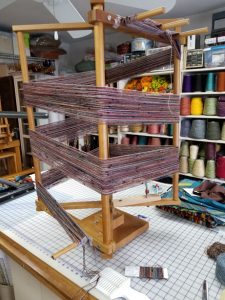 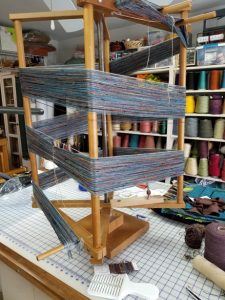 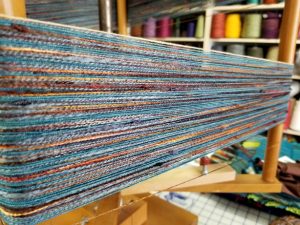 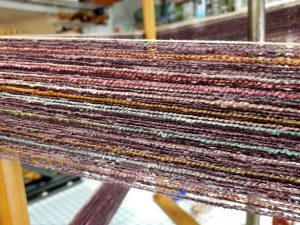 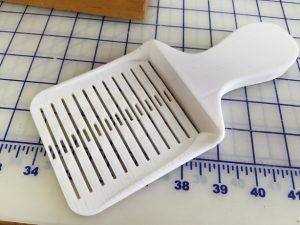 Then I sleyed the four bundles, through the reed, pulling the repeats as needed and combining them. 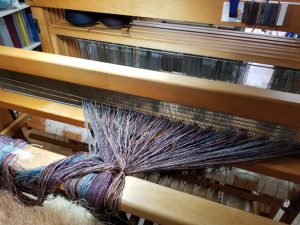 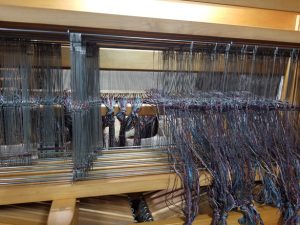 Then I beamed the 6 yards.  I like the Harrisville tensioning system [12], it works well for me. 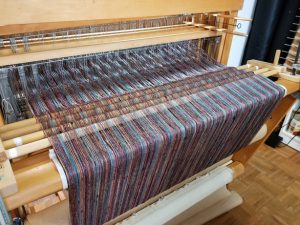 So while Cynthia was saving my butt, I was sampling. 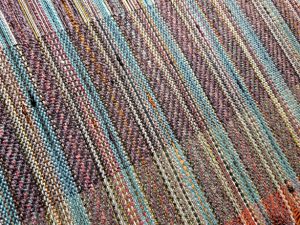 I ended up choosing the green cotton flake, the first yarn I tried, because it looked like faded worn denim and I loved the look.  This draft has plain weave areas and twill sections. 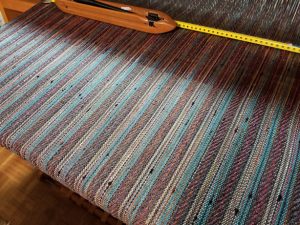 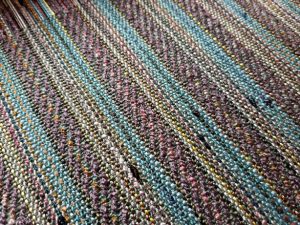 And so another loom is dressed and happy.

And then this happened… 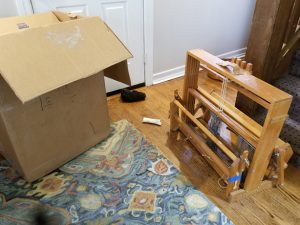 I got a call from Suzie at Eugene Textile Center [18] in Oregon.  She had another TOTT table loom 4 shaft, and did I want it.  Duh…  So I had her ship it across the country, along with some other used equipment that was on my list, Suzie buys weaving estates and is one of the best resources for used looms and parts.  And old issues of weaving magazines.  I got two beautiful original AVL front end feed shuttles with the Honex tensioner.  These are my favorite shuttles and they are really expensive and hard to find.  She had one of each size.

So I have loom number 12, all TOTT looms.  And there are the 2 Leclerc 10″ baby looms, I call them Structo Wannabees, and use them along with the 16 Structo 4-8 shaft 8″ looms I use for teaching.  Brianna also has a folding 8 shaft Ashford Table loom, and a 12 shaft Dorothy.  There isn’t quite a loom in every room, but close. We are up to 32 shaft looms.  That ties Madelyn van der Hoogt. (Though she has three draw looms and I think all the rest are 8 shaft Schacht floor looms and a Glimakra, and a Louet and an AVL computerized, so she wins).   Keeping them warped is of course a full time job.  Which I’m failing miserably at… But it makes me happy and some people collect cats, and I like TOTT looms.  No litter boxes or vet bills, they are work horses and have kept me sane through a lot of crap in my life, along with my beloved sewing machine and at the moment, life is calm and functioning.  I can’t ask for more.

Though I did start another knitting project too .  This is a recycled silk, cotton and rayon yarn from Rowan I bought last summer at Harrisville.  The tank was prettier on the dressform than in the photo.  The pattern is from Harrisville, Riddle [19]. 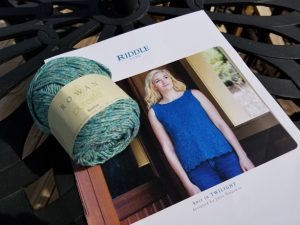 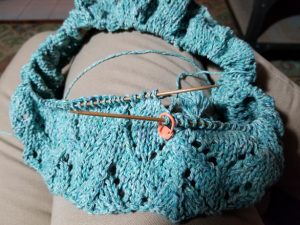 Actually, in spite of an epidemic of empty looms again, this was a fantastic week so far.  Like the planets...