This has been a rather tough week.  Not for me.  I’m fine.  But in a series of really sad, and horrifying events, accidents, deaths, unwanted health diagnoses, and other calamities, none of which I have any control over, it has been rather tough to carry on as if everything in the world is fine.  Sunday alone I went to two visitations at local funeral homes.  None of these events are my stories to tell, but my heart is broken for my friend with a cancer diagnosis, my other friend who lost her father, and a pretty horrific event that, if you live in my area, you know about, and if you don’t, you don’t want to know about, all of which has left me distracted and in mourning.  And there is my daughter.  I haven’t said much about her issues, again it isn’t my story to tell, but she is struggling with her own health diagnosis.  She has left her job to reevaluate her life, and is living in my basement now, safe, but lacking focus and purpose.  She will be OK, of that I’m confident.

When my husband was dying, one of the only things I could think of to keep my brain from exploding with grief, was to steal away moments in my studio and calculate the most intense fabric design, one that even I had to struggle to execute but honestly it kept me sane. It is the banner fabric across my facebook page.   If you read my last couple of posts, you know my goal was to fill all of my beautiful looms with colorful cloth because they have been naked for way too long.  My original 45″ 8 shaft Tools of the Trade loom from the 70’s had been given to my daughter when she moved out a couple of years ago, which left me with glorious space and room for all of my textile-y things.  When she moved back in, she brought the loom back and a second one almost identical which she picked up for $350.  That one got shoved in the guest room. So between us we own 9 Tools of the Trade Looms, manufactured in the 70’s – 90’s.  The great thing about having 9 of the same brand loom is that all the parts are interchangeable.  Which gets to the meat of the story.

Because of my daughter’s health issues, and work schedule and general life style, she had slowly gotten away from the things in life that brought her joy.  I know how it happens, and I suspect dear readers that this kind of situation has happened to all of you at some point in your lives, and sometimes,  many times throughout your life.  I just got off the phone with a coordinator for Florida Tropical Conference which is happening in about two weeks.  I suspect that every person who has ever coordinated a conference has gotten so far away from the simple things that bring you joy, reading a book, designing a project, setting up a loom, knitting a scarf, whatever, that suddenly they, actually we, find ourselves rudderless drifting in a stormy ocean with nothing to ground us.  I would look in my daughter’s eyes and see nothing.  There were no lights on.  Rudderless…

Having left her job for a bit of a sabbatical shall we say, mostly to get her health back on track and to finish school, she woke up last weekend and I reminded her, having just updated the schedule on one of the guild websites I maintain, that the guild challenge was due in April.  She looked at me aghast.  When she signed up last year, life looked very different.  Suddenly her eyes sparked and the lights went on and she dove into her basement dwelling and came up with her laptop, weaving software and the plans she had shelved for her challenge project.

Meanwhile, I needed to dress one more loom, my 36″ 8 shaft Tools of the Trade also sat naked in my studio.  It was depressing every time I entered the room.  And so it began. I came up with a really complicated warp design, spent hours with my weaving software.  She wound her 12 yard warp using my mill (hers is packed in the attic) while I used a small 4+ yard warping board propped on  my ironing board.  I was building my cloth around a 4 1/2 yard warp I had obtained in a Kathrin Weber Dye Class.  I’m not sure if I dyed it or if Kathrin did as a demo, but there it sat and it was my trusty assistant who said, “When are you going to use that warp?”  I pulled all kinds of things from my shelf, including some cupcake dyed skeins I also did in that class.  For those who are curious, cupcake dyeing is where you wind a ball on a ball winder, and then pop it in a deli container with about an inch dye and let it absorb into the ball.  Flipping the ball over and putting in a different color makes some great effects.  I wound a total of 11 warps for a cloth about 32″ wide.  Most of the warps were rayon, and very slippery rayon, the kind that you have to really keep under tight control, and then of course, my daughter’s cat had to be in on all the fun.  I won’t bore you with cat photos, they are all on my facebook page. 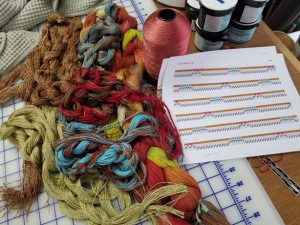 She had a narrower warp, dishtowel width, so she finished before I did.  Next step before sleying the reed is to find out if you have enough heddles.  Those are the wire things with eyes on each of the shafts that the warp ends go through, which allows you to create patterns.  This is where the story has a bizarre twist.

Sidebar:  I’ve had trouble with my smaller Tools of the Trade looms, and breaking warp beams and brakes because I load too much on them and require too much torque to get the tension I like for weaving.  My little 25″ looms weren’t probably designed for 12 yards of warp.  I had done some alterations to the brake on one of the looms and had the bolt shear off.  Some of this is because hardware from other countries is getting cheaper and thinner and not able to withstand what I need said hardware to do.  But I digress.  I have a number of sectional beams in addition to standard beams for my small 25″ looms, which are of course interchangeable.  The sectional beams have more substance but the kind of warp I’m putting on doesn’t work well on a loom with no packing. Too much variation in the warp threads.  I got the idea a number of years ago to pull the sectional pegs from one of the warp beams and use it as it if was a standard warp beam.  In the photo you can see a second warp beam still with the pegs and the upper one has had the metal pegs pulled out. 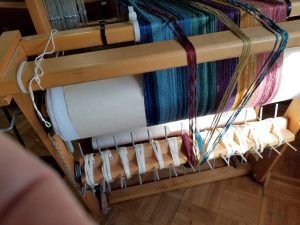 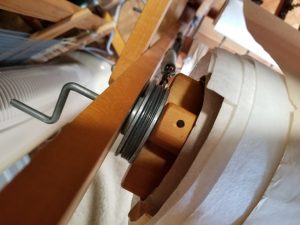 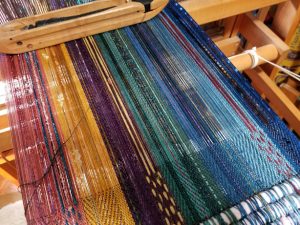 It worked well for what I needed, except when the bolt for the ratchet sheared off, and I had to replace it with the original handle.  It is hard to tighten a beam with 12 yards of warp and paper packed on it with that little L shaped handle.  I would have much preferred a ratchet like on my large looms.  Meanwhile my daughter had moved away with my large Tools of the Trade, for more than a year and I had the room renovated and bookcases installed and a lot of detritus tossed in the process.

I got the idea that if I could put the perimeter metal pegs back in, it would give me a better grip on the beam when I wanted to tighten it.  So I went to find the pegs.  I remember storing them in a container, a small basket I thought, and though the room had been redone, it shouldn’t have been hard to locate that container.  Gone.  I’ve been searching for two years for that stupid container of pegs.  I don’t lose things.  I’m fastidious about cleaning up after myself, putting things back in their place, and if I wasn’t, I could never do the job I do traveling around and having everything I need to pack right at my fingertips.

My daughter was removing the shafts from the large loom to count the heddles on them.  She needed  about 700 heddles for her project.  So each shaft got pulled, and she started the count.  She had developed a counter weight system for the project she had previously been working on using suspended film canisters on the front shafts, filled with whatever, pennies, I had no idea.  She needed more weight on the front shaft for whatever she was doing, I didn’t much pay attention because the loom wasn’t with me for the last couple years. 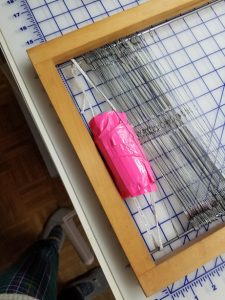 She started peeling off the pink duct tape wrapped around the film canisters and cried out, “OMG”!  I looked over and there, stuck to the duct tape wrapped around each of the film canisters were all of my missing sectional pegs.  All of them.  She had pulled them off the shelf a few years ago, needing additional weight and never happened to mention it because, well why?  I wasn’t sure whether to kiss the earth in celebration for the return of something I definitely needed for this new run of scarves, or to kill her.  There are no words. 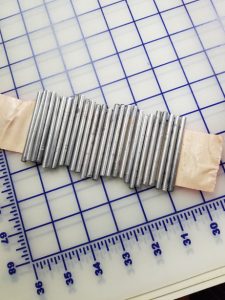 So at this point, I’m beginning to count my heddles as well.  I need something like 1200.  It was pretty obvious that between us, we did not have enough.  All of our nine Tools of the Trade Looms use the same 10 1/2″ inserted eye heddles.  But all of them were warped with the exception of one of the table looms which I was keeping in reserve in case I need an emergency warp for an article I’m working on.  There were extra heddles on the other looms, but they can’t be removed once the loom is warped.  So I ran to the internet and knowing WEBS ships pretty quick, I ordered another 400.  I hadn’t gotten notification that they had shipped, and it is now Thursday and I’m getting desperate, we were battling for who got the heddles, there were enough for one of the looms but not for both.  I called them, and the order hadn’t been shipped, and wasn’t going to be shipped until the following Tuesday, so I added another 200 and spent a ridiculous amount on overnight shipping which still meant that the heddles wouldn’t arrive until Monday because unlike Amazon, UPS doesn’t deliver on weekends.  We are getting so spoiled!

Meanwhile we did what any self respecting couple of desperate fiber artists would do, we stripped the poor remaining table loom of all of its heddles.  Poor thing.  We had enough to get us going and when the heddles came in yesterday, I carefully put the table loom back together and all is well.

So I sleyed my warp… 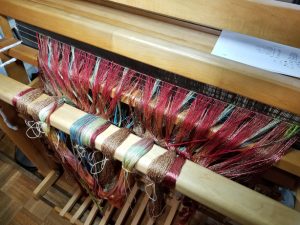 Then I threaded it. 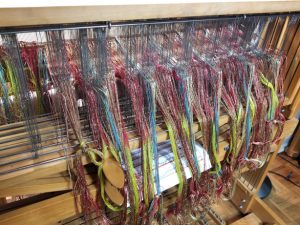 Meanwhile she was all warped and starting to weave. 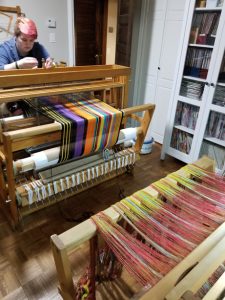 Then I beamed my warp.  It is so luminous, shimmering and just plain pretty. 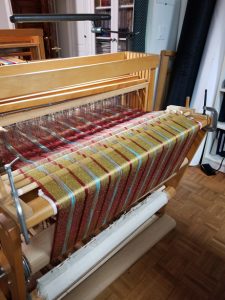 And now, my 36″ loom has a pretty four yards of warp for a fabric that will one day become a garment, but first it has to travel around, I just got an email that Peters Valley needs a faculty piece from me for the summer faculty exhibit.  So I have to get cracking on the weaving… 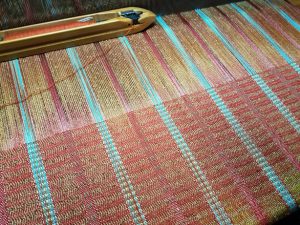 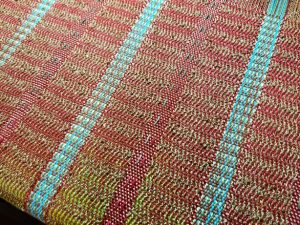 And Brianna’s dishtowel warp which is built off a photograph my husband took at Baltimore Inner Harbor of the beautiful lights reflecting on the water in the Harbor, is on its way as well. 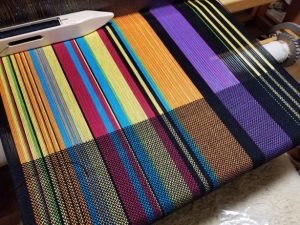 Actually California has been and gone.  I'm back, and no rest for the weary, I hit the ground running.  Why...