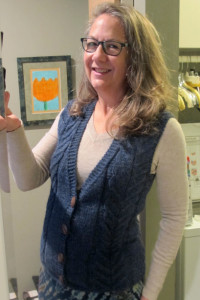 I finished my cabled vest.  I was worried it was a bit too small.  Fits like a glove.  (DROPS waistcoat, Berroco Peruvia Wool)

Honestly I didn’t expect to get this finished until about February when I started traveling again, since I mostly knit when I’m traveling on planes.  But then I found myself sitting endlessly at radiation, at chemotherapy, at doctor’s appointments.  Waiting…  Waiting… Waiting…

Knitting is good.  It is portable.  It doesn’t attract attention the way an inkle loom would, or kumihimo or something that isn’t readily recognizable.  I’ve had some lovely conversations with others in those waiting rooms, about knitting, or crocheting, or wanting to knit, or failing to be able to knit as a child, or about relatives’ who knit.  And there were a  couple of woodworkers too who jumped into the conversation.  Anything to talk or think about something positive and fruitful that comes from the hands, and not the reason we are all gathered waiting, in the first place.

There was a woman across the room from me yesterday in the infusion center, as I sat knitting my little vest.  She was knitting something grey, sitting next to her husband, not looking at what she was knitting, while the two of them watched the little personal TV they give you.  My husband full of sleep inducing drugs, slept through most of the hours we were there.  At one point, the woman across the way came over and asked me in the lowest of non disturbing voices what I was knitting.  There was a knowing nod between us.  I showed her the small picture of what the vest would look like from my crumpled and well marked up internet directions.  She smiled and said it was pretty.  I asked her what she was making.  I couldn’t tell much from way across the room.  She said she was knitting a hat, she does that in between projects, hats for the chemo patients at the cancer center.  Hmmmm…..

OK, I’ll admit I’m horribly selfish when it comes to what comes off my loom or off my needles or whatever.  I’m known as a pretty generous instructor, I’ll tell you anything, probably more than you want to know, I’ll readily share drafts of things that are mine to share (obviously not copyrighted stuff).  Crap, I’ll even help you make it.  But I don’t give away what I make, I enjoy it myself and I suppose that works for me.  The truth is, this is one of the few things I do for myself.  I make things that make me happy and proud when I wear them.  I bow to those who tirelessly knit for charity, weave for a cause, give away all the socks they knit (see the Yarn Harlot’s latest blog post about her sock drawer).  Truth is I’ve knitted 12 pairs of socks.  They are all in my drawer and I wear all of them.

I have started weaving dishtowels, and giving them as holiday gifts to really close friends and family, and the occasional wedding present or two, but I’m still selfish with them. 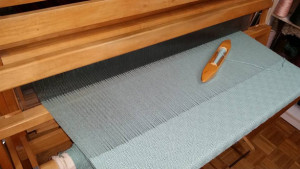 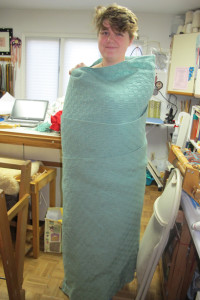 Even my daughter, faced with a bag of 30 skeins of sea foam acrylic yarn taking space in her closet, set up my loom, enough to weave five baby blankets, to use up what she had.  My daughter is not pregnant nor is she planning to be in the near future since there is no significant other on the horizon with which to share this milestone.   But her peers are starting to have babies, and she thought it might be an idea to get started weaving gifts. 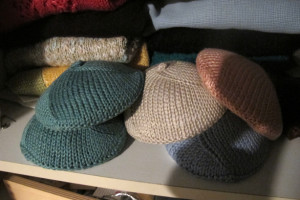 Last March, I was teaching in Colorado and one of the participants in my class approached me at the end and showed me a knitted breast prosthetic she was working on.  She had learned during the class that I had undergone treatment for breast cancer many years ago and had not had reconstruction.  She asked if I had seen these knitted prosthesis and I had heard of them, someone from my knitting group had told me about them, but not having issues with my silicone one, except for the ridiculous expense  since insurance barely covers them anymore, I hadn’t pursued it.  She asked for my size and reached into her bag and pulled one out.  She apparently knits them for www.knittedknockers.org.  She makes them and then gives them away.  Another service knitter.

Eventually I got around to trying this cute little “knitted knocker” and can I say my life was transformed?  Really that isn’t an exaggeration.  You can’t know how comfortable this little puppy is, just perched inside my bra, comfortable, absorbent, and weightless.  I immediately went to the website, and downloaded the directions.  (Note that she had already given me a copy, but I was standing in WEBS and thought I should pick up a couple of skeins of Pima Cotton and didn’t have the directions with me).  I can get three boobs from one skein.  The skeins were on sale.

The point of the above rambling is I want to knit more of them for me.  In fun colors.  The website will send cancer patients these knitted and donated knockers for free apparently, but I can knit my own.  I just don’t want to knit and give them away.  I know.  Selfish.  I wouldn’t have ever known about them or tried them if a student hadn’t been generous and given the one in her bag away.

To all of you who do service work, your efforts are appreciated.  A lot.  And there is a place for you in the great yarn store in the sky when all is said and done.  I’m hoping you’ll let me visit once in awhile, and that my generous contributions during my classes will be enough to let me drop in for tea now and then.

I’ve already planned my next sweater project, and of course it is for me.

We all give what we can in one way or another. I have time and energy to give weaving demonstrations to elementary school classes and to one of our favorite hiking/biking places, Brown Canyon Ranch in Southern Arizona. But like you, I keep my knitted stuff for myself. I have enjoyed reading your blog for some time now. Keep up the great job.

One can only do what one can do……….I too do about what you do but I will definitely look up that knitted knockers…what a GREAT name.

Funny I get so much more satisfaction seeing someone else enjoy and wear my items than wearing them myself…I guess its because I am mostly homebound and don’t need warm sweaters and scarfs…and so I make for others to enjoy…my most favorite thing to make for charity is preemie hats…I feel its so important to give these little guys/gals a bit of love to help them along.

No one should ever accuse you of selfishness, Daryl…your heart is as generous as they come. I will always be grateful for your sharing of the experiences of your breast cancer surgery, which preceded mine by about seven years…it made my own emotional reactions so much more rational. Your husband is so lucky to have you in his corner during this fight.

Please be more generous to my friend and teacher. You were instrumental in the set-up at Peter’s Valley, you give very generously in all your lectures and classes, you gave fiber and/or fabric to one of your local guilds for a fund-raising sale, my goodness woman, what do your expect of yourself? Please don’t waste time beating yourself up for not giving more. Oh, yeah, don’t forget you have and keep a garden, then put up what you produce. You are a wife and mother too, just in case you forgot. In my opinion, for what it is worth, you… Read more »

You give all of yourself in your workshops, and it’s more than acceptable to reserve something of your own. Knit away and keep everything. It’s only fair. As far as infusions go, only the best will do, so you will have something small in a huge wilderness to look forward to. Try knitting with cashmere or angora of something that’s a real treat. I save books (sometimes hardcovers) that I really want to read and have bought for myself. Or a music CD or a DVD of a comedy would work. Treat yourself and best of luck to you both… Read more »

You gotta do what you gotta do. No apologies. Love the vest – great color and shape and fits you well. Thanks for the knockers tip. Good idea for chemo knitting. I’ll make some.

Oh, but you are giving and making a difference — just look at all the knitters here whose lives you’ve touched. Spread the word and give away the pattern at all your workshops and you’ll touch more lives than you could do knitting on your own. Barbara, KK founder, is generous about making their cards available. She says to always carry their card when you’re knitting in public because people will ask about what you’re knitting. So contact them and I’m sure they’ll send you business cards as well as pattern instruction cards.

Random on a Wednesday…

I know I'm overdue for a blog post, but life here, as you might imagine is a bit scattered and...