I always enjoy watching the pole dance that celebrity actors do when a new film is about to release.  I know that they finished up their part in the film probably a couple of years ago, and it has been in post production ever sense.  Most likely they are on to filming something else, and yet, when a film is released, they are called back to promote it like it was yesterday.

I write for a lot of different magazines.  Back when I wrote regularly for Handwoven magazine, I would submit my feature probably six weeks before press date, have the edits to me within a couple weeks, and everything was much more timely.  Madelyn, my editor back then, knew my work and knew what I gave her needed little editing and I could just fly in at the last minute with something usable.

Now I have short deadlines (two weeks if I’m lucky) with most of the magazines I contribute to, but the lead time is sometimes a year out.  Back in January, I wrote about a jacket I made, and the problems I had with the pattern.  The jacket was for an article I was writing for Sew News Magazine.  Everything was shipped to them, and I was actually paid last March for the article.  Each issue I’d wait, and…. no article!  I wrote them and they said the article was actually for the October/November issue, and it would be out sometime in September.  I’d almost forgotten about it at this point.

Unlike other publications I write for, Sew News never shows the final copy to the contributor, which is always a scary thing.  They have assured me that in the future they will submit for final approval, which is good news since the minute I opened the magazine that appeared in my mailbox while I was away last weekend, I saw a couple of glaring errors in how the illustrations were done.  They interpreted my photos into illustrations but I hadn’t seen the final results until the magazine was printed and sent.  Frustrating…

But…  Let me say that the seven page spread is beautiful.  The illustrations are very clear, and there are a lot of them.  The two mistakes are small and though a bit confusing, not critical to the overall understanding of the technique, how to make Triangular Bound buttonholes.  They assure me that the corrected illustrations will be on the website. The jacket photographed well, and I can’t wait to get it back so I can start wearing it.  I love they way they styled the model. 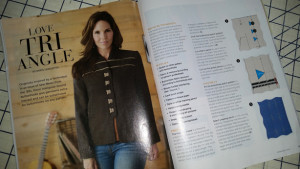 These buttonholes are pretty cool.  They are actually easier than regular bound buttonholes.  The issue should be on the newstands now, October/November 2015 Sew News

Congrats! Looks like a beautiful spread in the magazine.

I am blessed to have the current issue in my lap, when the kittens will let me use my lap as I choose. I didn’t find any errors but haven’t read the article closely. It is a beautiful jacket!

Hi Daryl
I love seeing photos of your looms, (and all the other fascinating and wonderful activities you share), particularly the Structos. If ever you feel the need to off load any of them, let me know. I’d love to have one here in my studio in Adelaide, South Australia!

Looking forward to picking up a copy! I have a question. Do any of your pre-recorded web classes teach how to make the “Daryl Jacket” with Handwoven fabric?
Blessings

When Astrig Tanguay Facebook messaged me last year about applying to Fiber College of Maine, I had no idea what this...