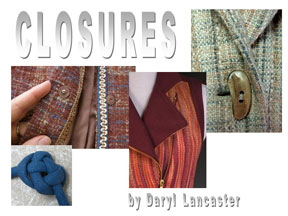 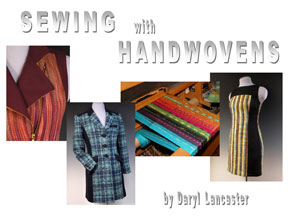 This has been a particularly crazy week, because my husband is home, for just a couple weeks, and I forget how quiet and easy my life is with no one around.  Normally it is sweet and lovely to take a break and enjoy my husband’s company but this week has been frenetic and chaotic, since we are refinancing the house, dealing with the total loss of my daughter’s car and all of that insurance hassle (in all fairness, the insurance company has been wonderful, it is just one more thing to deal with), buying a new car ( I pick up my new Rav4 tomorrow at noon), moving through the 2011 taxes, and a myriad of other things that had to be put off until my husband returned.

He is an amazing person, in that he can walk in the door, with almost no jet lag (from Saudi Arabia), and uncomplaining just pick up the pieces and move forward.  He is a much better person than I.  I would be a complete b**ch!  He takes things in stride, only gets cranky with me just a little bit, and can research new car models and best prices around in the blink of an eye and get the job done.

I on the other hand am struggling to keep up the creativity in the studio, hold up my end of the bargain, accompany him on demand, “Daryl we need to get the Total Loss Claim forms notarized”, teach a couple of inconveniently scheduled online classes because who knew I’d have all this going on when I booked them a couple months ago, and prepare for the arrival tomorrow night of my band weaving rival John Mullarkey.

John and I are friends, we have taught at conferences together, and have a friendly rivalry going, because John is an expert at card weaving, and I teach inkle band weaving.  Both methods produce some pretty amazing bands, and they couldn’t be more different in technique, though both can be done on similar looms.  John is teaching in Connecticut tomorrow, and I’m teaching an inkle class at a local museum on Sunday, so the plan is for John to hop a train from Hartford to Newark  tomorrow night, and we will pick him up, and he will accompany me to the workshop Sunday at the museum.  I will return him safely to St. Louis on Monday.  Promise. 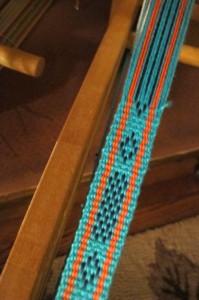 So here is the dilemma.  I have a naked inkle loom.  Normally naked looms are not problematic, I have so many it isn’t possible to keep all of them dressed at all times.  But my two larger inkle looms are usually full of something really special, complicated, something that will inspire students, challenge me, and make everyone exclaim, “Ohhhh” when I show the loom off in a classroom setting.  One of my larger inkle looms has nothing but a Pick
Up sampler I use for online teaching through Weavolution.  Though it will be handy for my workshop on Sunday, it isn’t eye popping.  The other large inkle loom is naked.  As in, nothing on it.  The impressive band I had on it for a couple years has been woven off and made into this vest. 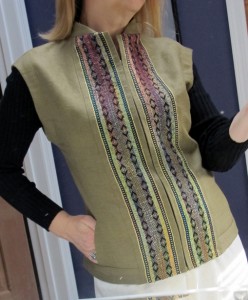 So, with John coming to visit my studio, and knowing I needed something really eye catching on it, because well, we are in a friendly battle here for who can generate the most “Ohhhh’s” from a work in progress, I decided to take the small supply of needlework yarns and fibers I picked up on a going out of business sale at the “Lacemaker” last November when I taught in Cleveland. 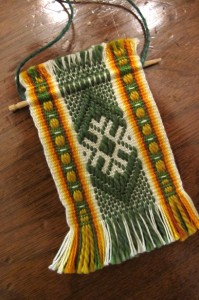 I looked through my box of pieces I use for show for classes, and I came across this little gem.  It is my most favorite piece of inkle weaving in my collection and I didn’t weave it.  It was actually a gift, it came in a thank you note, and I am mortified and embarrassed because the note got separated from the little 3 inch piece of weaving and I don’t know who wove it.  I’m really really hoping they are reading this blog and will identify themselves.

Anyway, I love this little piece, and it always generates lots of “Ohhhhh’s” whenever I show it.  I figured out it was a 19 thread 2:1 pick up, the most I’ve ever done is 7 threads.  And it took awhile but I think I figured out how they did the little bumps up the side.  I’ve wanted to reproduce this, not because I wanted to copy it, but because it was a stretch for me and I wanted to see how it was done. 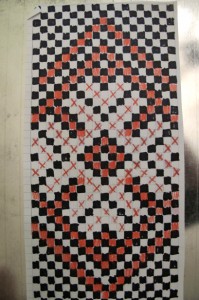 The box of #10 crochet cord and rayon floss that I picked up in Cleveland would work perfectly, and I drafted a color sequence and then a pick up chart.  That took most of an afternoon.  I started warping, made a couple stupid mistakes (yeah I make them, get over it…) and finished up warping the loom at my knitting group last night.  I started to weave and was really really disappointed.  I hated it.  I mean hated it.  So I did some adjustments, and ripped out a second metallic color I had used, 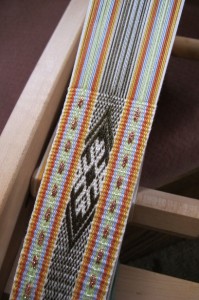 which made the whole thing look like a Mummer’s Day parade (If you are from Philadelphia you know what that is…), and I tried again.  It seemed better until I started in on the pick up.  The scale of the threads I used are small and particularly hard to see, so I used powerful magnifiers, but I carefully followed the draft, it took almost an hour, but I finished one repeat last night around midnight, and stepped back and squealed in such delight, I shocked myself.  I love this.  I keep staring at it.  I dragged my husband and my son into my studio today (which is normally not something I ever do, trust me) and even they were impressed.  So John, top that… 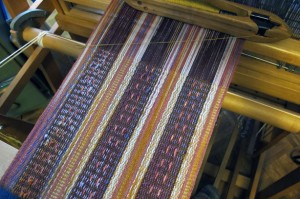 I did get the scarf warp on the loom from the pile of yarn in the last post.  I added in a couple of darker sections and completely changed the look of the yarns.  I won’t really know if I like the whole effect until I weave a scarf and wash it, but I don’t really care, I’m pretty confident they will be pretty, since they are hand painted and interesting.  And it is something on the loom from leftover warp I found in the cabinet.  A freebie…  I should net four scarves from this puppy… 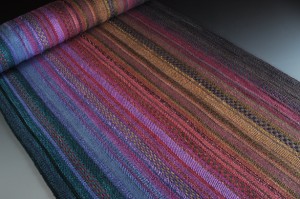 And on a much better note, I got an email letting me know my yardage was accepted to the yardage exhibit for Convergence Long Beach.  It sort of made up for the Small Expressions disappointment.

And so, my daughter is due in shortly from college, my uncomplaining husband got in the car this morning and drove to Connecticut to the salvage yard to strip her wrecked car of all essentials, plates, EZpass unit, new car stereo, etc. and then swing by University of Massachusetts to pick her up for spring break.  She will only be here this weekend since she heads back up Monday in my old Honda wagon to spend her spring break acquiring certification for artificial insemination.  That’s my girl…  Some kids go to Ft. Lauderdale for spring break, my daughter goes to a slaughterhouse in Pennsylvania to learn how to get cows pregnant without sex.  Works for me…

All is fair in love and inkle band wars…

John M has nothing on you!

Never a dull moment in the Lancaster household. Love all you do, as usual. Will you be teaching this new structure on the inkle loom in Weavolution?

The 19 thread pick-up is just a more complex version of what I already teach in the pick-up class. The pick-up bauble on the side is just a variation on the 1:1 pick-up name draft, which I do teach and will be developing for Weavolution in the coming months.

Love the 19 thread pick-up, beautiful. And thanks for the mention of John. Where was he teaching in CT?

Daryl, would you be willing to share the draft for the 19 thread pickup? Or can we buy it somewhere?

I occasionally write about what inspires a project, or adventure.  It might be a trip, or it might be a...