In spite of a really unfortunate series of events, the week in Michigan ended on a high note.  On Sunday, my friend Ginnie, who began as one of my students at Siever’s, whisked me away from the bad karma at the Midwest Conference and we started the trek along Lake Superior to her home in Marquette.

But before I get into that part of the trip, I wanted to show a couple of photos I took of some of the winners I selected at the Midwest Conference fashion show.  As exhausted and out of it as I was for the judging, the body of work in front of me was probably one of the most exciting, colorful, creative group of garments/accessories, of any of the recent conferences I have attended, and definitely the most exciting I’ve ever seen for a conference in the Midwest.  The east and west coasts of this country, especially the west coast tend to be more influenced by European/Asian garments, sensibilities, design, and designers.  The Midwest has a different palette, landscape, culture, and purpose.  And work there shows that sensitivity.  I was delighted to see so many colorful garments, with multiple processes, dyeing/spinning/weaving/felting/appliqué/kumihimo, etc.  sometimes all in the same piece. 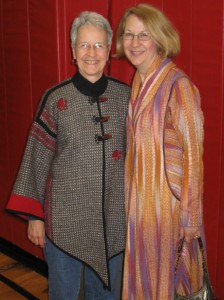 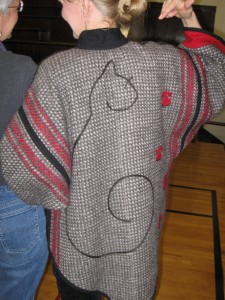 Yet, some of the simplest designs rang out clear and strong.  More is not always better, but I always thought that it is better to throw everything you have at a piece, and then learn to carefully edit, than to be so timid that you never take a chance.  I was limited to only a couple of awards, which was a shame, I could have awarded so many more.  My favorite piece, was one by Peggy Bowman, from Beavercreek, OH.  I’ve followed Peggy’s career for a long time, she is so gifted, and what I loved most about this piece was the inspiration, her cat Spike and how this piece was dedicated to her fiber soul mate.  It is a sweet story and it is clear that the feline imagery is carefully integrated into the hand spun and hand woven garment, and it looked terrific on her and on the stage. 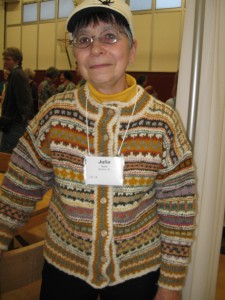 Then there was an amazing piece from Julie Hurd of Bellaire, MI.  OK, this still makes my head explode.  This sweater is handspun and hand knit.  OK, that itself is pretty great.  But what made me swoon is the fact that the spectacular colors of this sweater are all from mushrooms.  You know those odd fungus things in the yard and on trees?  Apparently they produce some gorgeous colors and Julie has mastered the art of mushroom dyeing. 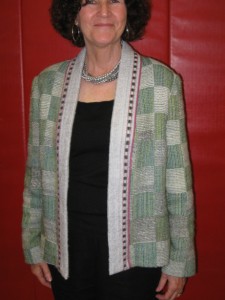 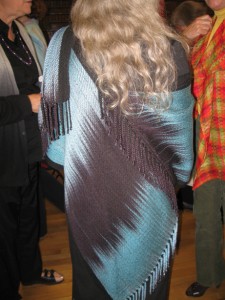 There was a category for Judge’s Choice, and I kept coming back to this lovely simple but really really elegant jacket from Alie Thompson from Harvard, IL, woven in wool, bamboo and linen.  And all fashion shows carry a theme, this one was no exception.  The theme was Lake Superior Seasons, and the show itself followed the four seasons as the garments were modeled across the stage.  When this simple shawl came across my table for judging, this is one of those garments that just causes you to inhale and exhale very slowly and deliberately, because in its simplicity, it achieved perfection.  This handwoven Tencel shawl was hand dyed in a palette that really reflected its title, “Superior Breezes” by Georgie Hurst, of Marquette, MI. 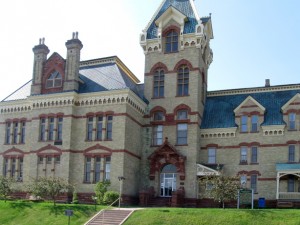 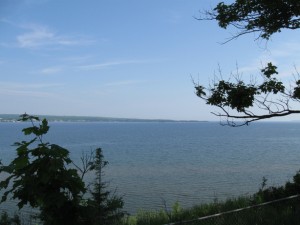 So my friend Ginnie took me from the conference, weak and exhausted, and drove me along Lake Superior, in some glorious sunshine and scenery, exploring some spectacular architecture, like the Houghton County Courthouse, and the beautiful shoreline. 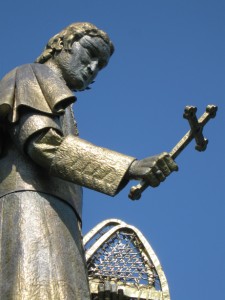 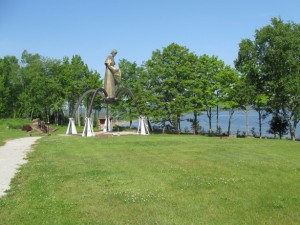 We stopped at a cultural oddity, the Shrine of the Snowshoe Priest, Bishop Frederic Baraga (1797-1868) where this 60 foot brass sculpture presides over the bay, up on the cliff, and if I had had a copy of Weird Michigan, I’m sure this would have been on the front page. 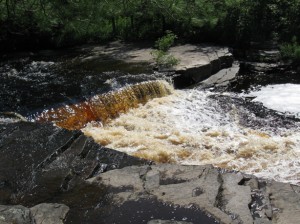 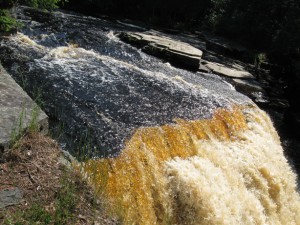 Ginnie and I stopped at the Sturgeon River Canyon Falls, and hiked the easy trail to some really interesting sites.  The water here is stained with tannins, so this golden liquid went careening over the rocks, ending in a spectacular splash of foam. 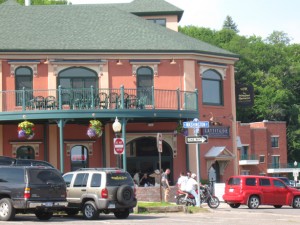 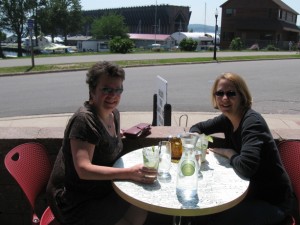 Once in Marquette, we stopped at a lovely waterfront restaurant, called L’Atitudes, where we ate white fish tacos and drank Mojitos.  We sat in the sun and absorbed the healing rays. And Ginnie showed me some of her favorite spots including the view from a local park influenced by landscape designer Frederick Olmsted. 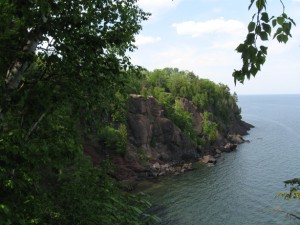 We also visited world famous Donckers Candy store in the downtown area of Marquette, where President Obama visited last February.  This was one of those cultural treasures, each jar and tray had some glorious sugar confection 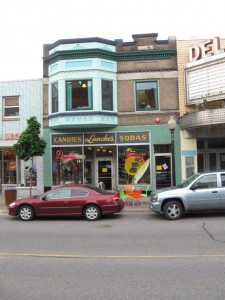 from times past, and some new variations like gummy army men, which I bought for my son.  I picked up a box of my most favorite candy, butter almond crunch, and a couple other treasures.

Ginnie and I mostly played in her house, eating some great meals, and wandering through her enormous stash.  Ginnie wins.  I’ve never seen such a lifetime collection of fabrics, fleeces, yarns, and equipment.  Every room is filled, and I think Ginnie was beginning to feel lost in it all, it takes someone else coming in sometimes with a fresh perspective to get you back on track.  I know I have had friends in the past do that with me.  I would feel like I was drowning in my own studio and suddenly a new pair of eyes would bring back all the enthusiasm of why I love what I do in the first place.  We all need perspective like that once in awhile.  I came home looking at my studio thinking I need to get my own house in order too.

So Tuesday night, I boarded a plane, and flew home, the Cleveland/Newark leg in first class.  I had a Margarita, and settled in.  Of course I haven’t stopped since I got off the plane, all kinds of chaos was waiting for me, but that’s all a normal part of having young adults in the house, and a husband overseas, and being the glue that holds it all together.  The glue melted a bit this week, but it is starting to harden back up.  Stay strong…

Hi Daryl, What a lovely community of friends you have – how lovely to be ‘rescued’ just when you hit bottom so to speak. I read a poem by Patience Strong [20thC.English Poetess] called Time In Hand. It is too long for here so I am going to copy it into an email for you because it fits us all – but your name jumped out at me when I read it the other day. Do copy it and paste it if you think it appropriate sometime. I hope you continue to recover. Best wishes from England. Maureen.

Glad to hear you are on the mend and feeling better. Enjoy your stay at home, however short it is…

So glad that you are feeling better………what a week. Until reading your blog of the week I thought that your life must be so charmed, you make it look that way. I am sure others have felt the same way, you are charming, funny, knowledgeable, and incredibly creative and a wonderful teacher. You are very strong, most of us would have said that we just cannot be there for the conference………not you……….what an inspiration.

Thanks for the Midwest review. As much as I enjoy living in New Mexico, I do miss attending that conference. Oh, and I know Peggy Bowman, so was happy(!) to learn of her success.I like Julie Hurd’s sweater too. In fact, all the pieces you showed are great.
Happy to hear that you are feeling better. I wondered about your health during the time you didn’t blog.

And you had enough energy/spirit to do all that on the way home? Girlfriend!!! You deserved a Margarita indeed.

Love the itinerary and experinces…especially the golden water falls. How beautiful. I see a pallette for a wool tweed there……hmmm.

Your pictures of my beloved home state are wonderful! I am now so homesick I can’t stand myself….makes me miss the breezes of Lake Michigan. Those wonderful breezes are no where to be found out here in my new home of Utah…sigh. Glad to hear you are feeling much better! Sure wish I could have been up north to experience the workshops you gave.

Daryl I love your write up about the winning garments for Northern wefts 2011 Fashion Show. Thank you for doing such a professional job in Judging this event for us despite your difficulty getting to our remote area. You did not mention the Honorable Mention Garment woven by my friend Leanna Franklin. She worked very hard on her garment and she is very proud of the results. Leanna Wove this fabric on a 2 harness Union loom that her husband restored in their Restored Log Cabin workshop near kewaunee Wisconsin.

I’m sorry Mary, I loved Leanna’s jacket. When I was wandering around the reception with my camera, I couldn’t find Leanna to take her picture. I only mentioned the garments I had photos of. Leanna’s garments, woven on a two shaft loom from handspun wool and alpaca, were some of the most beautiful fabrics I’ve ever felt in a handwoven garment. That’s why I wanted to give her an honorable mention. I’m glad the committee allowed me that extra award.

Daryl Gets Done In…

I don’t quite know where to begin with what happened over the last week, at what should have been a...