Yesterday was one of those “jello” days.  (The kind where no matter hard you try, you feel like you are moving through Jello… It started out with great promise, I got to sleep in since my daughter had delayed openings at the High School for three days, something to do with the lower grades having standardized testing and the seniors being herded into the auditorium for the requisite lectures on drugs, drinking and driving, and date rape…  Prom season is upon us…

Anyway, my list seemed do-able, plus I had a lunch date with girlfriends, at the sushi place.  Always a treat.  I did accomplish a little off my list in the morning,  but not nearly as much as I had hoped, and suddenly it was noon.  So I dropped what I was doing and raced into town for sushi.

So far so good.

Still on my list in the afternoon was 1) Cleaning the rest of the kitchen, 2) working on the Jacket, 3) weaving a scarf, 4) playing around with images to start another small art piece on the Structo.

I managed to come up with a couple of ideas for the art piece, I went into the kitchen planning to scrub the floor, and turned around and went back to the studio.  A message appeared in my inbox on the computer, from one of the guild members inquiring about topics for the business meeting at tonight’s guild meeting.  Crap.  The guild meeting was that evening, and duh, I’m the program…  Held over from the cancelled meeting from last month, I was giving my new guild lecture on Warping the Loom from Front to Back.  There goes my to-do list.

OK, so I had about another hour before I had to leave for the meeting. So I looked at the to-do list, and thought to myself, I can knock out a scarf in an hour, no problem.  It was already started anyway, so this should be a piece of cake. 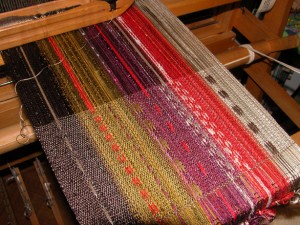 So I started to weave.

This is hard to explain.

Sidebar: I put these scarf warps on using the AVL warping mill (if you are not a weaver, this will more than likely make no sense, just know I had a mess, and skip to the next paragraph).  It works great, I love the tool, except there is the assumption that the sections of warp you are winding are more than likely all the same type/size of yarn.  In the case of my scarves, they are not.  I have five clearly different sections, with totally different yarns, plus supplemental ribbons, and the warp beam is very small, 1/3 yard per turn, and I’m putting 15 yards on the loom.  I’ve had problems with the sections building unevenly, the more yarn on the loom, the larger the circumference of the beam, and the more chance the sections won’t be exact.  I’ve managed to make it work more or less up until now, but this time, it was pretty clear, no matter how I viewed the situation, this wasn’t working.  The entire left side of the warp build up incrementally so the warp really sloped upward on the beam to a point where I had tight on the right side and soup on the left.

In a fit of total disgust, I removed 20 inches of weaving, hurled it on the floor, and started to unwind the entire 15 yard warp.  In a pool onto the front of the loom.  I had to stop and go to the guild meeting.  It haunted me all night.  And of course I was lecturing on Warping from Front to Back.  Obviously I didn’t do that on this warp, since I used a sectional method.

I came back from the meeting and stared at the loom.  It was 11:00pm at night.

There was nothing else to be done.

So I grabbed the warp, and continued to pull it all forward, into a large pile of yarn on the floor.  It was hellious to pull forward (that’s probably not a word, but in this case it is accurate).  Many of the yarns are fine and doubled.  They were switched around on purpose when I threaded.  They didn’t come off the loom without a fight…

I ended up with this. My daughter walked into the studio on the way to bed, and took one look and said, “Good luck with that one…”, and immediately exited the studio… 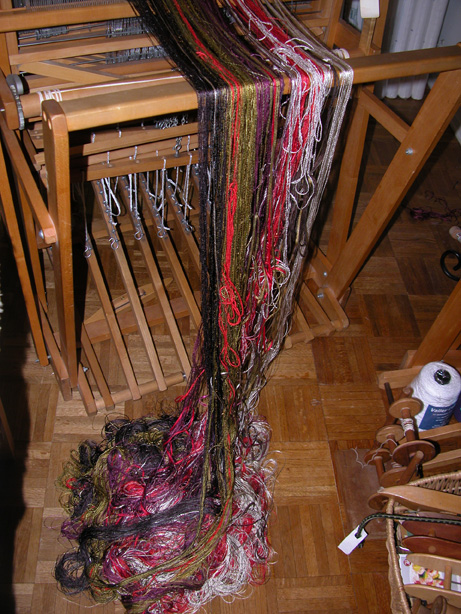 To re-beam the warp, I needed to create tension, just like I illustrate in my booklet Warping Front to Back.  This warp is mostly slippery rayon.  I needed a lot of tensioning sticks (they are really least sticks in disguise).  I went into my stick barrel, which is tucked into the corner behind my laser printer, which I had to move out of the way to get to, and rooted around for my two sets of lease sticks (total of four).  I found three.  Crap.  The barrel was so overstuffed with wrapping paper, brown kraft paper, and all sorts of stuff that just somehow ended up in there. I hurled everything that shouldn’t have been in the barrel across the studio floor.  I was on a roll… 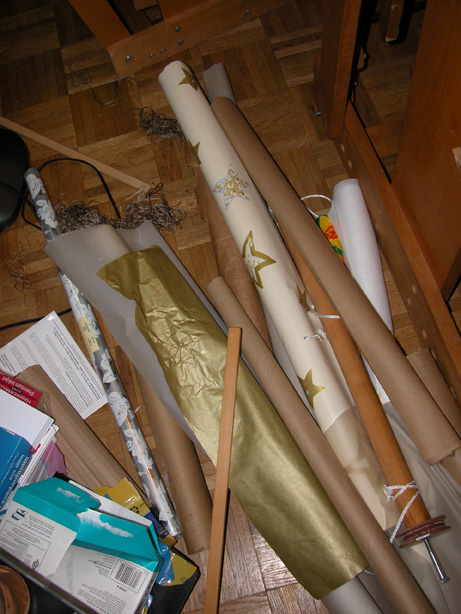 This is what the barrel looked like after I hurled all the overstuffed debris from it across the studio floor. 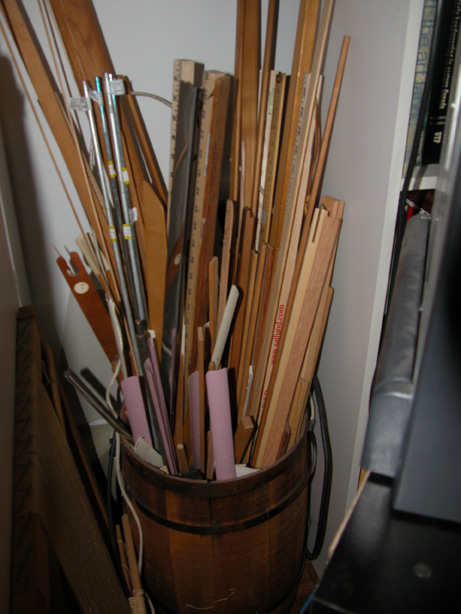 I found my four lease sticks and set to work, carefully stepping over the carnage…

Once in place, I began to beam.

It was about 1 in the morning. 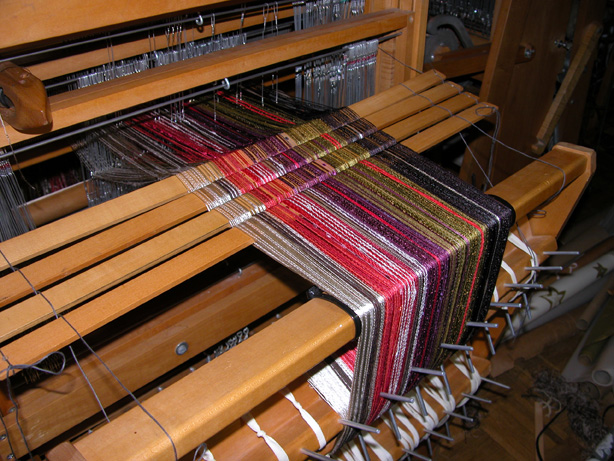 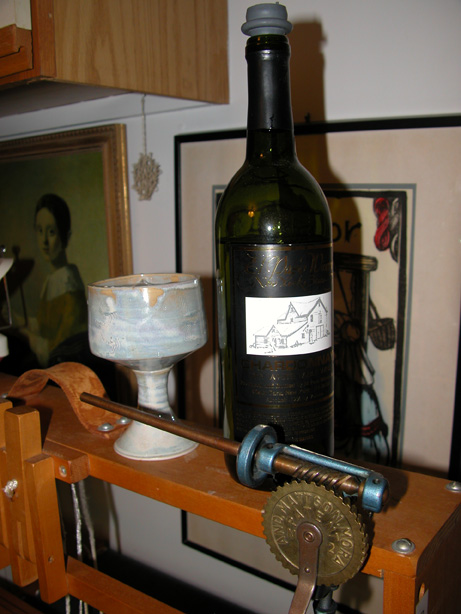 The warp stretched out the door of the studio, down the stairs, all the way to my bedroom. 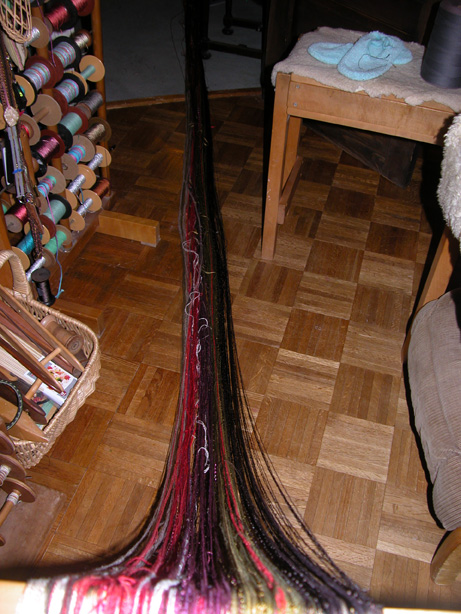 At 3:30am I went to bed.  I figured I’d work until I finished beaming, or I was too drunk to beam, and then I’d deal with the carnage either way in the morning.  This is what I woke up to. 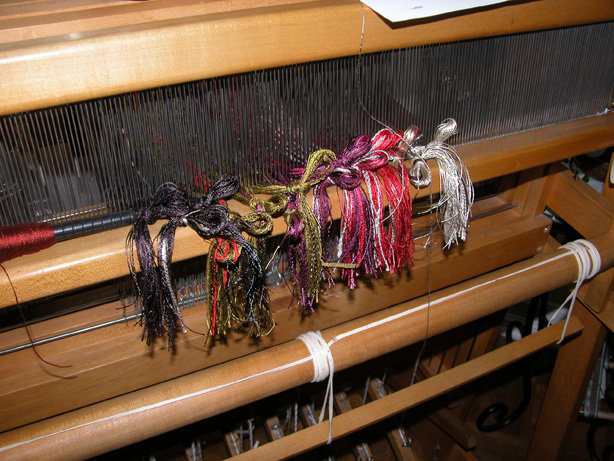 Well now, HOW IS THE HEADACHE this morning? Keep a post on the progress of this latest creation. Looks exciting! Love the colors.

Weaving is definitely a place where stubborn persistence is A Very Good Thing. Apply alcohol as needed.

You deserve a hug! and pffffft….so there! to that ornery warp.

I can’t tell you how good it feels to know that these things happen to you too! My apologies for such an unsympathetic comment, but that pool of yarn on the floor looks so familiar… Glad your assistant helped you get it all sorted in the end 🙂

Guess things went awry after I we talked, can’t blame this on me being out of the country!

My weaving students will love this story. Thanks for sharing and making us all, beginners included, feel better about our tensioning problems.

Did the brownies come to finish it while you slept? Or did you finish it in some sort of blackout? Hope to see you tonight.

Wow, Daryl, am I impressed at your persistence. And your ability to make that warp behave after imbibing… (Imagine me bowing from the waist with arms outstretched in reverence :^)) Mega respect!!

I LOVE IT – Now I know I’m not the only one! This was a great post, many of us have been there/done that!

Must have been something to do with the phase of the moon or the postition of the heavens. I went home from the same meeting…got into a project over my head, and applied IPA (India Pale Ale). Went to bed about 2 something. Forgot I had to work the next day…barely made it. Good to know I am not the only one who does this stuff.

Your presentation at the meeting was great. I learned bunches. (Thought you looked a bit ruffeled for some reason). 🙂

Hmmm, I have never thought of going for the assistance when I’m up at that hour trying to warp a loom – or what ever I’m into. . .

Great job! I’m with the house pixies! Be sure to offer them a suitable reward, too. :>) Jennifer, on the road to recovery, sore throat/ear ache gone, just a cold in my face!

My new cottolin tubes arrived, yesterday. I was still too sick to jump up & down. Not today, however@!!

All this and great photos, too! Amazing…glad to hear someone else hurls things around when they refuse to cooperate!

THANKS!!! I’ve reached the point of “heap on floor” before, but didn’t believe it could be put back on. So – you’ve encouraged me. But th bottle of wine is still MUCH more appealing. And – thanks to Brianna, too?

The only part of this blog I can relate to is the bottle of wine. DFS

My favorite blog to date. I felt like I was there with you,
When the fairies are done at your house could you send them to me? Glad you had the help.
Guess its a sign of a good woman, not letting the facts get in the way of having a good day.

Smiles and outright chuckles as I read this post this morning. Great lesson in 1. perseverance 2. Letting your feelings out constructively (i.e. throwing contents of barrel on floor in disgust ends up with organized barrel) 3. Inviting a guest (wine) into the fray and still managing to warp the danged thing. Way to go, Daryl! You rock!

Glorious.
With, as the kids these days say, awesome-sauce.
Props to your tomtar and nissen (Swedish farmhand-type brownies/house elves who would also, if they existed, approve of your tool-barrel sorting methods).

A dreary Monday, yes I'm getting letters.  Nice to know my fan club misses me when I am holed up...