It’s a silly title I know, we really don’t have much control over anything, but I’m trying really hard to capture some control over my life, my house, my kids, (OK, not my kids), and my studio since I’ve been back from all my worldly travels.  My house is getting cleaned, and the piles of debris are slowly disappearing.  I’ve tossed a lot of things that were once food, but now look to be a dyestuff.  I’ve gone to the grocery store countless times in the last week (what, we’re out of toilet paper?), and I’m just enjoying a sane pace that involves working in the studio about 12 hours a day and the rest playing happy homemaker.  I know this seems odd, but I’m enjoying cooking in my own kitchen, making reasonable meals, and getting some control over my diet.  Though it sounds like a dream life, eating on the road, in restaurants all the time, but it has it’s downfall, and I’m struggling to fit in some of my pants, and I refuse to go shopping.  Watching my portions and gaining control of the ratio of carbs to protein and increasing my vegetables will make all the difference (she says with total confidence as she pours six bags of candy into a bowl in anticipation of the five trick or treaters that will come to the door tomorrow…)

My son helped me clean the downstairs today.  It was good to be with him, as he sorts his life out and makes decisions about his future.  His latest plan is to move over to the army and go active for four years, deploying to somewhere in the world where he can do his army thing, meanwhile I treasure every second I have with him, even if it sitting next to him in between dusting and tidying, while we watched the Rally for Sanity in Washington DC on TV this afternoon.  We both adore Jon Stewart, and I nearly fell off my chair shrieking with glee when Jon Stewart brought out Father Guido Sarducci for the invocation.  My son had no idea who he was, and why would he, Father Guido Sarducci was one of my favorite Saturday Night Live characters from the 1970’s, I adored his “Five Minute University”.  Father Sarducci hasn’t changed a bit!

Meanwhile back in the studio… 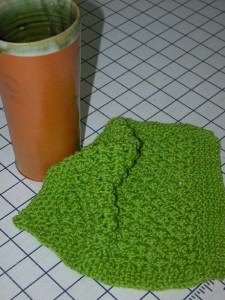 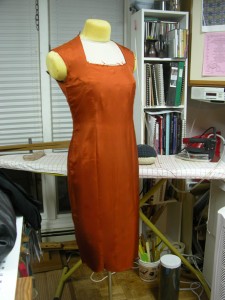 Things are progressing nicely, I jump from one project to another with the speed of someone who is out of Ritalin.  Did I mention I have ADD?  Did anyone who ever met me ever doubt it?  I love jumping from one thing to another, tossing in a load of wash every now and then, and checking on my emails in between.  I finished the dishcloth, and am making wonderful progress on the silk dress.  It is actually together, and I just have the facings and hem.

My dyeing escapades consume most of my mornings.  I can’t tell you how much your comments helped me in rethinking how I handled this whole dye affair.  I also spent a lot of time emailing and chatting on the phone with my best fiber buddy Candiss Cole, who is an expert dyer.  See, here is my problem.  Candiss sent me a ton of small cones of white raw silk, each one had maybe 250-300 yards remaining.  Once the cones get that small, they can’t wind 60 yard warps, so they just trash the remainder.  I gratefully get the trash.  The problem is not the silk, but the fact that I’m using MX dyes to also dye rayon and tencel at the same time.  One fiber is protein, and the others are cellulose.  MX can dye both, but the results on silk are unpredictable and the processing is different than what you’d use for rayons. 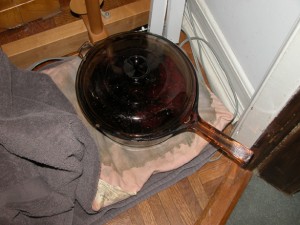 Trying to figure out how to efficiently dye seven different skeins and have them all come out consistent and rich in color, not muddy which the silk has been doing, has been a real test.  I’m not a good dyer, no training, just what I’ve gleaned from other dyers and from reading and from Pro-Chem’s website.  I largely warp paint, so inconsistent results are not a problem.  And I rarely mix up the same color again, so consistency isn’t a goal.  It is now.  I’m not looking to get the silk to dye exactly the same color as the rayons, actually I like that it comes out different, I just want it to be a happy color and not a sad color. 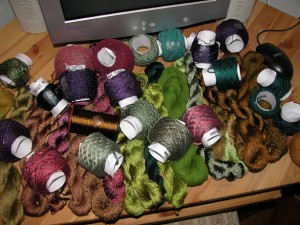 Each morning I rinse what sat and cured over night on a heating pad in the corner of my studio.  I took the advice of the reader who talked about working the dye through the yarn in a bowl instead of painting, and I took the advice of Candiss and her husband Rodger who is the chief dyer now, and stopped using vinegar with the soda ash, which was giving me mud.  I also now scour the silk, it has really helped, and I only soak the rayons in the dye activator, not the silk, and I add salt to the dyebath.  Lots of it.  That was Candiss’ advice.  She told me how important the PH was, and I found that soaking the silk in dye activator or soda ash was creating too high of a PH, so letting it share a dyebath with other yarns that were soaked in soda ash, not soaking the silk directly,  made all the difference.  I get a happier color. 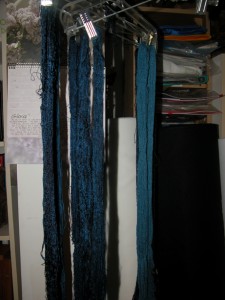 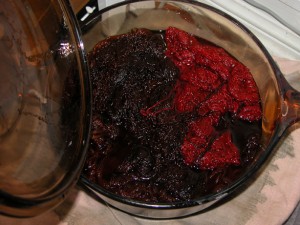 Yesterday’s color was Victorian Blue.  It is a pretty shade.  Today’s color is Butterscotch.  I think tomorrow I will try Tangerine.  I need some good oranges.  I have a wonderful selection of yarns to chose from already after only a week’s worth of work.

Meanwhile, on the loom…

Progress is slow, this is a complex warp, five different chains, I work from front to back so I know it all works, making the reed substitute for lease sticks.  I’ve got the warps all sleyed, and now I’m doing the threading, which is going a little faster.  It took longer to count all the heddles and add to the shafts additional heddles, in some cases more than 150 each.  Since I am weaving full width on the loom, there can be no extra hanging around on the sides.  I can’t wait to see this fabric beamed and sampled.  That’s the part I love most, seeing it all come together.  This kind of a fabric is fun to weave, with every advance of the warp, there is a new color combination. 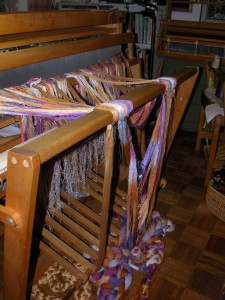 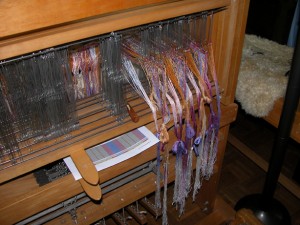 Daryl, that dye pot looks to be iron. Ok…it’s lined. But any small bit of iron in the dye bath will make the color sad. Stainless steel soup pots make the best dye pots.

I love the fact that you multitask with your projects. I too love to work that way, I move from playing with colour on canvas to palying with it on the loom. I have not tried to dye yarn as yet, but I imagine that bug will grab soon enough!
I really enjoy your blog and reading the perfect mix of daily life and work. Thanks for all the invaluable information shared in all you tasks.

Lucky you – being on the receiving end of those small bits of silk! I am very jealous!

Peggy, the dye pot is glass, an old Corning Visions pot I keep around for such a purpose. The butterscotch color is gorgeous, rich and clear and not muddy at all. Back to rinsing!

I'm like a kid in a candy shop.  I have some time now, to really dive into my studio, start...