As promised, I have some great photos of my gardens, or more correctly, our gardens, since none of this would exist without my husband, I’d have a lawn and lawn service, or better yet, I’d probably be in a condo.  But my husband loves to play outdoors, and he is pretty good at it.  He isn’t afraid of hard work, digging out ponds, running electrical conduit, planting a dozen trees, building decks and patios.  And I am the beneficiary of all that work.

Before I get to the pictures though, I want to mention my evening last night, I attended what was I’d say the most fun concert I’ve ever been to, in Maplewood NJ, who knew all this even existed.  First some background.  My good friend and neighbor Deb, has a daughter, a senior in HS, who is wickedly talented, has a voice that moves me to tears whenever I hear it, and is planning to attend college for music, theatre and fine arts.  A local Glee Club offered a scholarship to a senior who was planning a career in music, and my friend’s daughter, Larissa D’Andrea, applied.  She won the scholarship, and had to perform at this glee club’s spring concert as part of the deal.  I didn’t know much about this Glee Club, actually I don’t even know what a Glee Club is, but I went to hear Larissa sing.  The rest was superfluous.  Well, was I in for a treat!  This was an outstanding concert, if you are from anywhere in NJ, this is a not to be missed group.  It is a men’s glee club, they’ve been meeting on Monday nights since the 1940’s, some of these guys are pretty old, and yet, they sang their hearts out, fabulous songs, great harmonies, and accompanied by a 19 year old prodigy, Billy Test.  It is worth a visit to his website, he is so gifted, and you can hear him play on the site. One of the sets was done by a sub group called the Doo-wop Preservation Society, and that was even more fun.  And of course, the highlight was Larissa.  Her mom did a little camera recording, shaky at first, but it settles down eventually, and she posted it on youtube, and if you want a real treat, check out this voice.  Larissa is singing “On my Own” from Les Mis, which is one of my favorite songs.

OK, now for a real treat.  My husband picked up a couple of flats of annuals, so we spent the cold dreary day planting all the deck boxes and hanging baskets, we had massive thunderstorms last night, which brought in a cold front, and I heard it is dropping down into the 30’s tonight.  I think the plants will be OK, there aren’t frost warnings, so I’m crossing my fingers. 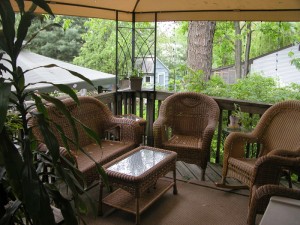 This is one of three decks on the back of the house.  This one is accessed right off the kitchen, I love to sit out there in the morning sun, and have my tea, though it has been too chilly so far, it will soon get warm… 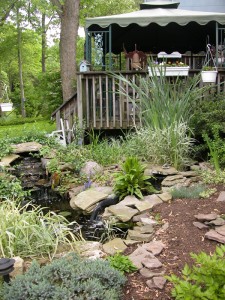 Below this deck is another one, where we have the eating area, and butting up against the lower deck is a beautiful pond and waterfall.  The sound of the waterfall is very soothing while dining. 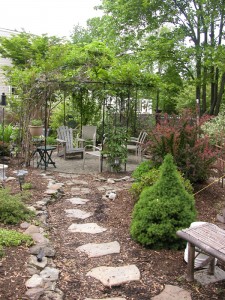 From the pond, there are two paths, the first travels to a beautiful iron gazebo with a circular patio, the above ground pool is immediately to the right, but there is a cast iron  Chimera off this gazebo and it is great to sit out there on fall nights, when the air is chilled, and be kept warm by the fire. 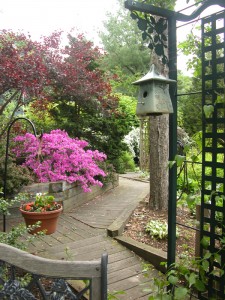 The second path to the left, takes you on a plank walk to the second pond/waterfall.  We have a gorgeous azalea which wakes up the whole yard when it blooms. 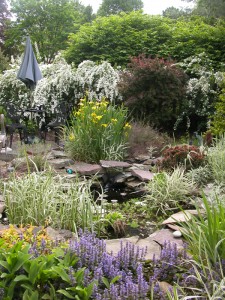 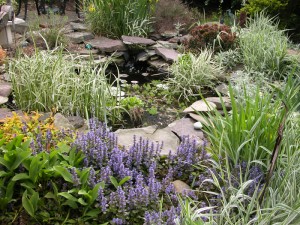 Finally, if you continue on the path, you end up in the front 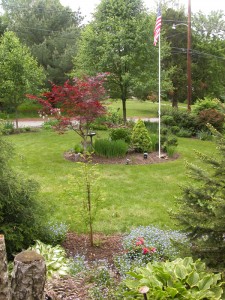 yard, and this is one of the views of the front, side yard.  We actually own two lots, the house sits in the middle of the first lot, with the cherry tree in front of it, I showed that photo a couple weeks ago, but this is the view of the front of the other lot.  The little tree in the center front foreground is the Dawn Redwood Sequoia I wrote about in a previous blog.  It will become a huge tree, and produce some pretty decent shade I’m thinking, and really become a corner stone of the house.  You can see the stump of the clump birch we had to fell, which was dying, to make room for the little sequoia.  So far all the plants are doing well, and I’m enjoying the colors and inspiration from the garden, everything is so lush and fragrant.  We live on a dead end street, so the traffic is minimal, and the wildlife abundant.  It is our little half acre of suburbia, and I’m really grateful for all of my husband’s hard work, because I could never have done this on my own.

Wow!! What an inviting outdoor area!!! Hope you enjoy plenty of time there til the snow flies again!

As I too am an avid gardener, your photos were an unexpected treat! Gardening is such a wonderful complement to weaving.

Project Two and some ponderings about life are keeping me busy...