First off, my cold is getting better.  I’m starting to feel like me again, and I’m catching up, my house isn’t so cluttered and dirty, and the sun is shining.  So, all is well again in the world.

I had what I call a puttery day.  I caught up on housework, went through some paperwork, filled another book order, and sat down to weave off the second scarf from the workshop last week.  This one wove like butter, I still had shredding problems because the reed was the wrong size for the warp yarn I was given, but I dealt with that.  Loosely spun novelty 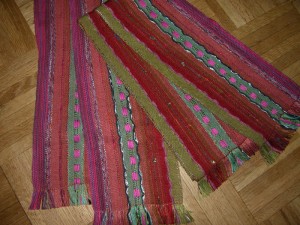 knitting yarns need to be in an 8 dent reed or less, not a 12.  Sadly I was told to bring a 12, so the yarns were shredding like crazy.  C’est la vie…

The scarves turned out so pretty.  Largely that was because Barbara Herbster, the instructor has such a great feel for color.  That alone made the workshop worth it.  So now I have two lovely scarves, I will donate one to my church service auction on Friday, a fun fundraiser, following the spaghetti dinner.  And I’m already poking around in my stash looking for what I have so I can put on another warp and not have two naked looms.

I spent the afternoon in this building. 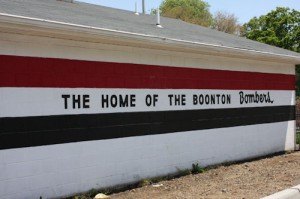 This is the snack bar for the Boonton High School Athletic Fields.  Last year this time, the new athletic fields were being completed, and since they are the most ‘state of the art’ fields in the County, the County Track finals are being held at our High School fields today and tomorrow.  So they needed volunteers for the snack bar, and my daughter called and asked if I would put in a few hours.  It is actually an easy job.  I haven’t worked this concession stand before, so I stood and watched for awhile, and soon found a need. I took charge of putting salt on the frozen “soft” pretzels and getting them heated in the oven.  I found I could fit 16-18  in the oven at once, and it was clearly one of the most popular things on the menu.

Actually, “soft” pretzels are one of those comfort foods from childhood.  Sidebar:  I grew up in a southern NJ suburb of Philadelphia.  If you ever lived or traveled regularly to Philadelphia, you know that soft pretzels there are definitely not like the soft pretzels from NY.  They come in strips, the long narrow soft pretzels are torn off the strip, and covered in copious amounts of yellow mustard.  My fondest food memory as a child along with Philly Cheese Steaks and Hoagies…  My dad use to treat us to soft pretzels when we went to the Audubon Shopping Center, outside the E.J. Korvettes, there was a pretzel stand, and a strip of three soft pretzels was 25 cents.  Since there were three of us, we all got one, covered of course in yellow mustard.

OK, so I stood in the snack bar today, salting and baking  a few dozen NY style soft pretzels.  And while they were baking, I was filling containers of Cup o’ Noodles Soup with water and production line heating them in the two microwaves, so they’d be ready when someone asked for a cup of soup.  Oddly enough, that was a popular item as well.  And even odder was the fact that very few candy bars were being sold.  We basically sold out of soup by the end of the track meet.  Could it be that kids are starting to eat healthier?  Probably skewing the statistics, these were all 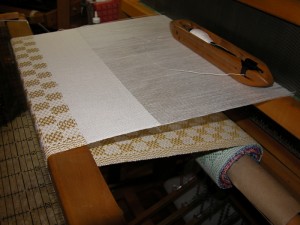 athletes.  I get to go back tomorrow, and since I am more flexible with my work schedule, I will go in earlier to get the hot dogs cooking, the meatballs heating, the coffee brewing, and the soft pretzels baking.

I sat down tonight, and wove another placemat for the guild placemat exchange.  The cloth beam is filling up.  I will say that I’m really enjoying weaving these mats, I rarely ever weave anything for the home, so this is a real treat.

I was born and raised in Philadelphia. My favorite foods were soft pretzels, hoagies and pizza. Haven’t lived there since 1965 though and South Alabama doesn’t know about these treats, at least the variety produced in Philadelphia.

Hummmm….
That looks like the placemat for Elizabeth Eddy or Jerri Shankler, based on the golden color.

Yep, that was Elizabeth Eddy’s placemat. I’m impressed Sally, and no, I haven’t done yours yet. Yours is next… I already warned Bri that the clock is ticking and she only has a couple more weeks to complete her last four mats… Oh the job of being a nagging mother…

A catch-up day, checking in on my favorite bloggers, and who knew, I was the winner in one of my...